The conclusion to our 10th anniversary dinner was giant chocolate chip cookies, from Top Chef Just Desserts competitor Erika Davis' Elimination Challenge-winning recipe. Called "the ultimate" by one of the competition's judges, I found it was basically just a variation on the famous Toll House cookie recipe, substituting baking powder for half the baking soda and adding a lot less salt and vanilla. 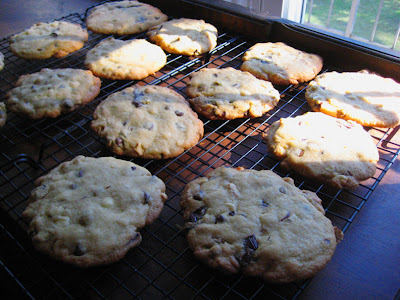 The addition of baking powder kept the cookies from spreading, which I liked. After the initial test batch of somewhat tall, puffy, cookies, the second batch got some manual flattening before baking. I also upped the vanilla. Because I like it.

A search through the pantry revealed a scant 3/4 cup of chocolate chips, so I filled the remaining 3/4 cup with white chocolate chips, cinnamon chips, bits of broken dark chocolate candy bar, and a dash of cocoa nibs. We were also out of walnuts, but had plenty of cashews and pistachios.

They were good - crunchy rather than crispy, at least when eaten the same day they were baked. Storing them in an air-tight plastic container left them a bit less crunchy, but no less tasty. However good, I wouldn't consider these "the ultimate" by any stretch of the imagination. I still haven't found that particular cookie.

Cream the butter, sugars, and eggs together then add the vanilla. In a bowl combine the flour, baking powder, baking soda, and salt. Add the flour to the butter mixture in batches, mixing to combine. Stir in chips and nuts. Scoop dough in generous 2-or-3 tablespoon dollops, flattening with your hand to about 1/2 inch thick. Bake 10-12 minutes until browned.
Posted by theminx

I love the size of the cookies. I think it is not the ordinary size. But it is still beautiful.

Did you ever find and try the Jacques Torres recipe in the NYT? I have it but haven't tried it yet. I tried the Ad Hoc recipe that had been posted on Serious Eats and thought they were good, but not the "ultimate" either. Could have been the humidity that day, however.

I do have the Jacques Torres recipe printed out and stacked in my "to try" recipe pile, but not the Ad Hoc one. Maybe I should try both at Christmas.