Saturday night was going to include a trip to Fogo de Chao for an Orgy of Protein, Brazilian-style, but three cancellations from our original party of 5 caused us to scrap the idea entirely and have dinner elsewhere. A quick perusal of the Restaurant Week menus and Open Table reservation availability led us to dine instead at Donna's at Cross Keys. Mr Minx and I ate there once a few years ago. It's one of those places that has pretty good food, but is out of sight, tucked away in Cross Keys, and thus out of mind. Plus, there's a Donna's across the street from my office, and I've been none too happy with them for a while now.

Rather than adhering to Restaurant Week's new New York-style $35 prix fixe fee, Donna's offered three courses for $25.10. A real steal, as their food is hearty and filling, and the portion sizes are more than reasonable.

We started out with two salads - the Granny Smith apple salad and the roasted beet and arugula salad. Mr Minx wanted more dressing and less gorgonzola, and I wished the beets had been left in the oven a skoche longer (one would think that after almost 20 years of roasting veggies, they'd get it right by now), but otherwise were happy with them.

For my entree, I went with the pan roasted salmon fillet with a wild mushroom ragu and orange butternut squash puree. As you can see in the photo, the skin was hit with such high heat, it was practically blistered (a.k.a burnt). Beneath this ultra-crisp layer was succulent, perfectly-cooked flesh. I so wish I could make salmon this way at home! 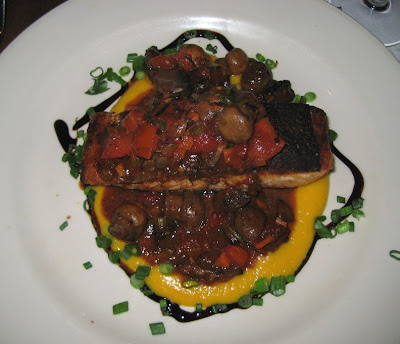 Although the mushroom and tomato ragu and the butternut squash purée may have seemed too hearty a match for fish, the bit of orange both lightened and heightened the squash and made for a harmonious link between all of the elements.

Mr Minx went for the Sicilian meatloaf which came with mashed potatoes and sautéed kale. The meatloaf had a heartier/denser texture than I'm currently used to, with an interesting blend of spices, including cinnamon. The kale was nicely cooked - not leathery, but not a pile of mush, either. It was nice to see that vegetables were not merely an afterthought as they seem to be in so many dining establishments. 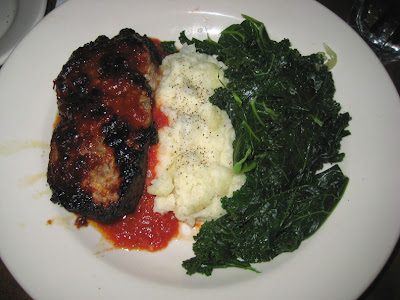 For dessert we had the house cheesecake, a low-rise NY-style dense affair, served with sliced strawberries and an ornamental blob of whipped cream. I prefer lighter cheesecake, but this was pretty good.

Dinner was definitely worth the price, and with two glasses of wine and tax it cost about as much as the regular Restaurant Week fee without drinks. But even better than the price was the opportunity to eavesdrop on the conversation of the women at the next table. I could really only hear the woman on Mr Minx's side, a rather portly gal with an air of pretension. I can be pretty pretentious myself, but at least I pronounce things properly. Among the gems that came out of her mouth were "keeona" (quinoa) and "pure-ee" (purée). And when our efficient waitress asked them how their entrées were, she responded, "delly-oso!"

Overall, a pretty good meal from what we should be considering a neighborhood joint. We really should eat at Donna's more often.

I was surfing on stumbleupon and this review came up, and it's really cool, I think you'd enjoy it. El Bulli is apparently the #1 restaurant in the world.

b_v - I follow the Amateur Gourmet regularly and was pretty jealous of his trip to El Bulli. I think the closest I'll ever get to Spain is if I eat at one of Jose Andres restaurants in DC. :)