Create the Next Vitaminwater® Flavor

vitaminwater® re-writes the hydration bill of rights
new variety to be created by the people, for the people via Facebook
whitestone, ny (september 8th, 2009) –– have you ever dreamt of being a scientist? a gourmet chef? an über-cool graphic designer or world famous comedian? well, vitaminwater is giving its Facebook fans a chance to be all those things for their favorite brand with its new “flavor creator lab.” starting on september 8, 2009 vitaminwater fans have the opportunity to develop the next variety designed by the fans, for the fans, which will be available in stores nationwide in march 2010. 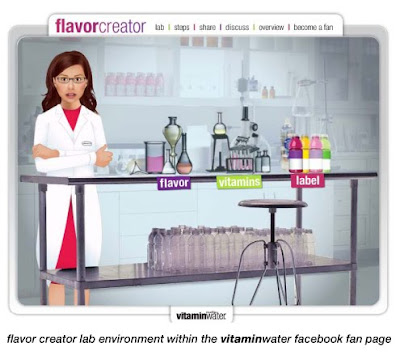 “this program is all about listening to our consumers,” said rohan oza, chief marketing officer of glacéau (makers of vitaminwater®, smartwater® and vitaminwater10™). “what better way to give vitaminwater fans what they want than to allow them the chance to create their own variety -- flavor, function and actual design of the bottle? we’re excited to take crowd-sourcing to a whole new level.”

the vitaminwater scientists spend months, sometimes years, expertly developing a new variety of the nutrient-packed, electrolyte-enhanced beverage. however, vitaminwater fans will formulate their variety in just a matter of months. the flavor generator process will be condensed into three simple steps: 1) flavor, 2) functional benefit, and, of course, everyone’s favorite, 3) the label design.

in step one, vitaminwater fans can help choose america’s most wanted flavor by logging onto vitaminwater’s Facebook page at www.facebook.com/vitaminwater starting september 8 and voting for their favorite flavor or flavor combination. vitaminwater has created a flavor buzz meter that scours flavor conversations on top blogs and web sites and then ranks flavors based on information gathered from current chatter.

in step two, participants will play a series of games and answer quiz questions to help vitaminwater assess what functional benefit america really needs. from this data, vitaminwater scientists will derive a special formula of vitamins and nutrients that meets the needs of the dehydrated masses.

for the final step, which is sure to be a crowd-pleaser with the creative types, consumers can participate in a contest where they get the chance to name the new variety, design the label and write copy for the bottle. whether it is a life story about summer camp or a steamy tale about a love triangle involving a kiwi, a strawberry and a banana, entrants will help develop the new variety’s name, personality and look.

vitaminwater partners carrie underwood (who is well aware of america’s fascination with voting for their favorites) and 50 cent (the first to co-create his own variety – formula 50) will help decide the winning label design once the field is narrowed to the top ten. the prize: $5,000 and the satisfaction of having represented the country in its freedom of vitaminwater expression.

“i was one of the first, outside of those science types in the vitaminwater laboratory, who had the opportunity to co-create my own vitaminwater variety,” explained rapper/actor/all-around-mogul 50 cent. “seeing thirsty people around the country drinking something you created is like watching people get down to your newest multi-platinum album, which trust me, i know a lot about.” 50 will be sharing his experience and expertise in making a vitaminwater variety throughout the Facebook flavor generator process.

america’s newest vitaminwater variety, created by the fans, for the fans will be announced in december and available nationwide at vitaminwater retailers in march 2010 for a suggested retail price of $1.49.

it all started when one thirsty man named darius wanted better water but couldn't find any worth drinking -- so he decided to make his own. word got around, thus emerged glacéau, a fresh new approach to bottled water. today, glacéau is a leader in the bottled water industry and the pioneer of the enhanced water category -- maker of vitaminwater®, #1 bottled water in the united states, smartwater®, #1 premium bottled water in the united states, and vitaminwater10, the perfect low-calorie combination. glacéau is all about helping thirsty people like you responsibly hydrate with something truly good for your body. for more information visit www.glaceau.com.
Posted by theminx