The last tapas feast I prepared was so successful, I decided to do it again, this time in honor of my brother's birthday. Once again I made the potatoes with chorizo (this time using the proper Spanish chorizo) and the marinated mushrooms: 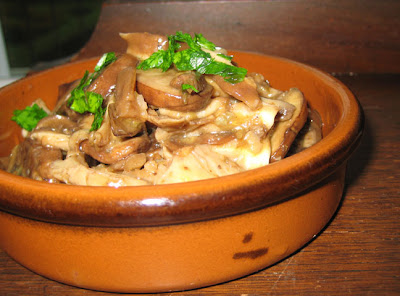 I also made a orange and red onion salad (top left), a simple endive salad with chopped scallion and a fig vinaigrette (top right), 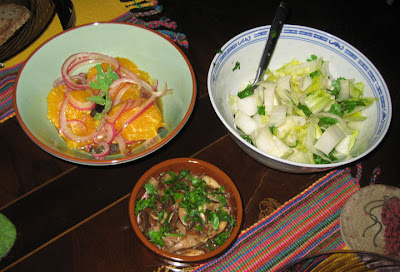 a tomato and avocado salad (top left) and some roasted purple potatoes (top far right). Then I got ambitious and baked up some empanadas... 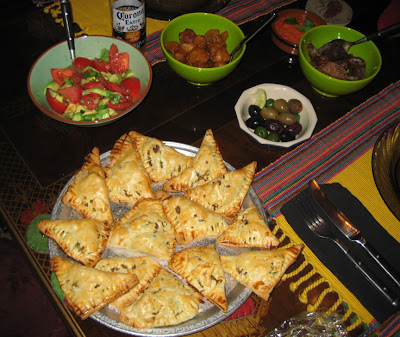 ...and made romesco sauce.

Ordinarily, romesco is made with vegetables roasted in olive oil and bread fried in olive oil. At least by José Andrés' recipe. But I put together a batch that was as easy as tossing stuff in a blender by using pre-roasted veg. It tastes amazing, so I can't imagine my changes violated the spirit of the sauce in any way. 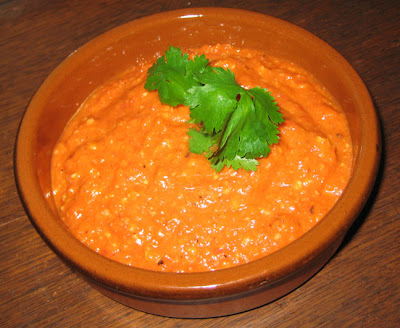 Sauté the onion in a bit of olive oil until lightly browned. Place in blender with next seven ingredients and purée, drizzling in olive oil until a thick sauce is formed. Add salt to taste.

As for protein, we had boneless leg of lamb, pork tenderloin, and shrimp skewers, all marinated overnight in some variation of soy, Worcestershire, vinegar, garlic, and mirin. Mr Minx cooked them over charcoal and wood chips and the results were pretty fine - tender, juicy, smoky, and garlicky. Can't beat that combination. 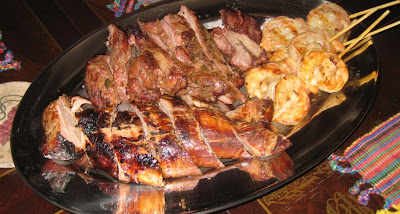 Oh, so you want the empanada recipe as well? Hmmm...well, I just tossed stuff together to make a kind of picadillo. I used a pound of ground pork, chopped onions, chopped dried apple (in place of the usual raisins), chopped green and black olives, and garlic, seasoned with pimenton, cinnamon, and S&P. For the crust, I used Wegman's house brand all-ready pie crusts (I tend to avoid Pillsbury brand anything because it all has a very distinctive Pillsbury flavor. Generic doesn't seem to have that problem.) which I cut into squares and filled with the picadillo and some chopped scallions, brushed with an egg wash, and baked for about 25 minutes at 350F until nice and golden brown.

They were a huge hit and were just as delicious eaten cold on the train on the way to New York a few days later. 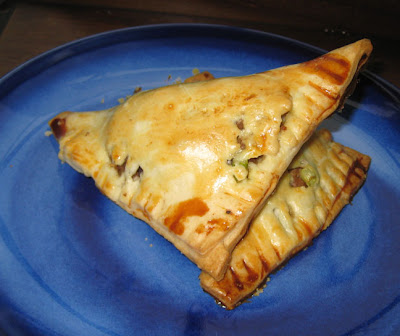 Although this was quite a bit of work, I spread it out over three days so it wasn't so intense. And it was worth it to see my family gobble everything up and ask for doggie bags of empanadas and chocolate chip cookies (which we baked instead of a cake). I'd do it again in a heartbeat.
Posted by theminx