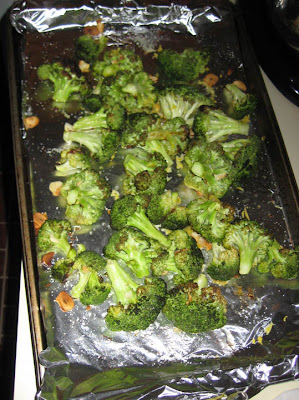 We had a big bunch of broccoli in the fridge and while contemplating what to do with it, I remembered reading a post about "the best broccoli of your life" on the Amateur Gourmet. In it, Adam waxes rhapsodic about a recipe from Ina Garten's cookbook, Back to Basics, involving lemon and Parmesan and a trip through the oven.

"I can't imagine it will be the 'best' broccoli of my life," I thought to myself. After all, not much beats perfectly steamed broccoli topped with butter. Except maybe gai lan (Chinese broccoli) with oyster sauce. But then I thought, "what the hell? I'll try it."

So I cut up the broccoli and tossed it with olive oil, salt, and pepper. Mr Minx sliced up a few cloves of garlic for me (so the smell won't taint my hands which have a bit of knitting to accomplish in the next few months. Nothing worse than a garlic-scented baby blanket.) and in the oven it went.

After a few minutes, the smell of the garlic permeated the house with its...garlicness. Twenty-five minutes later, I pulled it from the oven, seasoned it with more olive oil, grated on the zest of one lemon, added the juice of half, and a handful of Parmesan. And we ate it.

It was good - the lemon/garlic/cheese combo made the dish. But was it the best I've ever had? Nope. It was too crunchy for my taste, and made for some indigestion later on. I don't think adding the basil and pine nuts that the original recipe calls for would have improved it any. I did think it would be a nice treatment for cauliflower, minus the lemon and plus the pine nuts. And maybe Brussels sprouts, too. And asparagus.

Will I try it again? Maybe - it was easy enough. Or I might just steam my broccoli and add butter. Mmmm.
Posted by theminx

Try it this way next time you are grilling outside....
take a big sheet of foil and coat it with olive oil.
Rinse your brocolli florets and dump them on one end the foil.
Add your garlic cloves, and I LOVE to add a handful of green olive slices. Salt and pepper to taste.
Fold the foil over and roll up the 3 sides to seal the packet.
Throw it on the grill before you start your meat, and flip it over when you flip the meat.
THIS is the best damn brocolli you ever laid a lip on! And, it's easy to adjust the cooking time to get the "tooth" you like best!