Dunkin' Donuts has pulled the latest commercial featuring Rachael Ray. Apparently some right-wing nutjobs (begging your pardon if that includes any of my loyal readers) thought her scarf looked too much like a keffiyeh, a traditional headdress worn by Arab men and famously by Yasser Arafat.

The statement issued by Dunkin' Donuts:

"In a recent online ad, Rachael Ray is wearing a black-and-white silk scarf with a paisley design. It was selected by her stylist for the advertising shoot. Absolutely no symbolism was intended. However, given the possibility of misperception, we are no longer using the commercial." 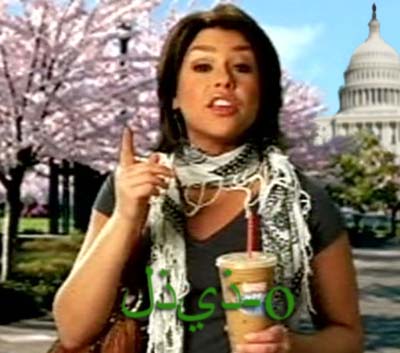 I can't imagine why anyone would think ill of Ms. Ray.
Posted by theminx

I saw this story on the "news" this morning . . . absolutely freaking ridiculous.

Also, I'm glad we don't even have Dunkin Donuts here in Dallas, because then I would possibly have to not buy coffee there since Rachel Ray is shilling for them.

There are enough things to irritate us about Rachael Ray. This is just silly. But seriously, I never thought people on the right-wing would come off as "PC" - which is exactly what the wingnuts are doing here.

You choose to shill with terrorist chic, you take your chances. It could have been worse, she could have worn a Che shirt. Viva la Mass Murderer!