The clock shows 5:45 AM as Tom Colicchio breaks into the Top Chef house and rudely awakens the cheftestants. 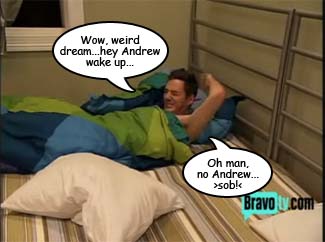 As the sleepy chefs rouse themselves, he reveals that today's Quickfire Challenge will involve egg cookery as a short order chef in one of Chicago's busiest breakfast spots, Lou Mitchell's.

Unwashed and still reeking of last episode's asshattery, the chefs drag their stinking carcasses to the crowded restaurant where they are given a quick tour of the egg station, otherwise known as "the hole - where the action is," according to Helene, the owner. 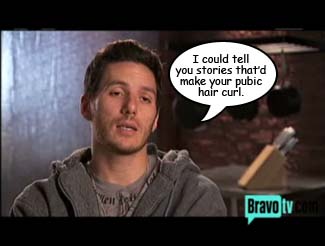 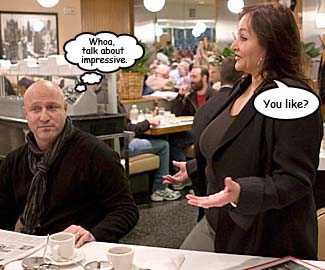 The chefs are put to task individually. Antonia and Dale are both impressive, but Antonia is given the win and an advantage in the Elimination Challenge. Tom then hands the chefs a piece of paper bearing the address where they would be meeting Padma and bids them adieu for the episode. He's apparently got better things to do with his time.

After an opportunity to clean up, the chefs meet Padma in an empty warehouselike space with hardwood floors. 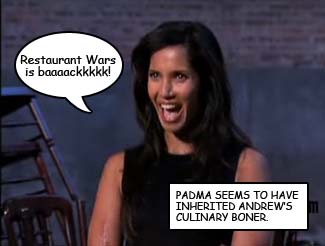 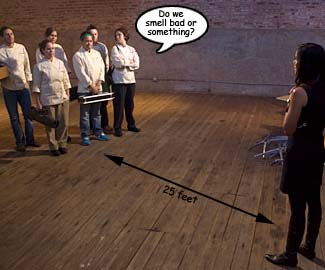 Antonia's advantage from winning the Quickfire is that she gets to pick her team. She's no dummy - she picks Stephanie and Richard to create Team Can't Lose! Part Deux. That means Lisa, Spike, and Dale (who all get along sooo well) are Team Loser. A Wedding Wars rematch! Even before the challenge begins, the end result is apparent. 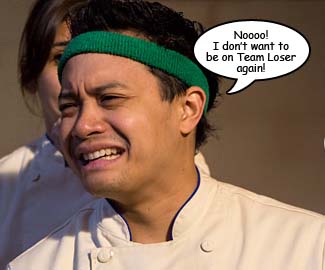 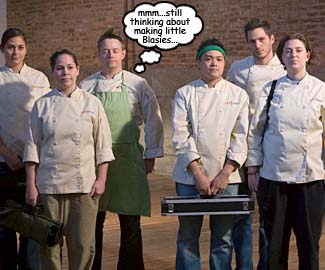 For this challenge, each team gets $1500 to spend on food (and that means everything they'll need since there's no Top Chef Pantry handy) and $5000 to spend on decor at Pier One.

Team Can't Lose! Part Deux decides to present a gastropub called Warehouse Kitchen. Stephanie takes front of the house duties, Antonia is executive chef, and Richard her humble grunt. On the Team Loser side, as all three chefs specialize in Asian cuisines, they opt to call their restaurant Mai Buddha. (After Spike's employer Mai House and Dale's employer Buddakan. Original, no? No. But Drew Nieporent and Stephen Starr sure appreciate the shout-out.) Spike takes front of house and Dale and Lisa flip a coin to see who will be Executive Chef. Dale loses wins the toss so he's in charge. 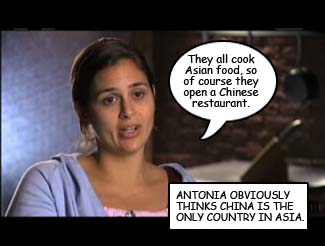 I know I'm probably in the minority, but I like Dale. He's a little high-strung, but he's passionate, and a smart cook. Maybe a bad choice for a leader though. And I flashed back on last season's Restaurant Wars challenge, and Tre, and I knew exactly what was going to happen this year. But lets get through the middle before we face the end, shall we?

We see the chefs shop -- first food, then decor. 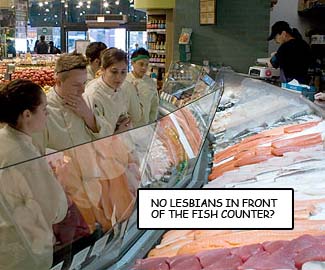 Team Loser buys just about every buddha statue Pier One has to offer. Good thing they didn't have to shop at Crate and Barrel, cuz they'd be shit out of luck on the buddha front.

Because Tom is off doing something else this episode, the Sniff 'n' Sneer is hosted by none other than Tony Bourdain, "bringing [his] warmer, sunnier disposition to this challenge." Warmer and sunnier than who? Tom? Satan? (I think Tony taught both of them everything they know.) 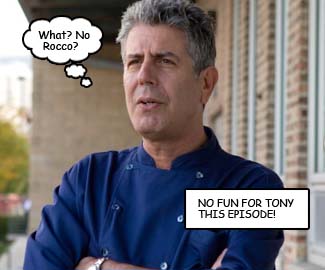 Restaurant Wars usually involves teams of four, so this year a few of the most recently eliminated chefs were brought back to serve as extra hands - Andrew, Mark, Jennifer, and Nikki.

Team Can't Lose! Part Deux chose Nikki because they were wrestling with homemade pasta and that's her forté (shaky though it may be). Team Loser wanted the strength of a Lesbian Alliance so they chose Jennifer. Plus they thought it would be a good idea to have a fauxhawk on their side, too. 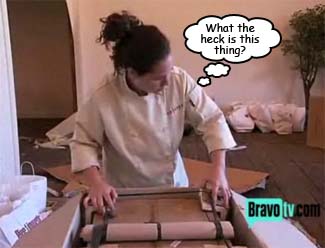 Stephanie not only decorates the restaurant, she also does more than her fair share in the kitchen, preparing the pasta dish (with Nikki's help) and creating a gorgonzola cheesecake dessert option. Spike prefers to spend most of his time decorating and dreaming of Andrew than being in the kitchen, but he does create a short rib dish, even if other people are actually doing the cooking for him. 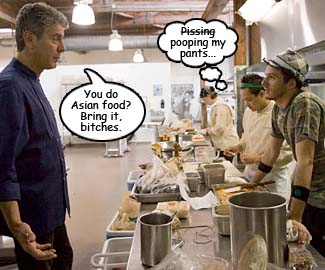 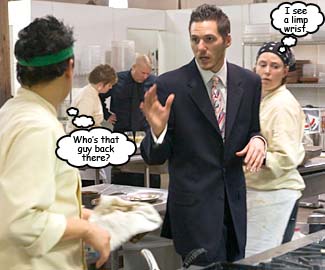 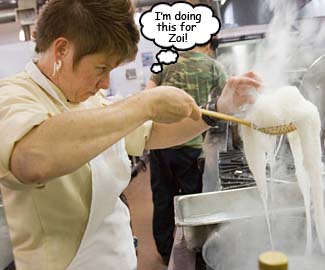 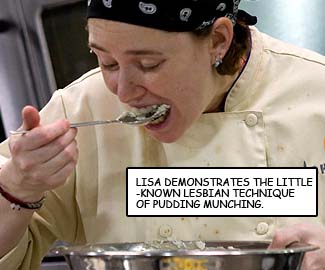 After a mere five hours, guests start to arrive and the restaurants must open for business. Judges Bourdain, Padma, and Ted Allen are joined by DC chef/ restaurateur José Andres to dine and critique the meals. Team Can't Lose! Part Deux does no wrong. Everything is delicious.

Team Loser, on the other hand, has problems. 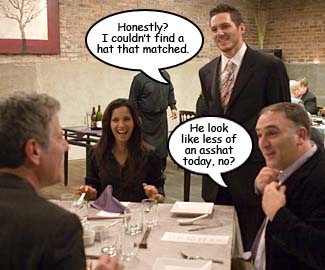 First Bourdain criticizes the purple and silver napkins as something that Prince might use. Ted disagreed and thought they were more like something Steven Tyler would hold during an Aerosmith concert. The food didn't fare any better. Bourdain's eaten a lot of Asian food in his travels, including laksa, and he didn't think much of Lisa's version. Padma did think the other appetizer course of pork and pickled plum dumplings were "slammin'." The butterscotch miso scallops were roundly panned. And the mango sticky rice dessert was called "baby vomit with wood chips" by Bourdain and "baby food garnished with potpourri" by a guest. Yum!

After dinner, we see the cheftestants back in the Glad Family of Products Commemorative Storage Room drinking brewskis and toasting each other. 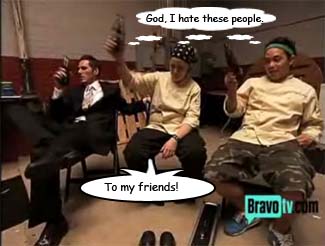 Padma comes in and requests the members of Team Can't Lose! Part Deux to come out to face Judges Table. Bourdain told them he was impressed by their comportment and performance. The food was praised too. And because Stephanie took on so much responsibility and handled everything so well, she was declared the winner. Her bonus prize was a trip for two to Barcelona including a guided wine tasting tour.

Team Loser was then brought out for their whipping. The Laksa was too smoky, Dale's scallops too sweet. The short ribs were deemed the best. There was lots of eye-rolling when Spike claimed them as his, but to his credit he did say that it was his recipe, but Lisa and Dale did the cooking. Otherwise, their lack of teamwork was disgusting. Because Tre Dale was the team leader and he couldn't hold it together, plus his bread pudding scallop dish was terrible, he got the axe.

And Spike and Lisa are allowed to survive another week. Life is just not fair. 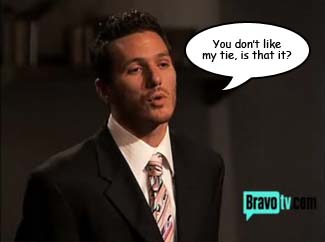 How do friggin' Spike and Lisa keep doing this?!?

I love that we BOTH gave Padma a "culinary boner" this week!

'... but I like Dale. He's a little high-strung, but he's passionate, and a smart cook. Maybe a bad choice for a leader though...'

He was very entertaining this year, no doubt. I just couldn't get past the boorish behavior. Speaking of which, I LOL'd at your requote of Bourdain's bringing his 'warmer, sunnier' disposition... bring on the "baby vomit with wood chips"!

* Well, they'd spent good money on those wood chips at Pier1 and by heck they were going to use them!

Still laughing over the pudding munching!