While I enjoyed school, I can't say I was the best student. There were times that I made excellent grades, but I think that's mostly because the classes were too easy. I breezed through reading and whatever passed for English class in a Catholic grade school, doing well enough to earn me a spot in honors English at Catholic High. There it got much tougher. When we started talking about the pluperfect tense and diagramming sentences, my brain turned to mush. And sorry, but I found literature to be a bit of a snooze. The Red Badge of Courage. The Old Man and the Sea. Heart of Darkness. The Scarlett Letter. No thanks. Huckleberry Finn and Jane Eyre? Barf. My grossly underdeveloped prefrontal cortex was not up for the job. (Vocabulary, however, I grokked.) Despite my lack of enthusiasm for the subject matter, I managed to absorb many of the complexities of grammar. Proof? My living room bookshelf bears three well-written books with my name on the cover.
After the publication of each of those books, I wanted to thank the teacher who for two years stood in front of the 19 young women in my English class, attempting to instill in us his passion for Shakespeare and proper sentence construction. However, I had no idea where he was or how to contact him--though at some point after graduation I did have his home address and we corresponded by good old-fashioned postal mail. (This was the 1980s, people. I am old.) Recently I found a mention of him on Facebook and realized we have a friend in common. She was happy to share his contact information, and I was pleasantly surprised to discover that he looked forward to hearing from me. And now he reads this blog. (Hi, Thom!)
When we met up a while back, I asked him if there was any particular subject he might like to see me cover on Minxeats, as I have been trying to post regularly again and am always up for suggestions. He said he went through the recipe directory and didn't see anything that specifically mentioned walnuts. While I do have a few walnut recipes here and there, most have been posted in the last few years, and I have not updated the directory in a very long time. I have linked some of those posts below. I also thought it might be nice to create a new recipe starring one of Thom's (and my) favorite nuts.
Recipes on Minxeats using walnuts as a featured ingredient:
Salad with Warm Sausage Vinaigrette, Walnuts, and Goat Cheese (You could use another nut, but walnuts work best for me.)
Nutty Bars (Again, you could use other nuts, but why would you?)
Maple Walnut Biscotti (It's in the name, so absolutely essential!)
Muhammara (This is a delicious red pepper and walnut spread of Syrian origin.)
Savory Granola (While I might not eat it with milk, it's a great topping/garnish.)
Koresht-e Fesenjan (My take on the Persian walnut and pomegranate stew, with lamb.)
And now the new recipe. This is for you, Thom. 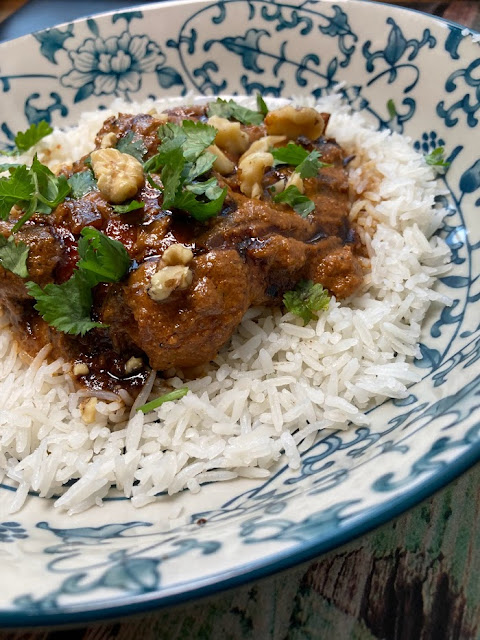 Chicken with Walnut Pepper Sauce
I find myself making muhammara frequently, and the chicken fesenjan is my favorite order at Villagio Cafe, a Persian restaurant in my neighborhood. I've already included separate recipes for both muhammara and fesenjan, but I wanted to create a new dish using them as inspiration--a chicken dish with a walnut sauce that also features roasted red bell pepper, plus the pomegranate molasses common to both.
Chicken thighs are one of my favorite proteins to cook. They cook relatively quickly, but can also be braised. They aren't as likely to dry out as chicken breasts <shudder>, and they have superior flavor. This recipe would work with both boneless and bone-in varieties, but would be best without skin. There's enough fatty richness in the walnuts. Besides, the skin would get soggy.
8 ounces (by weight) walnuts
Extra virgin olive oil
8 boneless skinless chicken thighs
Kosher salt
1 cup diced onion
1 teaspoon ground cumin
1 cup chicken stock
1 12-ounce jar roasted red bell peppers, drained and roughly chopped
1 large or two small 2 cloves garlic, roughly chopped
1 tablespoon or more fresh lemon juice
3 tablespoons or more pomegranate molasses*
1/2 teaspoon Aleppo pepper or Urfa Biber, or a pinch of cayenne
1/4 teaspoon smoked paprika
Fresh soft herbs (parsley, cilantro, mint, chives) for garnish
Put a large skillet over medium heat and add the walnuts. Stirring frequently, cook until walnuts are golden and fragrant, 3-4 minutes. (Keep an eye on them--nuts can scorch easily.) Remove nuts to a bowl and allow to cool.
Wipe out the pan and add a couple tablespoons of olive oil. Add the chicken, sprinkle with salt, and brown on both sides over medium-high heat. Remove chicken from the pan and set aside. Add a little more oil, if necessary, the onions, and another pinch of salt. Cook onions until soft and beginning to brown, 10 minutes or so, stirring frequently. Add the cumin and stir well, allowing the spices to toast for a minute. Pour in the stock and scrape up any browned bits stuck to the bottom of the pan. Add the chicken back to the pan and bring the mixture to a boil. Reduce heat and simmer gently, covered, for 30 minutes.
While the chicken is simmering, make the sauce. If you used walnut halves, put them in a ziptop bag and bash them with a heavy object like a meat tenderizer until they are in small pieces. (This makes them easier to blend. If you used walnut pieces, you can skip this step.) Remove a couple tablespoons of walnut pieces and set aside for a garnish. Place the remaining walnuts, bell peppers, and garlic in the bowl of a food processor with the lemon juice and molasses and blend to a paste. It's ok if it's not totally smooth, you just don't want it chunky. Add the hot pepper and smoked paprika and season to taste with salt. Here's where your taste buds come in! Imagine you're going to eat this stuff on a piece of pita. Is it bland? Add more salt. Still not right? Add a little more lemon juice or molasses. I like my muhammara a little sweet, so I add a little bit of maple syrup. When it tastes great, like you want to eat it with a spoon, scrape the sauce into a bowl and set aside.
After the chicken has simmered for half an hour, add the walnut red pepper paste and stir to blend the sauce with the liquid in the pan. Heat until warmed through, about 10 minutes. Taste. If the sauce needs more salt, add it. You could also add more cumin, lemon, pomegranate molasses, smoked paprika, pepper flakes, even garlic (use garlic powder at this point, as raw garlic won't have enough time to cook and lose its sharpness).
Serve over basmati rice. Garnish with some of the reserved walnuts, chopped or torn herbs, and a drizzle of pomegranate molasses, if using.
* Pomegranate molasses is a sweet-tart syrup made from the juice of fresh pomegranates. If you don't have pomegranate molasses, use equal parts balsamic vinegar and real maple syrup. Cranberry juice or grenadine--which is made with pomegranates--work, too, though the former can be quite tart and the latter is very sweet. As always, taste everything!

Any products in this post that are mentioned by name may have been provided to Minxeats by the manufacturer. However, all opinions belong to Minxeats. Amazon links earn me $! Please buy!