I'm thinking that I should have made this food gift guide part 1 and the appliances part 2, just so I could title this post Gift Guide Part 2: Electric Boogaloo. And if you don't get that reference, you're probably not as old and decrepit as we are.
Sigh.
Anyhoo...let us proceed, shall we?
I discovered a while back that a good gift for the person "who has everything" is food. We all need to eat. Some of us have dietary restrictions and need special products. Others of us are snackaholics. Still others are just weirdos. I'd give my Dad a half dozen jars of jams and preserves for Christmas because he was fond of eating them straight from the jar with a spoon. I enjoy receiving food gifts because once they're consumed, I can just recycle the jar or wrapper and there's nothing left to clutter the house--unlike books (which we have stacked in piles here and there), "collectibles" (ahem, Neal's action figure collection), mountains of craft supplies, and tchotchkes like candles, photo frames, and single-function kitchen gadgets like quesadilla makers (an actual thing that we actually received from an actual friend). Want to give me a gift that will make me smile? Send me a box of See's caramels.

Gifts for People Who Drink
I don't mean boozers, necessarily, but people who like to drink all sorts of drinks. But yes, booze, too.
ROOT 23 makes tasty simple syrups that can be used in cocktails, of course, but also poured on ice cream or in coffee or combined with a little seltzer to create a homemade soda. I'm partial to the Yuzu Citrus flavor, but Pear Rosemary is also nice.

Beetology, Wonder Melon, and Wonder Lemon are tasty juices that are certainly drinkable on their own, but also make fine cocktail mixers. The cucumber version of Wonder Melon also makes a tasty gazpacho when added to a blender full of cucumbers and roasted red bell peppers seasoned with sherry vinegar and salt. You can get packs of 9 bottles at Amazon, but if you just want to try one or two, I've seen them at Giant supermarkets.
Fancy fizzy water subscriptions might be a nice gift, too. I like Aura Bora.
And yes, fine, your favorite liquor emporium might offer up a ton of gifts for family members. I could use a bottle of Amaretto d'Amore, and would love anything from Eden Ciders. 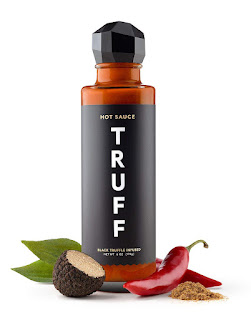 My friend Laurie gave me a bottle of TRUFF hot sauce a couple years ago. She's a fan of hot sauce in general, and a fan of this stuff in particular. I like hot stuff, too. Now, I'm going to say that the black label TRUFF isn't super hot. But if you like a gentle warmth, and the flavor of truffle oil, you might enjoy it. There is a red label version that is hotter, though I haven't tried that one.
This sauce is a littler thicker and sweeter than most hot sauces, so to me, it's like the best kind of ketchup. I like putting it on my scrambled eggs, and it's fantastic on french fries and burgers and anything else you might put ketchup on. Also, it's a perfect sauce for buffalo wings. Man, I'm drooling at the thought of that. (I haven't eaten dinner yet and I am hungry. Not the best time to write food blog posts.)
Don't discount Old Bay Hot Sauce, which might be inexpensive at ~$4 per bottle. The stuff flew off the shelves when it was introduced a couple years ago, and with good reason. It tastes like Old Bay, the beloved seafood seasoning of the Mid-Atlantic region.
Then there's the world of chili crisp/chili crunch, which I plan to cover in an upcoming post. One of my favorites is made by a newish brand called Oomame, which makes the increasingly popular, originally Chinese, condiment with flavors from other lands, like Morocco, India, and Mexico. China too, but Mexico's the best one. Dave Chang's Momofuku restaurant/tv/cookbook empire now includes food products like soy sauce and dry noodles, but they also have multiple versions of chili crunch, including extra hot and truffle.
Mighty Sesame produces various tahini-based products, including a spicy tahini that is no joke. It makes a mighty fine spicy hummus but can also add needed oomph to avocado toast.

Gifts for People Who Avoid Gluten 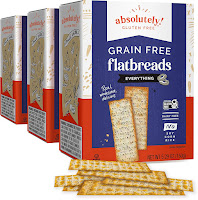 Absolutely! gluten free crackers and snacks are not only gluten free, but also grain free. But rather than using almond flour, Absolutely! uses potato and tapioca starches, so their crackers are light and crispy and low in calories. Their snacks include coconut macaroons, coconut chews, stacked potato crisps (think Pringles, but gluten free), and even cauliflower crust pizzas. We are a cheese-loving household, so I'm always thrilled to find yet another brand of tasty gf crackers to go with.
Tate's Bake Shop makes the best gluten-free chocolate chip cookies. Honestly, they taste pretty close to homemade toll house cookies, without the gluten. I love them, and even before I started avoiding gluten, I preferred Tate's gf version to other commercial cookies. They have a variety pack that is calling my name.
Another favorite gluten-free snack that also comes in non-gf flavors is Sheila G's Gluten Free Brownie Brittle. So yummy! The thin cracker-like cookies remind me of the crispy sides of a pan of homemade brownies. I've tried all the flavors, thanks to the annual Summer Fancy Food Show, and to be very honest, the gluten free ones are my absolute faves. I finished off a bag of the dark chocolate sea salt flavor as I was typing this post. ::::brushes away chocolate crumbs from mousepad::::
I also love the gf crackers from Hungry Bird Eats. 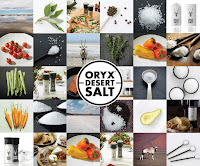 Oryx Desert Salt is an unrefined salt from the Kalahari Desert region that has no additives or non-caking agents. It's harvested from a 55-million-ton underground salt lake and has a clean salt flavor. The glass container with ceramic grinder is refillable 10 or more times, making it more environmentally friendly than the typical supermarket salt grinders. They have pepper, too, and both have become fixtures on our dining table.
I hope I don't have to remind you that Nuts.com has tons of fine snacky items and nuts. My favorite snack is the plaintain chips, and I'm partial to their gluten free brownie mix. Buy a basket, fill it with bags of nuts, and put a bow on it. 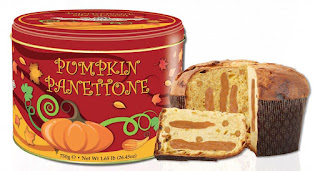 I've been buying this particular brand of Pumpkin Panettone as a birthday gift to myself for the last couple of years. It's super moist, and the pumpkin filling only adds to the moisture. It's become our traditional Thanksgiving day breakfast. Ordinarily, I make french toast with leftover panettone, but this has far too much filling for that sort of thing. It doesn't get stale fast, so it doesn't matter if it takes a week to finish.
Who wouldn't love a 2.2 lb jar of Nutella?
If you've never baked your own gingerbread house because you don't like gingerbread cookies, you may like making one with chocolate Oreos instead. This Oreo gingerbread house kit looks like it might be a lot of fun for the kiddos.
Also, I can't say enough good things about Yummy Bazaar, a mail order food company based in South Jersey. They have a wide variety of international foods all year 'round, but right now they are offering Italian and German holiday breads like Panettone and Stollen in many flavors. And they have all the flavors of Milka and Ritter Sport candy bars!
* Any products in this post that are mentioned by name may have been provided to Minxeats by the manufacturer. However, all opinions belong to Minxeats. Amazon links earn me $! Please buy!