I was in New York recently where I embarked on an eating expedition with my intrepid friend, the fabulous Daisy Bow. Together we ate a number of delicious things that I will write about later. Right now, I want to talk about a restaurant I visited on my own: Empellon, in midtown Manhattan.
Empellon is one of five Mexican-inspired restaurants by former pastry chef Alex Stupak. I dined at Stupak's 4th Street Taqueria in 2015, and had been pretty pleased with the food. In reading back over that post, I discovered that I had tasted one of today's dishes in the past. Was it as good as it was 7 years ago? Read on, friends, read on.
After eating mostly inexpensive comestibles over my last few trips to NY, I thought I might treat myself to something pricier. Several of the most memorable meals I've eaten in New York were at high end restaurants--Babbo in 2004, A Voce in 2012, The Bar Room at The Modern in 2011, and Le Bernardin in 2014. In each case, while the food was very good (excellent at times), the service was exceptional. And that was truly what made each meal magical. Rather than magical, my meal at Empellon was meh. 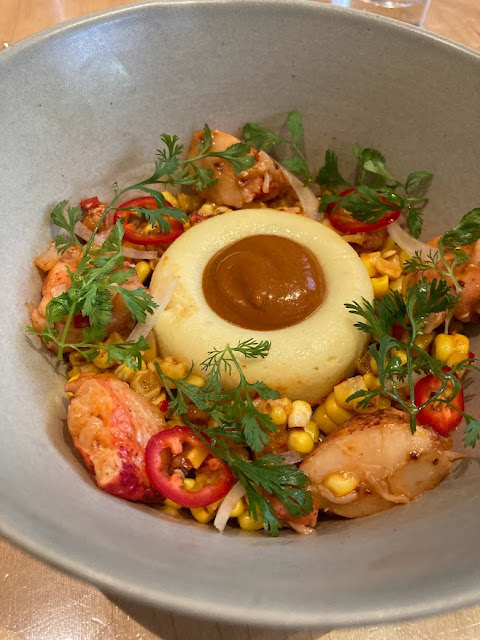 The $42 3-course prix fixe menu sounded good to me, and I started with the "lobster salad with chilled masa savarin." The salad incurred an upcharge of $4 but this was a splurge so I splurged. I'm not sure if there was a mistake on the menu, or if the kitchen doesn't know what a "savarin" is, but what I received was not a ring-shaped, booze-soaked, yeasted cake. It had more of a custard-like texture. Perhaps it was actually a sabayon, firmed up with gelatin (in which case it was no longer a sabayon)? Or a type of savory flan? In any case, it was ring-shaped, and it was flavored with masa. The center of the ring contained a spicy sauce of unknown origin. And around the mysterious custard-like object were corn kernels, slices of not particularly spicy capsicums, raw onion, and nuggets of lobster. On the whole, it was a tasty dish, though it was a tad overseasoned. 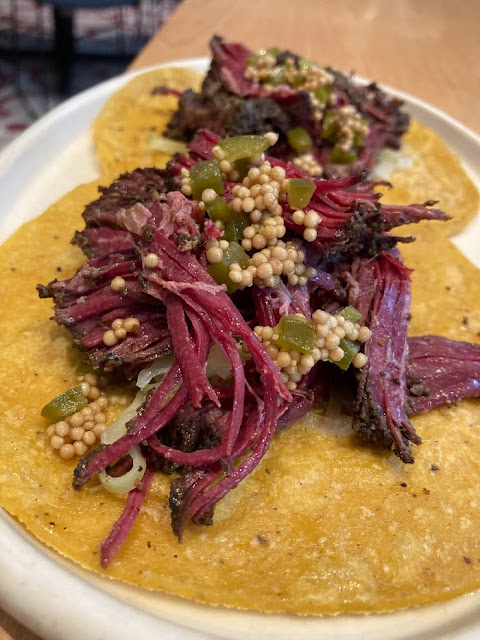 On the opposite end of the spectrum were the pastrami tacos with sauerkraut and mustard seed salsa. Back in 2015, I bartered one of my brussels sprout tacos for one of my husband's pastrami-filled ones and was delighted by the flavors. This time, not so much. The beef was tough and underseasoned, the sauerkraut was barely tangy, much less sour, and the mustard seed salsa provided nothing but texture. The meat in the second taco had a bit of fat, which made it more palatable, but the dish was pretty bland overall. Where was the peppercorn-and-coriander hit from the meat? Why was soggy cabbage considered sauerkraut? Why was this dish more sad than clever?
And here I must ding the service at Empellon. Generally, at a restaurant with these prices where food is not served family-style, I expect courses to arrive serially. However, I was about 2/3 of the way through my lobster salad when a runner appeared with my tacos. This put me in the position of having to decide between finishing my lobster dish before starting my tacos, as god intended, or to start on the tacos so they wouldn't get cold. But that might signal the wait staff to attempt to wrest my unfinished lobster away, which would earn them a literal slap on the wrist. Meanwhile, my waiter or captain or whatever one calls them these days (they do not serve, they merely take orders), was standing off to the side, gazing upon the dining room as might an overlord. Did he notice that my entree course was fired too soon? Did he care? I know he knew I wasn't dining on an expense account and may well have been...a tourist! (horrors!) but I think he could have been more solicitous. 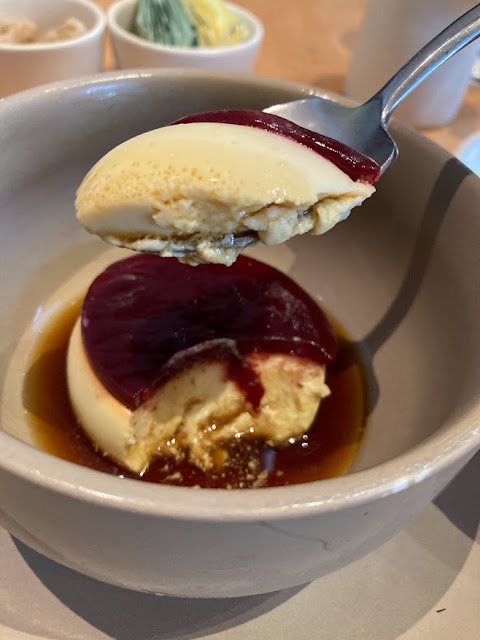 For dessert, which came at the proper time, I had the sour cherry flan with chicory caramel and a cup of decaf. The flan was fine. Not as good as my friend Melinda's flan, but then nobody's is. I enjoyed the sour cherry topping, but couldn't really pick out the chicory in the sauce. But it was fine.
When he presented the check, I noticed that Mon Capitaine did not charge me for the coffee. He nodded when I pointed out his omission, rather than thank me. Which would have been below his station.
Positives about the meal: the dining room was full of natural light and the seating was comfortable. The portion size was just right for someone not planning to eat again for the rest of the day (like me), but I imagine the 3-course lunch might be a bit much for someone going back to the office. The lobster was perfectly cooked, the tortillas were sturdy and didn't disintegrate under the weight of the generous portion of meat, and the cherry flavor of the flan was quite nice. But still--a solid meh.
It's less-than-perfect meals like these, however, that really allow me to appreciate an exemplary one. Or even just a good one.
Empellon
510 Madison Avenue,
New York, NY 10022
(212) 380-1215

* Any products in this post that are mentioned by name may have been provided to Minxeats by the manufacturer. However, all opinions belong to Minxeats. Amazon links earn me $! Please buy!
Posted on Minxeats.com.
Posted by theminx