Woo...it's the week we've all been waiting for!

But let's start with Week Eight. How has that been for all of you? Have you retained your sanity? Are you working or not? How much eating and drinking are you doing during our enforced staycation? I'm spending a lot of money on takeout and delivery and booze, but I'm also cooking. Not a lot. I can't work a grueling tough boring 8 hours and then be expected to put a hot and delicious meal on the table. And it has to be delicious. I have never been and never will be a person who relies on a lot of convenience foods (not counting canned goods like beans, tomatoes, clams, tuna). Things you won't find in my pantry: instant ramen; mac and cheese in a box; Ragu; hamburger "helper." Hey, if you can't or won't cook, I guess you eat that stuff. But I can't deal with the salt content. Also, I have pretty mad cooking skillz and prefer to do things from scratch. The coming weekend's meals will include Mr Minx's amazing meatloaf which I plan to supplement with a side of caramelized cabbage, and homemade 4-cheese mac and cheese (we have so much cheese!) though I haven't decided if it will be the stovetop type or the baked kind (leaning toward the latter). What you will find in my pantry: 6 kinds of fancy French mustard; various gluten-free baking products (thanks to a partnership with Bob's Red Mill); nuts and seeds; tons of chocolate and booze. Reading that sentence over again I realize those ingredients would make one hell of a Chopped basket. "Your basket contains tarragon dijon, gluten free brownie mix, chia seeds, and Lyon Rock N Rum!"

Now on to the tasks at hand: using more colons and semi-colons; writing about Restaurant Wars!

Normally, the team leaders and restaurant concepts are decided in a Quickfire; this season that work was completed in a prior episode. Last week we saw that Kevin and Gregory won with their concepts. This week they put them in action. But first: choosing teams.

Stephanie Izard is still hanging around. She's so tiny, she barely comes up to Padma's shoulder. She claims she has to see how this thing ends.

Kevin and Gregory draw knives to see who gets first choice of their hopefully champion dodge ball team. It's Kevin, who smartly chooses Bryan (he'd be my first pick, too). He tells us that they were in season 6 together and promised to support each other into the finale this season. Gregory looks over the remaining chefs and chooses....Malarkey. Padma is surprised. 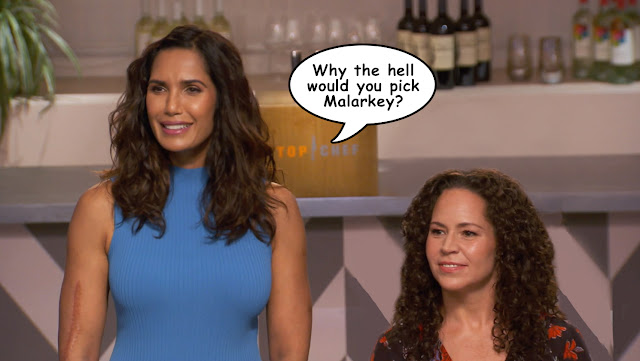 I think everyone at home did, too. Melissa was the clear choice here, and Kevin snatches her in the next round. Gregory then takes Lee Anne, Kevin picks Karen, and Gregory is left with Stephanie. 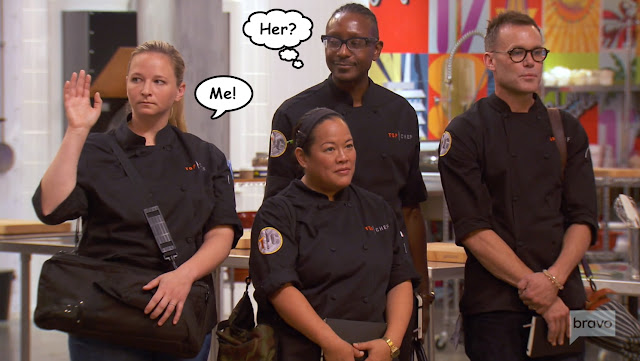 Padma then asks which contestants had been on Restaurant Wars-winning teams in the past; I was surprised to see Stephanie raise her hand. I had thought that her only time on Top Chef was during the ridiculous two-week time-wasting "qualifying" round before Top Chef Season 10 Seattle started in earnest. However, she had also appeared in Season 11, coming in 7th place. Mea culpa. We stopped watching after Season 10.

The teams are told that the winners will get 40K, which is exciting. They first need to plan their menu and design their spaces, which is also exciting. Ingredients are to be procured at Food 4 Less and 7-11, and the decor from Target and Bob's Discount Furniture. Not so exciting. They drive to their respected spaces, matching empty concrete bunkers in DTLA, to plan. Exciting?

Malarkey and Karen volunteer to be front-of-the-house. It's a thankless job, and I don't know why anyone would volunteer to do it for Restaurant Wars. Not only are they responsible for cooking something, but they also have to coordinate the assembly of the restaurant and train the waitstaff. And they have to deal with guests, which of course is the worst thing, because people are hell.

Most of the episode is boring. There's a tiny bit of drama at Target after Malarkey picks out the same melamine plates as Kevin. Kevin gets bleeped and Malarkey apologizes but doesn't mean it.

Gregory decides against making the same oxtail dish as last week, though he keeps a whole fish on the menu. Kevin plans on country captain as his main again, but with approximately 478 side dishes, the thought of which make his crew roll their eyes. Cuz of course they'll be making them. 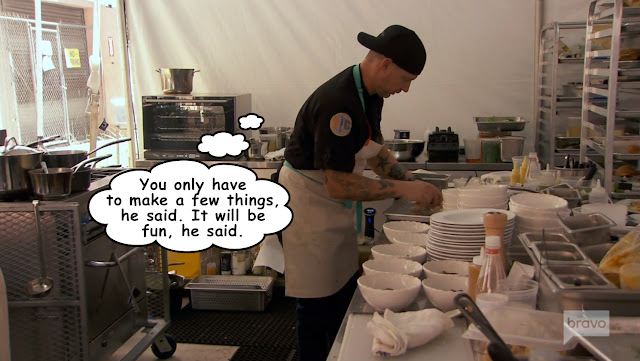 Both Malarkey and Karen had a real chore setting up the restaurant. We see Malarkey screwing legs onto tables, etc. It's a good thing they didn't have to shop at Ikea. Karen got a late start with setting up her place. I can't imagine why. The two dishes she was preparing for the restaurant were pretty minor.

Speaking of dishes, what did they serve? 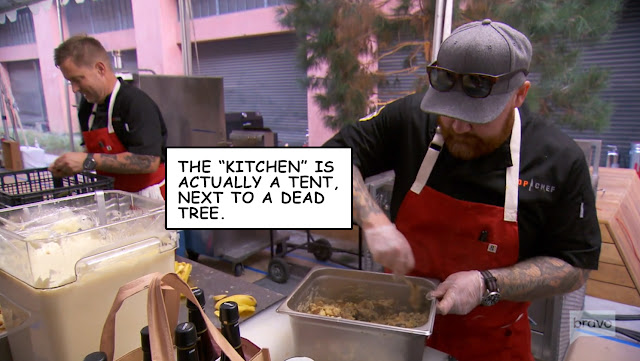 Honestly, I don't think they get enough time to get their shit together to produce a really stellar meal and design a restaurant experience on top of it. But nobody wants my opinion. After a quick 2 hours of cooking on day 2, the restaurants are open and guests flood in. There are to be 100 of them in 4 hours. Kann's first seating seems to go well, Malarkey appears to be nervous but keeps things moving. There's a bit of squabbling in the kitchen between expediter Lee Anne and the waitstaff, but eventually food does get served. The Country Captain, on the other hand looks like a total meltdown. There are just too many dishes to prepare, and except for the canapes and dessert, everything needs to go out at the same time. There's confusion as to which table already had canapes and who was next. There's a crowd forming out front for the second seating. Karen claims that the first seating just isn't leaving, but it's likely because it took so long for food to come out in the first place. 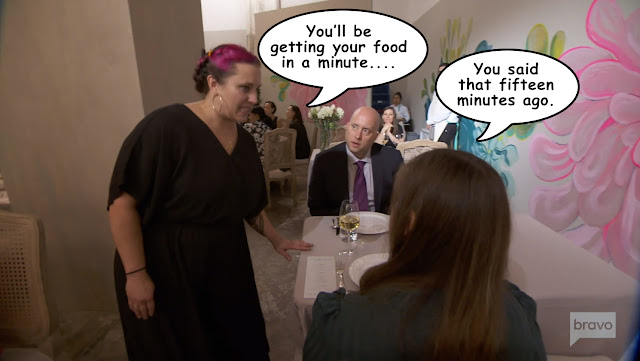 The judges eat at Kann first and leave pretty happy, despite an initial waiting period for food. There's no oxtail, but everything else is delicious. Then they go next door and notice the people milling about. Luckily, they seem to get a table right away. Maybe not luckily, they get to eat soon too. Not all of the food is delicious. The Country Captain is clearly different from the previous version, and not as good. Bryan's shrimp and grits is substantial enough to serve as a second entree rather than as an accompaniment. Karen's mushrooms suck. And Gail takes umbrage with the texture of the bananas in Kevin's dessert. The judges also notice that Kevin doesn't bother to come out to say hi, though Gregory had.

Judges Table: They waste no time in declaring Kann the winner. Not only do the cheftestants win 40K, but each of them gets a year subscription to OpenTable services for their restaurants.

The judges opine that The Country Captain served too many dishes. The mushrooms sucked. The canapes all had the same texture. Dessert seemed too dry. They want to know why Kevin shouldn't be sent home right then, and he throws himself on the sword. He takes blame for all of his restaurant's issues and Padma tells him to pack his knives. 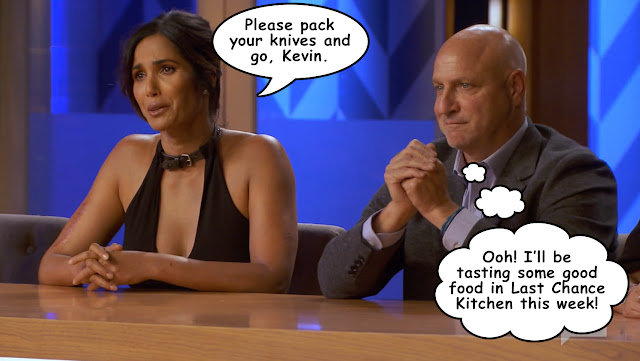 Kevin next gets to compete against Nini in Last Chance Kitchen while hunky Eric perches on a stool and watches. He'll probably be back. Kevin that is, sadly not Eric.

Next time: dunno. The preview was confusing. Couldn't tell if it was for the next episode, or for the next several. Also, the finale will be filmed in Europe. Bryan says he already has his plane ticket. Hope he has one for me! No wait...we're still stuck at home for the foreseeable future....