Happy Friday, readers! How are you all doing? It's sunny and warm in Baltimore today, quite the change from the overnight lows in the 30s earlier in the week. I've been eating too many carbs recently and feel like a dead cow floating down the Ganges. I'm trying to break a diet plateau, and I hope my month of near-excess does the trick. I'm sure you will see me complain here if it doesn't. (Hopefully that will not put you off coming back to read future recaps!)

This week's episode of Top Chef has a wee bit of Girl Power in it. No, none of the Spice Girls make appearances. No celebrities at all, actually. Instead, we get season 16 winner Kelsey Barnard Clark playing the role of Quickfire guest judge. TBH, Kelsey was the chef I least wanted to win last season. Hunky Eric was my first choice, then Sara. I only watched the finale, but that was enough to make me root for the other cheftestants. No explanations. I'm just putting it out there because this is my blog and I can. Another Top Chef winner, Brooke Williamson, is the guest judge for the Elimination Challenge. Are they hinting at a female winner this season? (Melissa, methinks.) Not-So-Fun Fact: there have only been five female Top Chefs out of 16 seasons of the regular show, 2 of Just Desserts, 1 of Duels, and 5 of Masters.

The clock at the Top Chef Mansion shows that it's 5am and the cameras are already being intrusive. We see Gregory wiping sleep out of his eyes while he's still in bed, and Bryan disembarking from his top bunk, sadly fully clothed. The chefs sit down to breakfast and there are complaints about the coffee. Bryan apologizes, as it's his fault. He's apparently still mopey about his friend Kevin's departure after Restaurant Wars. Bryan suddenly gets up and walks toward the other side of the room and pretends to discover an envelope on a side table.

Director: "Ok, Bryan, go over to the little table by the fireplace and pick up the note."
Bryan: "What's my motivation? Why would I suddenly walk across the room?"
Director: "Um, maybe you need more coffee?"
Bryan: "But the coffee pot is in the other room. I should know--I made coffee this morning, and everyone hated it." [bursts into tears]

Maybe it didn't go down like that. Or maybe it did.

Right, the note. It was from me. "Meet me downstairs in 15. Bring your speedo. Don't tell the other chefs. xo"  I lie. It was actually from Padma, announcing that the cheftestants would be attending "summer camp." Why did I put "summer camp" in quotes? If you remember Malarkey's ranked list of chefs from Episode 5, you might recall that it was dated "9 24 19." Considering that each episode takes roughly two days, and hoping that the producers give the chefs a day off now and again, today's episode was filmed in the first days of October. Regardless (or irregardless, if you're not particularly bright), the general response to the thought of going to camp with Padma was, "um, no thanks." Malarkey prefers to cook indoors, in the city. Lee Anne is suffering from PTSD from her brief appearance on Top Chef Colorado (season 15) in which she had to hike in the snow and suffer altitude sickness. Despite not really wanting to go, the chefs have no choice. They pack warm clothes, load into two of their sponsorship mobiles, and hit the road. 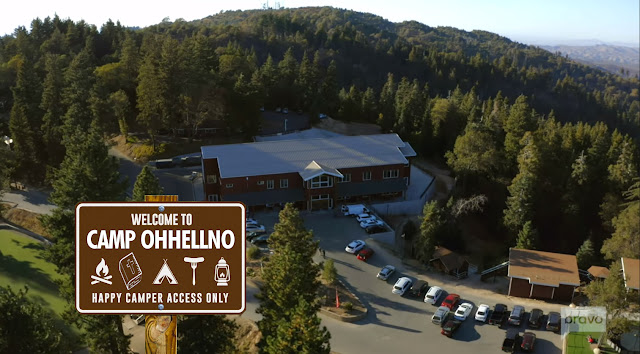 According to Google Maps, their destination is about 90 miles east of Los Angeles, or three days of driving in LA traffic + an hour once they leave the city. Once they arrive, they realize that something is very wrong. It's no ordinary "summer camp!" It's a special Vacation Bible Camp! But before the cheftestants get to have some good clean fun, they have to pass the Quickfire Challenge. Each chef needs to create a grilled dish with show sponsor Bush's canned beans. To make the challenge even more fragrant, the winner will receive $10K and a lifetime supply of Beano. I don't know about you, but I find grilling beans to be exceptionally difficult. They keep falling through the grates....

The chefs use all the varieties of Bush's beans, from seasoned baked to plain varieties. Most choose to do things that are bean-forward, but not our Bryan. He is his own worst enemy this season. Rather than cook a meal that fits the challenge, he tends to cook something that fits with his particular fiddly, tweezer-needing, style of cuisine. His dishes are always amazing, because he is an amazing chef. Also cute. But his good looks aren't enough to make the judges forget that he has never quite seemed to fulfill the challenge. At least not the Quickfire. So it goes this time, as Bryan's bean-juice-marinated meat is on the bottom with Stephanie's weird veggie burger and Melissa's under-filled fried pies. The top toques are Karen, Gregory, and Lee Anne, who laments that she has never won a Quickfire. Until now, that is, with her bean empanada. She plans put the 10K prize toward her wedding expenses, mostly catering.

Padma then tells the cheftestants that they are not the only guests at the camp! There is also a gang of  mommies from all over the country there to drink copious amounts of wine and bitch about their husbands. GIRL POWER! And also Jesus. And because these wenches need sustenance to go with their booze and bitterness, they will be provided brunch. And Bibles. The lucky cheftestants will be providing said brunch; each of them will be responsible for 2 items, each feeding 200 mouths.

But first, the chefs get to play. I mean, prepare their souls for everlasting life and denounce the evils of the world.

After changing into camp-branded apparel, the cheftestants are first made to sit through a lecture on the sinfulness of tattoos, homosexuality, eating shellfish, and worst of all, wearing garments made from a cotton/poly blend. Like chef's coats. They are then made to zipline over a local wildfire to show them just how hot Hell can be. 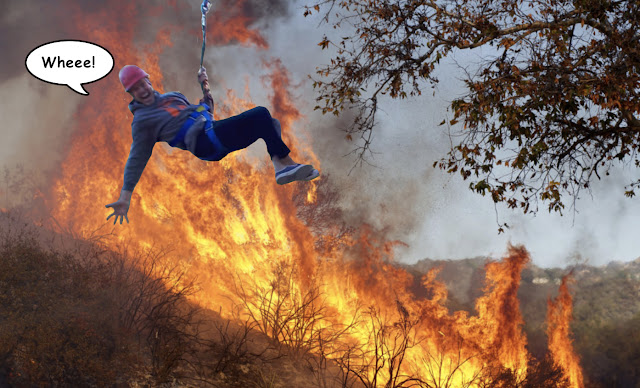 Afterward, they grill Field Roast plant-based sausages for supper--because pork is evil--and go to bed, boys in one cabin, girls in another. Meanwhile, the mommies are singing Christian karaoke downstairs until 3am.

Just a couple hours later, the chefs pull out their earplugs and prepare for a morning of scrounging ingredients and cooking for the 200+ hungry mouths that at exactly 9am will descend on them like a plague of locusts. There is no Whole Foods near Camp Killmenow, so the cheftestants must use whatever ingredients happen to be in the larder. I imagined SPAM, Twinkies, Wonder Bread, Dinty Moore beef stew, pasteurized process cheese food slices wrapped in clingfilm, more canned beans, and myriad other things that the average camper eats in this great land of ours, and was pleasantly surprised to see that there were also fresh ingredients like spinach and eggs, too.

There's only 4 hours for the chefs to plan dishes, choose ingredients, and cook. Melissa says it's like "straight-up Hunger Games." Malarkey decides he's going to make "sharkshuky," though there's neither fish nor the letter R in that dish. A lack of tomato products makes him change course for something with shrimp, proving that the temptation of Evil is hard to resist. 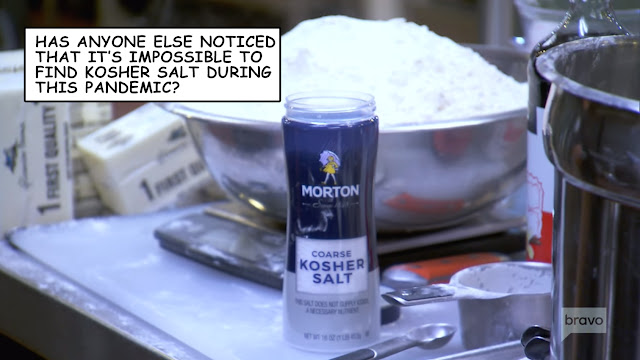 While the chefs are cooking, Tom comes in for his Sniff N Sneer with Brooke Williamson. She's had some sort of work done. Her hair is definitely highlighted, but maybe also face and/or lip fillers? I can't understand why attractive people do that to themselves. Before long, they slide down that slippery slope into Real Housewives territory. It's probably not a coincidence that both shows are on Bravo. 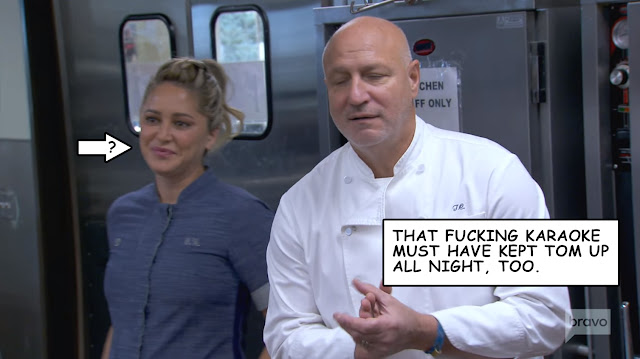 Someone should revamp Leviticus to mention Polymethyl methacrylate and silicone.

Shortly, the Karens mommies flood into the dining hall and start fighting over bottles of champagne. They all need a little hair of the dog to help combat the wine they drank while caterwauling to Amy Grant and MercyMe. (Don't judge. Jesus drank wine.) The chefs are waiting for them, set up like lunch ladies beyond the buffet, ready to serve and explain their dishes. The judges get in line with the rest of the crowd. There is some squealing when the mommies get to meet Lee Anne, and even more squealing when they spot Bryan there, too. Hands off, ladies! He's mine.

The highlights of the meal were Bryan's carrot salad and Karen's corn cake. Gregory had originally intended to put eggs in his dish of mushrooms and tomatoes, but realized that eggs for 200 would be impossible to pull off. The judges loved his swap of spinach. They also like Stephanie's "breakfast salad" and her biscuits. Everything else was crap. Well, not crap. Malarkey's steak was pretty ok, but his shrimp and chorizo soup was bland and the overcooked shrimp were sure to invoke the wrath of God Almighty. Melissa's romaine and grapefruit salad landed her on the bottom along with Malarkey, and neither of Lee Anne's dishes--an accidentally steamed berry clafoutis and dense donuts--were going to get her into Heaven.

I was feeling the girl power of this episode (also Jesus) until Bryan was declared the winner. I mean, yeah, he finally won a challenge this season, but it also threw the theme I was planning to use in my recap under the bus. Also, he has tattoos! To make matters worse, Lee Anne was the eliminated chef. Clearly her dishes weren't half as sinful as Malarkey's shrimp!

Next week: the remaining 6 cheftestants must create a 6 course progressive Kaiseki meal for Olympic athletes. Which would be great, if any of them knew anything about Japanese food....