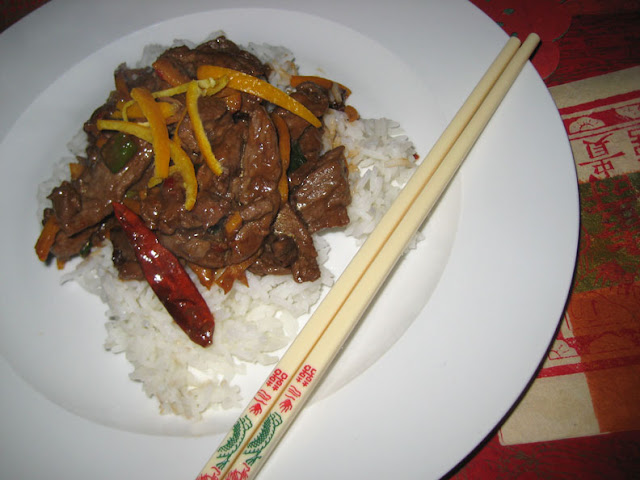 I wanted to whip up a little something festive and lucky to celebrate the Chinese Year of the Snake, but I didn't want to go to a whole lot of effort. Yes, I'm lazy, but also tired from planning and dealing with book signings and all that good stuff. Traditionally, Chinese New Year festivities involve labor-intensive dumplings or spring rolls, which symbolize luck and prosperity. That seemed like too much work for me, plus spring rolls need to be deep fried, and I have a long-standing fear of frying.

Then I found a recipe for tangerine beef that sounded entirely do-able, especially since we had everything on hand except the beef and the tangerine. Tangerines are considered a lucky fruit, as the word for tangerine sounds similar to the word for luck. Oranges, too, have a place at New Years feasts because "orange" and "gold" sound alike as well. And as luck would have it (heh) I stumbled upon this recipe for Tangerine Beef in a book already on my bookshelf, Feeding the Dragon, written by brother and sister team Nate and Mary Kate Tate.

The recipe calls for flank steak, which was hella expensive at the local Safeway, so we substituted a piece of London broil, instead. The dish was very different from what we normally think of as "orange beef," which usually has crisp meat and a sugar-laden sauce. Instead, the beef in this dish is tender, the sauce not sweet at all, and with the combination of chili bean sauce, dried chiles, and Sichuan peppercorns, full of ma-la, or the spicy and numbing sensation popular in Sichuan food.

In a large bowl, dissolve the cornstarch with the soy sauce and rice wine. Stir in the ginger and add the beef strips. Toss well, cover the bowl, and set aside to marinate for at least 20 minutes.

Stir together the sauce ingredients in a small bowl and set aside.

Heat 2 tablespoons of the vegetable oil in a wok or large saute pan over high heat. Add the beef and stir fry for about 1 minute, until browned but still a bit pink. Remove beef and any liquid from the wok and set aside.

Heat the remaining tablespoon of oil and when it's hot, add the Sichuan peppercorns, chiles, the reserved tangerine peel, and the white parts of the scallions. Stir fry for about 45 seconds, then add the sauce. Toss in the beef and the green parts of the scallions and stir until the onions start to wilt and all is covered with sauce.

Serve hot with plenty of steamed rice to ease the heat.