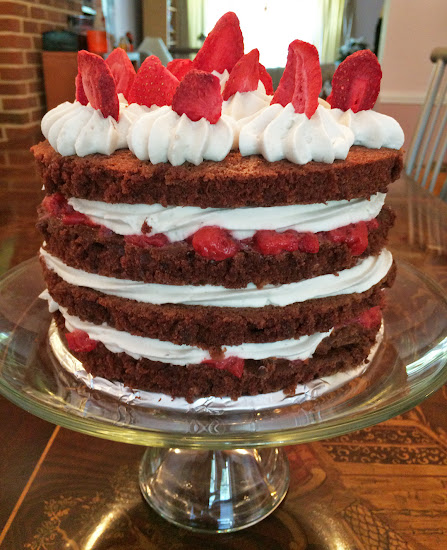 Sometimes I am too ambitious for my own good. I've never been much of a baker, excepting the occasional tray of brownies and cookies at Christmastime. There's also the annual cake for Mr Minx's birthday, but that's usually a simple chocolate bundt. This year, I wanted to do something fancier. I was desperate to make a "naked cake," a cake with exposed layers, popularized by Christina Tosi at NY's Milk Bar. I've seen a lot of them on Instagram, and they look so cool. Also, they didn't seem all that difficult to make. Frosting the sides of the cake always seemed like the most fidgety part, and making a cake naked eliminates that whole messy ordeal.

My idea was to use the same super moist recipe that I use for the bundt cake, with the addition of roasted strawberries, and a simple stabilized whipped cream frosting. It would be like a strawberry shortcake, only not short and with the added goodness of chocolate.

I didn't want to attempt to cut round cake layers in half horizontally, pretty sure that would be a disaster. Instead, I made several flat rectangular cakes in a jelly roll pan and cut them into rounds. That ended up looking a bit sloppy. Perhaps my knife wasn't sharp enough, or the cake recipe I used was too moist. In any case, the somewhat jagged layers got stacked between pieces of waxed paper and spent the night in a cake carrier until I was able to assemble it the next day. It would have been too much to try to get it all done on Saturday morning before our annual afternoon birthday crab feast guest arrived.

The roasted strawberry idea I got from a foodie newsletter. The recipe in the newsletter was actually for oven-dried berries, but I liked the idea of cooking strawberries in the oven until they got soft and gave up a lot of liquid. Some of that liquid became a subtle flavoring for the whipped cream frosting that I stabilized with gelatin so it would last longer and not weep all over the cake. 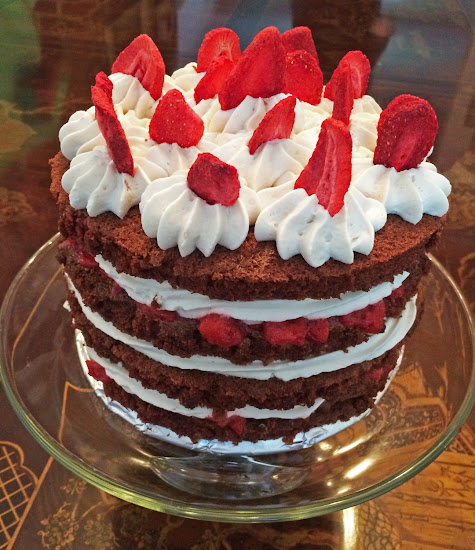 I had used up all the strawberries in the roasting process but wanted to top the cake with something besides whipped cream. Birthday candles were out of the question (as was singing "Happy Birthday"), but I remembered we had a bag of Crunchies freeze-dried strawberries that the company sent me to taste after the Fancy Food Show. I had been nibbling them on their own, but felt they would be the perfect garnish for this cake and a good counterpoint to the squishy roasted berries between the layers. They stood up like sweet stalagmites, adding height as well as color and flavor. They softened a bit as the cake stood, but they never sagged, and I kinda liked the third strawberry texture in the mix.

Crunchies are non-GMO, gluten-free, vegan, kosher, and halal and contain no added sugar or artificial flavors. They are just freeze-dried fruit, pure and simple. I also love the Crunchies mango snacks and am contemplating making a similar cake, with yellow cake and mango filling, so I can use them as a garnish, too. That is, if we don't just eat it all straight out of the bag. :) 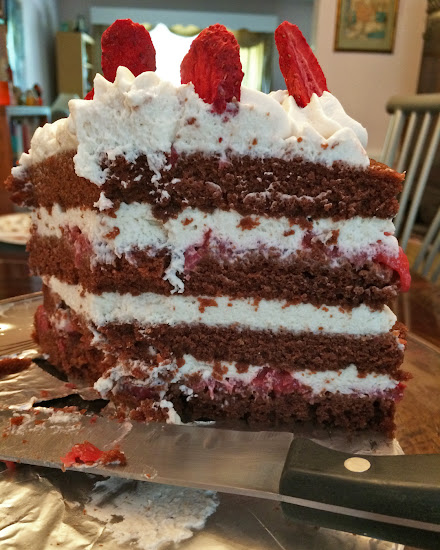 For someone who didn't really know what she was doing, I did a pretty decent job. Though the cake isn't the most beautiful thing in the world, it tasted so so good. ::::patting self on back:::::

To make the strawberries: Preheat the oven to 400°F.

Toss the strawberries with the sugar, then with the vanilla. (Don't put the vanilla on the sugar to cut corners; it will just make the sugar clump up and make it hard to toss with the strawberries. No, I did not learn that through experience.) Spread in one layer on a parchment-lined baking sheet. Roast for 25-30 minutes, until strawbs are soft and there's lots of yummy juice on the baking sheet. Allow to cool at room temperature before scraping into a covered container and refrigerating until completely cooled.

To make the cake: Preheat oven to 350°F. Place a layer of parchment in a jelly-roll pan and grease it lightly with butter.

Here's the tricky part. Depending on the size of your pan, ladle in enough batter to cover the parchment entirely and be no more than 1/2 inch deep. Bake for enough time that the cake springs back when you touch it. I used a 9" x 13" jelly roll pan, which made three cakes with the amount of batter specified, each baking from 13-15 minutes (the first cake took longer and the last cake took less time). An 12" x 17" pan or thereabouts would probably take 18-20 minutes, so start checking at the 16 or 17 minute mark. Just looking at it should tell you if the middle is wet or cooked through. Once your cake or cakes are baked, allow them to cool in the pan for a few minutes. Loosen the edge of the cake with a knife and turn out onto a rack to cool completely. You should peel off the parchment while the cake is still warm.

Once the cakes are cool you can cut them. If you want to make it really easy on yourself, cut each cake in half and make a square layer cake. (Next time, that's what I'm doing!) But if you want a round cake, use a 7" or 8" round template as a guide. Place each cooled cake on a cutting board large enough to hold them, or right on your counter or table if that's easiest. Using the template and a sharp knife, cut your circles. Lift them away with a large spatula and put them on parchment or waxed paper until you're finished cutting. The scraps can be eaten as a cook's treat, or put them in a plastic bag and freeze them for when you're having a cake craving.

To make the frosting: Remove 3-4 tablespoons of the strawberry roasting liquid to a bowl. Sprinkle the gelatin over the liquid and allow to rest for several minutes until set. If your strawberries didn't give off much liquid for some reason (perhaps because you ate it as you scraped it off the pan), use a few tablespoons of water instead.

Place the cream, sugar, and vanilla in the bowl of a stand mixer (or a regular bowl, if you're using a hand mixer) and beat for a minute or so. Put the gelatin in the microwave for about 10 seconds to liquify (it might take 15 seconds). Stir well so there are no clumps of gelatin, and with the mixer running on a fairly low speed, v e r y slowly drizzle it into the cream, beating all the time. Once incorporated, turn the mixer speed up and beat until medium peaks form. Don't overbeat, or you'll have butter. Scrape the cream into a piping bag fitted with a large star tip, or the tip of your choice.

To assemble the cake: Place a round of cake onto a cardboard cake round or on an aluminum-foil covered springform or tart pan bottom of appropriate size. Eyeball the strawberries. Do the pieces seem too big? Then chop them up a bit. Maybe you should just chop them up a bit anyway. Spread an even layer of strawberry pieces + some of the cooking liquid on the cake. Pipe on a layer of the cream, then top with another cake layer. Add another layer of cream, then another layer of cake. Top this third layer of cake with more strawberries and more cream. (You won't use all the strawberries. Eat them with ice cream or with a spoon.) Add the fourth layer of cake and pipe the frosting decoratively on top. Refrigerate cake until ready to serve.