We'd been meaning to try Blue Pit BBQ for a while and finally got around to it last month. Located in Hampden across Union Avenue from Union Craft Brewery and Artifact Coffee, Blue Pit is a bourbon bar as well as a 'cue joint. They offer 40+ bourbons, plus 20+ ryes, and dozens of other whiskies. There are a few cocktails, a list of beer in cans, and if you simply must have wine with your pulled pork (weirdo), they have a bottle or two of that hanging around, too.

Service is pub style. You order at a counter, take a number, then sit somewhere patiently and wait for your food to be brought to you. The bar area on the first floor has a few tables, and there's a patio, but we chose to eat upstairs where the tables are larger, the light is better for photographs, and there were no other diners (for it was 4pm on a weekend afternoon). The lack of chatter around us, however, meant we noticed the seemingly endless loop of music by Frankie Valli and The Four Seasons. Fine if you like that sort of thing (and my Dad did get into it quite a bit). 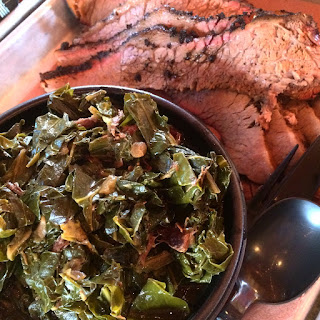 We went whole hog, so to speak, and ordered three kinds of meat and three sides--a pound of brisket, a half rack of ribs, and a pound of pulled pork, plus mac and cheese, collard greens, and baked beans. 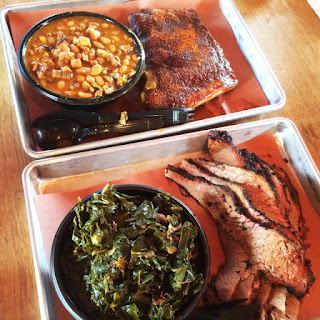 I am going to confess that we are semi-regulars at Andy Nelson's, that 'cue stalwart in Cockeysville. Andy's grub has only gotten better over the years (his beans are a-maze-ing), so it was really hard, nay, impossible, for me to not make comparisons. But I'm going to be as fair as I can here.

The brisket, rubbed with local Zeke's coffee before being barbecued, was pretty darn good. Smoky, but not overwhelmingly so, with a nice edge of fat that kept the meat moist (dry brisket is a sad thing). The bourbon-glazed St Louis-style ribs also tasted good, but they were very hard to cut apart with a plastic knife. That's not to say the meat wasn't tender, but there was some connective tissue thing going on in there which led to a bad hack job on our part. The glaze on the ribs is lightly sweet, but if you want more wet sweetness, there are several styles of sauce available in squeeze bottles on each table. Out of the sauce choices (which included mustard, vinegar, sweet and hot, and smoky), I liked the Zeke's coffee-spiked sauce. It was a bit sweeter than the others, but it reminded me a good deal of the house sauce at Cafe Tattoo, a bbq joint that used to be in Gardenville on Belair Road. (God, I miss that place.)

The pulled pork was nicely moist, if not particularly smoky, and was just fine without an extra dose of sauce (although I'd probably add some if I were eating it in a sandwich). 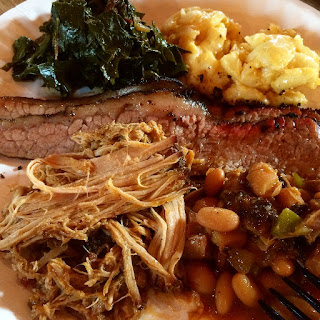 All three sides were good. The collards, made with neck bones and flavored with sherry vinegar were extremely tender; I can never get mine so soft. I loved the vinegar flavor, wished there was even more, and doused it with a bit of the vinegar sauce on the table to bring the tang up a tad. The baked beans, made with bits of both brisket and pork, were fine (and the only thing I'm going to compare unfavorably to Andy Nelson's, mostly because I love the latter so much). Finally, the four cheese mac and cheese was a nice creamy and slightly bland foil to all of the other textures and flavors on the table.

In addition to all the meaty goodness, Blue Pit also offers the new yuppie bbq nod to vegetarians and vegans--pulled jackfruit. I'd really hate to be a vegan in a bbq joint, but I suppose if they drink enough bourbon they won't notice that their sandwich isn't full of beef.

Service was great, mostly in that there was so little of it needed. Someone took our order and gave us cups for soft drinks. Someone else brought our liquor, and a third person brought all of our food--pretty quickly, too--and pointed out the location of extra utensils, and should we need them, carry-out containers and bags for transporting them home.

So...while not that favorite county bbq joint, Blue Pit more than holds its own. Plus it's a non-chain restaurant in the city. With enough good bourbon to drown in. Go.