Mr Minx and I attended a Mason Dixon Master Chef Tournament round one battle on Monday: Chef Fabio Mura of Grille 620 vs Chad Novak of Das Bier Haus.

The competition starts out with a half hour of cold prep. No cooking is allowed at this time, at least nothing that needs to be prepared with heat. So ice cream-making is fine, as is chopping, dicing, and breaking down meat products. 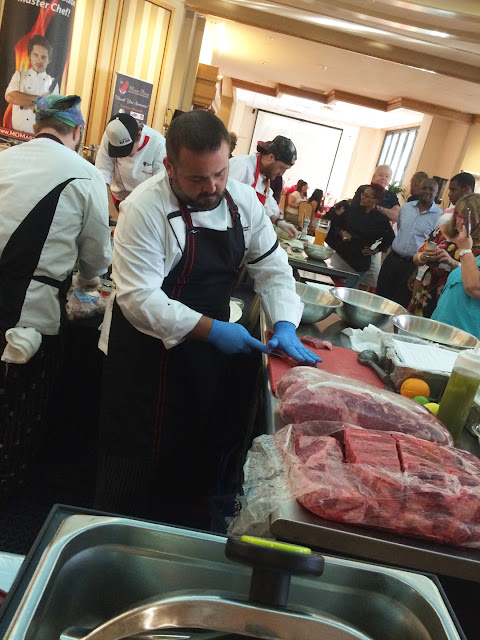 The theme of this battle was Game Day, and the teams were expected to produce three courses of food that would be appropriate for eating at a sporting event. There were theme ingredients provided by the competition's many sponsors, this time including Dr Pepper and bone-in pork butt, among other items.

After cold prep, the cooking began in earnest. Partway through, I was called over to assign mystery ingredients to the chefs. I chose to give Fabio ghost pepper smoked salt, while Chad got sriracha peas. Neither ingredient seemed to be an impediment.

During the competition, we purchased food and adult beverages from the Tournament's venue, the Inn at the Colonnade. Their restaurant, Alizée, offers a limited menu to Tournament attendees (the full menu is available inside the restaurant proper). 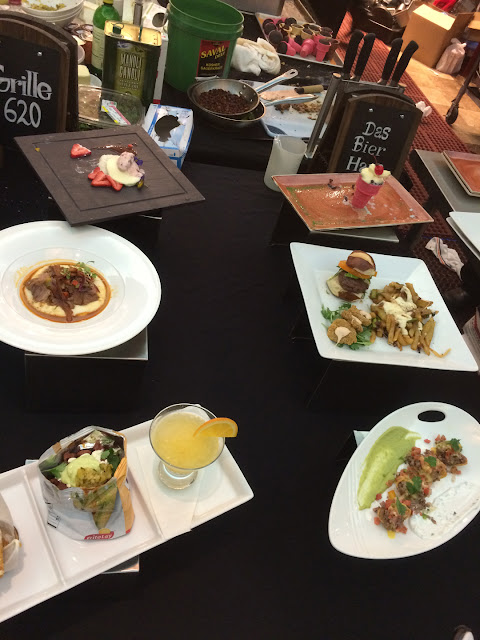 After an hour of cooktime, the chefs plated their food for presentation, then prepared plates for the three judges. (I was a judge once, back in 2010, which was fun, even though I don't think my opinion was taken at all seriously.) After careful consideration, for it was a close contest, Fabio Mura was declared the winner.

Chef Mura and his team from Grille 620 will face Brett Arnold from Smokin' Hot Bar & Grille on
Monday, July 18, 2016. Doors open at 5:30; the competition starts at 6pm and generally runs until 9:45pm. To purchase tickets for this or any other match, and for more details, go to the Mason Dixon Master Chef Tournament web site.