Some people make turkey for Christmas, but not me. If I never see turkey again, I'd be very happy! This holiday, my bird of choice was duck.

Meet Donald. I roasted him for 4 hours at 300°F and an additional hour at 350°F, after slashing through the skin all over. Most of the fat rendered out (and was greedily saved by me for cooking potatoes in the future) which resulted in crisp skin. 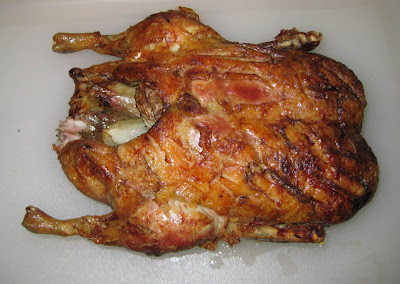 While he was a-roasting, I prepared an appetizer of chicken-fried sweetbreads with lemon mayo. 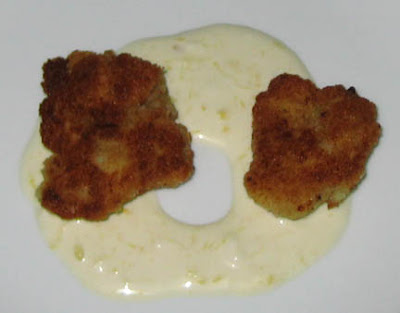 Man, sweetbreads are a pain-in-the-tuckus to make. First they have to be soaked for a couple hours, then poached. Membrane-removal is next, followed by several hours of pressing. After all of that, I cut them into small pieces, dipped each one in seasoned flour, then beaten egg, then seasoned breadcrumbs, and shallow-fried them in canola oil. The lemon mayo was a simple concoction of 2 T mayo, the juice and grated rind of one half lemon, and a pinch of salt.

Overall, it was pretty good, although I feel I could have poached the sweetbreads just a tad longer. The texture I achieved wasn't quite as firm as the sweetbreads we ate at Volt.

The duck was a much easier preparation. I wanted to make a riff on Thai Luong's Basil Duck, so I mixed up a chunky sauce of sautéed onion, fresh basil, garlic, and a couple of tablespoons of Thai chile basil sauce. 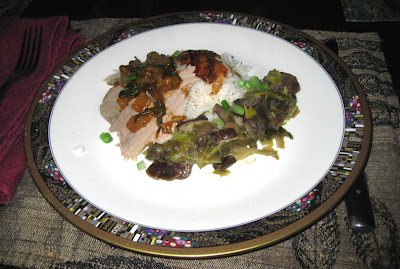 The sides were a leek and mushroom fondue (leeks, fresh shiitake, dried chanterelle, and white mushrooms cooked in butter and olive oil until the leeks "melt" and the mushrooms are tender), and Jasmine rice. 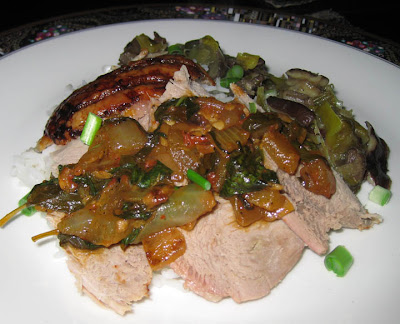 Everything turned out deliciously, and I impressed even myself.

For dessert, I put to use some of the many cookies we had on hand and made ice cream sandwiches. This was accompanied by hot chocolate. 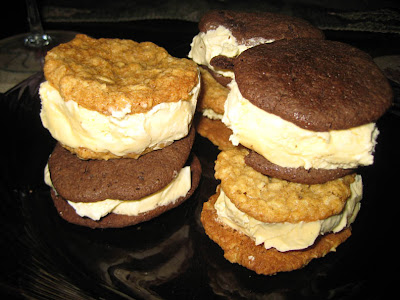 A shame Mr Minx and I had only one guest for Christmas dinner. It meant more food for us...which is not necessarily a good thing. [urp]