The Minxes (including Papa and Bro) are rather obsessed with duck. I think it might be our favorite meat; definitely our favorite bird.

Some years ago, Papa Minx told tales of a duck dish he discovered at a Thai restaurant in Herndon, VA, called Thai Luang. The dish was "crispy duck with sweet basil," noted on the menu as the "heart of Thai Luang." Eventually, the family descended upon Herndon and partook of this mythical dish; it was as delicious as promised.

Now, Herndon is a bit of a haul for us Baltimoreans, particularly Papa Minx who resides in the wilds of Bel Air. But we felt that for such an occasion as Father's Day, we would make the journey. And we would eat Basil Duck. Or, three of us would. Mr Minx, ever the maverick, ordered a special: fried pompano with ground pork and ginger. He also tried a special appetizer called something like "chicken curry puffy" which turned out to be empanada-like pastries stuffed with a mild curried chicken and served with a cucumber salad. Minx Bro and I ordered Tod Mun, or Thai fish cakes, plus bowls of Tom Ka Kai, chicken and coconut soup.

The tod mun were rather large, making us wish we had gotten only one order. They were also grease-free and well-seasoned with lime leaf. I thought they'd make perfect seafood "sliders." The soup was unctuous with coconut; I prefer it a bit more on the savory side.

The duck was as heavenly as ever - crispy, deeply chile-spiced (hot!), with a nice hit of basil. 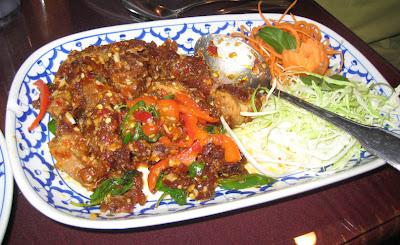 Was it worth the drive? Hell yes! It's a shame we barely have Thai food in Baltimore, much less anything this spectacularly good.

I actually live in Ashburn, not too far at all from Herndon and I had never heard of Thai Luong until I read your blog post. I tried the crispy duck--you're right, it was amazing! I'll happily take future food suggestions, thanks for the tip!