The Next Food Network Star 5 - Episode 2 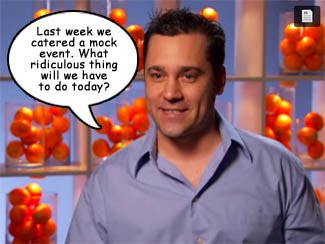 This week, the Wannabes head to the Food Network Kitchens to find a row of cloche-covered plates, Bobby Flay, and some really douchey-looking dude from Esquire Magazine. The theme of the short challenge is "bringing food to life," so I'm expecting some bad CGI animation. 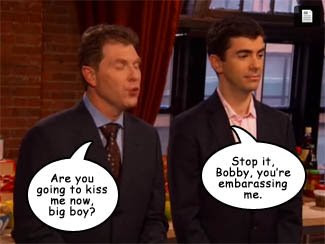 Under the cloches - ok, domes, if you insist - are ingredients that would be found in an Esquire man's pantry. I'm thinking this would be half-used jars of mustard, lumpy milk, and ancient eggs. True story: long ago, when I was a nice person, I thought to make a birthday cake for a guy I was dating. Because he was at work and I wanted to surprise him with it when he got home, I decided to make it in his apartment. He claimed to have eggs, butter, etc. and all I needed to bring was chocolate. And a bowl and a mixer. Well, he did have eggs...in a carton that was dated May 5. This was September 30. But before I read the sell-by date, I attempted to crack an egg into a bowl. The smell was so foul.... I won't go into my queasy-induced vaso-vagal syncope, fainting, etc. Oh, wait, I guess I just did.
Anyhoo.... Each wannabe had to take what was under the cloche and concoct a man-friendly dish in 45 minutes. Then they would have to serve the dish and do a one-minute, on-camera presentation. 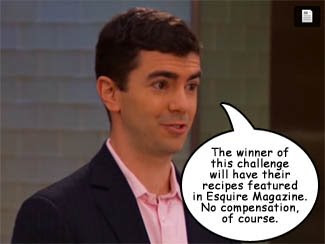 Eddie came out first and did well with both his meal and his presentation. 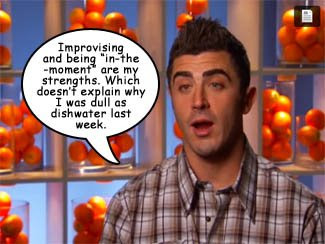 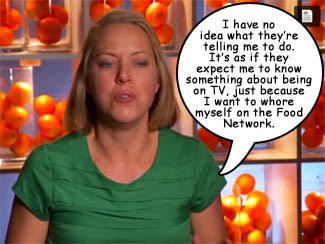 Tushface called her presentation both confusing and boring. And she looks constipated.
Jamika came out next and started out ok, but then had a brain freeze. After barely recovering, she said something about "taking advantage of [the food]." Great advice for a men's magazine! On those lonely nights, when its just you and that pork chop...who's gonna tell? 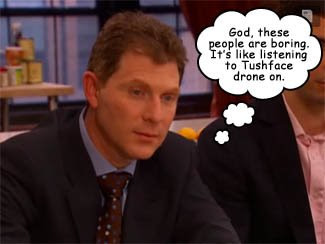 Jeffrey made some great food but his presentation was a little dull.
Teddy came out and acted like a crazy person. And he said, "coming at you from the mind of a chef" twice, so I'm guessing that's his catchphrase. They eyerolling from the panel suggested they didn't much like it. 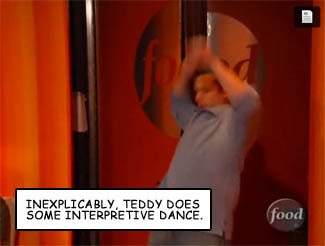 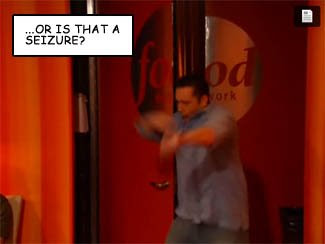 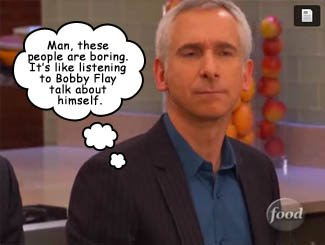 Brett came out next and acted insane. 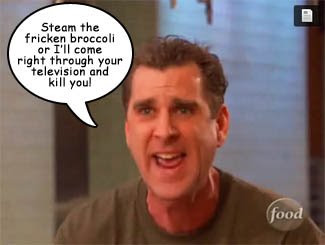 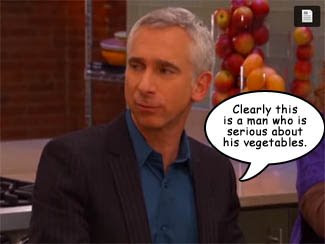 Michael started out strong but finished several seconds early. He filled the rest of the time intelligently. 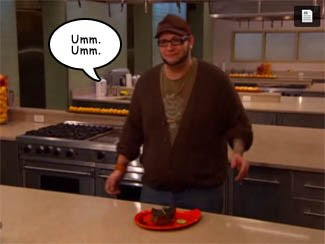 Or not.
Debbie was next and did well all around. Finally there was Katie, who served raw lamb chops coated with bran cereal and touted the benefits of anti-oxidants. Ugh. Who wants to watch that on a cooking show? Take that healthy crap to the Health Channel.
In the end, Eddie gets the win.
Next we see the Wannabes take a trip to the Hearst Building and visit the Good Housekeeping offices. 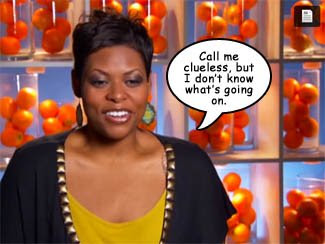 Patience! Giada and Good Housekeeping editor-in-chief Rosemary Ellis will clue you in. 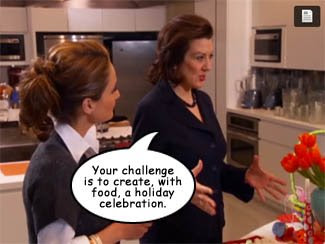 Not only do they have to create a holiday with food, but they have to use dumb props.
Since he won the Esquire challenge, Eddie gets to assign holidays to his competition. 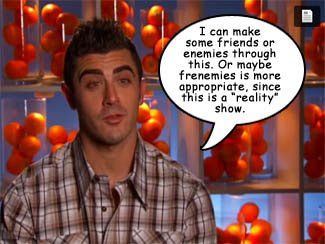 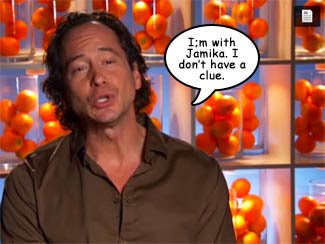 After grabbing their props, the Wannabes plan meals and start cooking. Melissa has issues with working in the too-large and unfamiliar professional kitchen. As she scurries about with time ticking down, Brett and Teddy offer to help her plate. 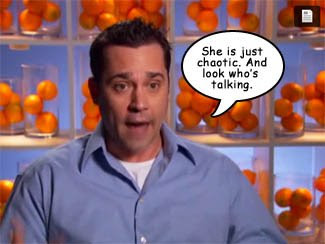 Calm down. You're so excited, you're blurry.
The selection committee is joined by Giada, Rosemary Ellis, and Good Housekeeping food director Susan Westmoreland, who wears the same befuddled expression on her face during the entire series of presentations.
Each Wannabe comes out with their props and food and does a 3 minute presentation. Melissa comes out first and Tushface thinks her food is "aces." Phillip is next and somehow links Mexican food to Groundhog Day. Well, he doesn't really make the connection but hopes his charm will win them over anyway. Jamika brings out some simple collards and corn bread but she presents the dishes well and the food is delicious.
Katie bores the group with her bland food and rambling about healthy blahblahblah zzzzzzzz. 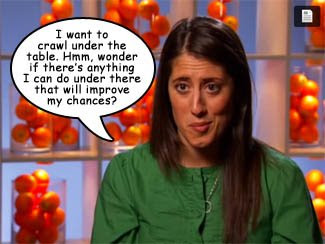 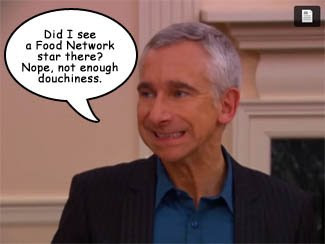 Teddy comes out and pretends to be a container of crabmeat calling out to him. This guy is off his meds.

Brett comes out and claims he's leaving the competition. The judges look at him blankly, as if to say, "you're leaving sooner or later, pal." But then he yells "April Fool!" and starts rambling about how the holiday is related to his mom and lobster tempura and who knows what the hell else. Maybe he should take Teddy's meds, since they're not being used.
Debbie makes her Mardi Gras presentation and is considered "a joy to watch," by Fogelstein. 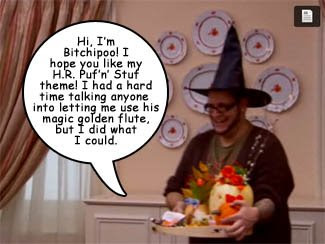 Michael is deemed inventive, and Rosemary Ellis says "he knows who he is." Yeah, we do too.
Finally out came Eddie, who rambled on about his girlfriend and intimacy until Bobby got squicked and made him stop. Unlike in the Esquire challenge, he was boring and his food was under-seasoned. 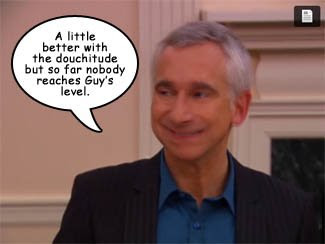 Giada was off her meds too, insisting that Eddie was insulting. 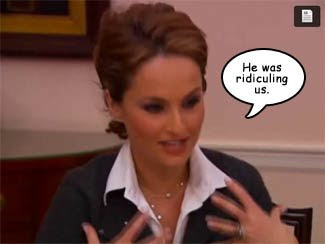 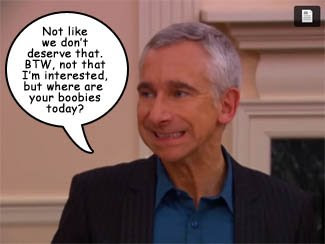 Finally, the painful presentations are over and the Wannabes head to the Screaming Yellow Room for judging.The network must have realized that the room is just too damn bright, as the lights are dimmer than they were last week. 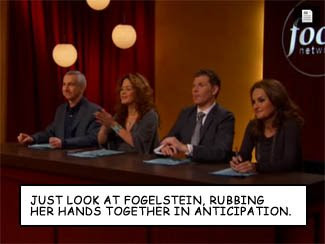 Giada admonished Katie to inspire, not to lecture. She then got on Eddie's case for being insulting and sharing too much. 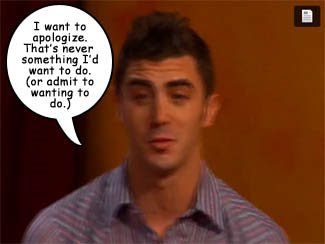 It's my dream to someday insult a Food Network Star to his or her face. Until then, I have this blog.
Melissa is complimented on her food, so Brett steps in and tosses her under the bus because he and Teddy helped her plate. 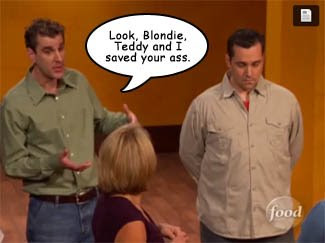 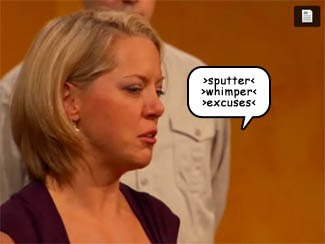 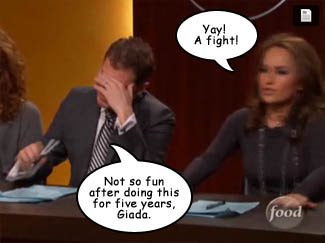 That caused Tushface to ask if she could execute her meal on her own. 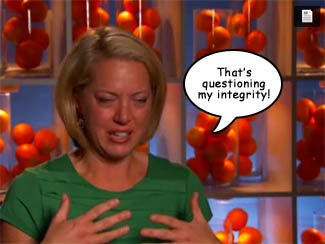 Honey, if you had any, would you be shilling yourself to the Food Network?
Finally the committee chose their Top Three - Debbie, Melissa, and Jamika. Because Jamika was so natural in her presentation and her dishes were simple and good, she won.
The Bottom Three this week were Katie, Brett, and Eddie. I would have tossed out Anti-Oxidant Girl because I'm already sick of looking at her and her crazy eyes, but instead they gave Insane Brett the boot. 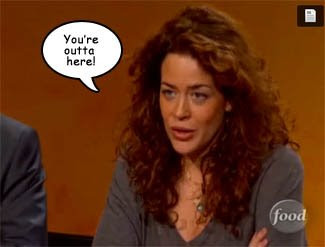 Because Jamika won the challenge, we next see her in a cute lavender coat heading back to the GH offices to create a dish to be featured in the July issue of Good Housekeeping magazine. I wonder why they didn't use her recipes for corn bread and collards?
Next week - ah, do you really care? The Food Network doesn't. They can't wait until it's all over, as evidenced by the finale countdown they have on this page.
Posted by theminx

They really can't, can they?

I still have no idea why the heck Brett decided to just pounce like that. He's lion, ROAR!

* Teddy was doing a seizure dance. There's a point where a cute face just isn't enough, so Teddy has to bring on the crazy!
* Katie is buying too much into the raw food movement.
* Katie or Eddie shoulda left last night.
* Eddie is pretty damn lucky to have a GF that is actually willing to put up with his babbling.

"I had a hard time talking anyone into letting me use their magic golden flute." Bahahahaha!

I know this is weird, but I am so crushing on Michael! He's adorable! I hope he wins so I can watch his show...
PS: You have my permission to call me crazy!!! :)