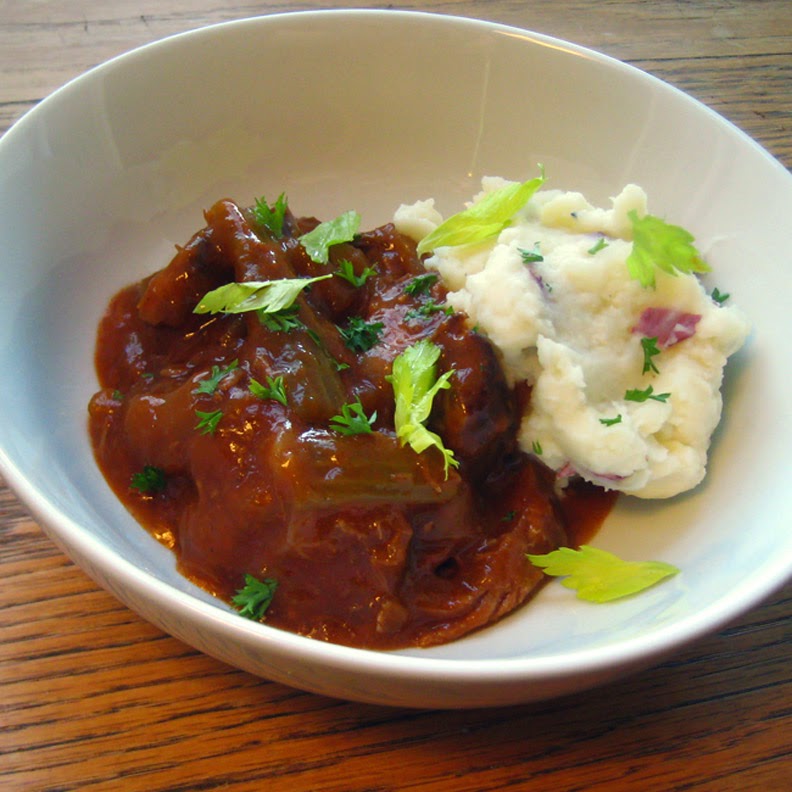 Sometimes a recipe sounds better than it actually is. I got excited about one for Bloody Mary Beef from Jamie Oliver's new Comfort Food cookbook. I like a good Bloody Mary on occasion, and think the flavors of horseradish, Worcestershire, and tomato would be smashing with beef. And it is, but if one follows the recipe to the letter, the flavors are a bit weak. Too much tomato, not enough anything else. But, if one ups the amount of aromatic Worcestershire sauce, adds horseradish (found in the original internet version but not in the cookbook version), and re-seasons the dish before serving, it's actually pretty good, with a nice depth of flavor

If I tinkered with it enough, I could probably make it great. For now, though, this is a pretty good stew to make when you have a bit of time on the weekend. It's great with horseradish mashed potatoes, but it makes such a large amount, you'll find yourself serving it again later in the week as a pasta sauce or with rice.

Bloody Mary Beef (a Jamie Oliver recipe, with some alterations)

Heat a large pot or dutch oven over high heat and add the olive oil. Pat the roast dry and season generously with salt and pepper on both sides. Brown meat on all sides, about 10 minutes total, and remove from pan. Add celery and onion to the pan with a pinch of salt and cook, stirring occasionally, until they start to soften.

In a bowl, stir together the tomato puree, Worcestershire, horseradish, Tabasco, vodka, and lemon juice. Put the browned meat back into the pot on top of the vegetables and add the tomato mixture plus one cup of water. Toss in the bay leaves.

Bring mixture to a boil, then turn down to a simmer. Cover pot and cook meat until fork tender, stirring occasionally, about 3 hours. Remove meat from pot and shred with two forks or slice thinly. Add back to pot and stir well. Cook an additional hour. Taste for seasoning, adding salt, pepper, and additional Worcestershire and Tabasco, if necessary. It's not going to taste exactly like a Bloody Mary, but you want to at least get the idea.