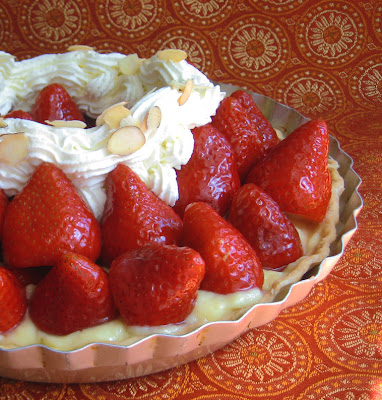 Back in the day, one of my favorite treats was a strawberry pie from Haussner's. A relatively simple-seeming affair of pastry cream, glazed berries, and whipped cream on a flaky crust, the pie was the perfect combination of fruity and creamy. Especially to this ten-year-old.

We ordered slices for dessert on the occasions we dined at the restaurant, but there were also special times that my Dad would bring a whole pie home. There was never any particular occasion (although he may well have been in the doghouse) but I know it was definitely a surprise that was welcome by all.

I normally opened the box and surreptitiously picked off the slices of toasted almond before anyone else had a chance to portion the pie. This resulted in a scolding from my Mother, who also liked the buttery crunch that the nuts provided.

Haussner's closed in 1999, but I can still taste that pie. Literally, because I made one recently. And that's where the "news" portion of the title of this post comes in.

Mr Minx and I are working on a second book. This one will be called Baltimore Chef's Table, and will feature recipes from restaurants all over the Baltimore Metro area. Since there's a recipe for Haussner's strawberry pie floating around the Internet, I thought it would be fun to include it in the book - only after I made it at home and adjusted it to fit my memories.

The photo above is my result. It's not as tall as the pie from Haussner's, where they used very large berries, and the glaze isn't red and oozy (which didn't seem as appealing to me as an adult). The flavor, however, was spot on.

If you want my variation on the recipe, you'll just have to hold on until Baltimore Chef's Table comes out in 2014. I promise there will be dozens of great recipes worth trying, and it will be worth the wait.