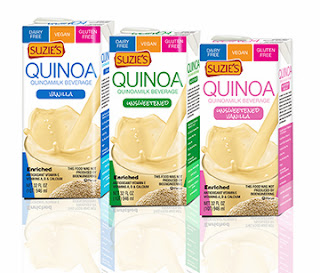 We went to the Natural Foods Expo at the end of September but have been so busy we haven't had an opportunity to go through our bag of brochures and business cards and sit down to write about some of the more interesting products at the show. Still haven't gone through that bag yet, but as I'm currently finishing up a glass of Suzie's Quinoamilk, I thought I should talk about it while it's on my mind.

For a while there in the summer I was attempting a vegan diet, at least during breakfast and lunch. That means no animal products of any kind, so I was left with using non-dairy milk in my coffee and cereal. I have always disliked soy milk, plus I have a mild allergic reaction to it. Rice milk is an abomination. Almond milk is much better, but I only like the stuff made by Blue Diamond. Coconut milk is ok, if you like coconut. But I find all of them leave an aftertaste.

Enter quinoamilk. As we were finishing up at the Expo, I noticed a table with little cups of off-white liquid. I was thirsty, saw that the product was made from quinoa, and thought why not? And it was very, very good. Not at all like cow's milk, of course, because it lacks that fatty mouthfeel, but much much better than all of the other non-dairy milks I have tried. And it doesn't have an aftertaste. The Suzie's rep was encouraged by my reaction and gave us a quart each of the original unsweetened and vanilla sweetened flavors to take home.

Suzie's Quinoamilk is great for people who have soy or nut allergies, and it's gluten-free, too. And while it's great in coffee and cereal, I enjoy a glass of it on its own, cold from the fridge. I would never do that with cow's milk, so I'm thinking that rather than drinking a glass of cold water with my chocolate chip cookies this Christmas while Mr Minx and MinxBro are drinking milk, I'll have me some Quinoamilk.

The stuff should be available at Whole Foods and other fine retailers nationally, but if you don't see it, ask for it!