After this week, there's only one more new episode of Top Chef Seattle. Can I get an "amen" up in here?! It's not that I haven't enjoyed this season (I haven't), it's just that it seems like it's gone on for.  so.  l o n g. That said, this season hasn't seemed as unbearably long as last season because we haven't had any of the same uncomfortable bitchery. This year's group--the Josie-haters notwithstanding--seemed to actually like each other. Still - no reason for seventeen weeks of this stuff. Especially when the final episodes need to be padded to fit an hour.

This week's padding has Sheldon and Brooke going home to their respective, ah, homes. It's six months since Seattle and Sheldon is a minor superstar back in Hawai'i. He's posing for photos and kissing babies and all of that nonsense. He's also completed a stage at a fancy restaurant, because he knows Brooke hangs with fancy chefs and she's his chief competition.

Meanwhile, back in Los Angeles, Brooke is back in her restaurants, dealing with paperwork and hanging with Roy Choi (whom we already know) and Sang Yoon of Father's Office. (A restaurant, not an actual office. They have a cute Web site, btw).

Eventually, Sheldon joins Brooke in LA and they travel together by Toyota Sponsormobile to the local outpost of Tom Colicchio's Craft, where the competition began for several of the cheftestants (and ended just as abruptly for others). Tom is there, along with Padma, Hugh, and Emeril, and they give the cheftestants the bad news: there's one other contestant, someone who happened to beat the pants off the rest of the competition in Last Chance Kitchen...

Kuniko. Carla. CJ - times six. Kristen beats CJ. Kristen beats everyone else, including Lizzie, who was the winner of the "Save a Chef" contest. Kristen steps out from behind a curtain and Brooke and Sheldon groan. Kristen's gonna be tough to beat. 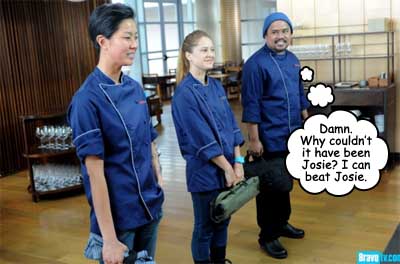 Then Tom delivers even worse news. Dinner service at Craft starts in three hours and the three of them will be providing the grub. Each cheftestant is responsible for one app, one entrée, and one dessert. And they're off to the walk-ins, choosing proteins and quickly planning their dishes.

Sheldon goes for spot prawns and quail, the latter of which Brooke thinks is very unlike Sheldon. She's not really sure what she wants to do. Maybe short ribs. Sweetbreads for the app. Both rather difficult to do perfectly in three hours because sweetbreads usually require several steps (soaking, cleaning, parboiling, pressing, frying) and short ribs need a slow braise. Kristen wants to start with a chestnut soup, followed by tuna. They're all saving worrying about dessert for later.

Brooke seems scattered; she's burning batch after batch of pistachios. Sheldon tells us he wants to show us the "new" Sheldon; now that he has some fancypants restaurant training under his belt, he wants to make something that's new to him. That doesn't bode well. Kristen realizes she's prone to over-thinking her food and wants to keep it simple this time. 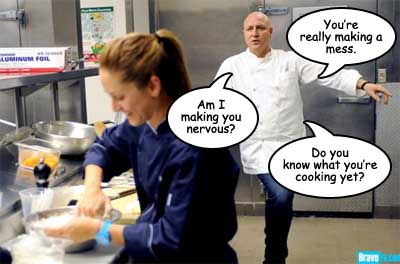 Soon enough time is up and Tom is in the kitchen to expedite. And he's a real cranky bossypants in that position. He makes the chefs as nervous as if this were the first time they had ever worked the line, and both Sheldon and Kristen DO work the line at their current jobs. In between fits of crank, Tom tastes all of the dishes.

Meanwhile out at the judges' table (not to be confused with Judges' Table), Hugh, Emeril, and Padma are joined by John Besh and Martin Yan. The first courses come out. They all seem to enjoy Sheldon's spot prawns in broth. Kristen's chestnut velouté is nice, but the duck rillettes are rich and the whole thing might need some acid. Brooke's sweetbreads are nicely crispy, but Hugh thinks they could be "cleaner" and sliced more thickly. Hugh actually has a lot of complaints about just about everything. 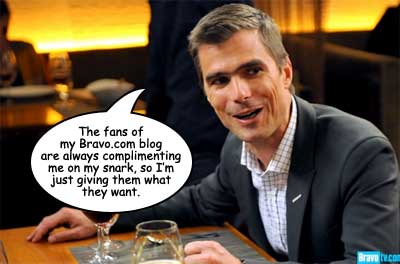 Brooke's shortribs are successful. Kristen's tuna is nicely cooked but the lemon curd on the plate is too bitter for Padma's delicate sensibilities. And Sheldon's quail with pine nut sauce leaves the judges with a WTF look on their faces. Where were Sheldon's usual Filipino flavorings?

Finally, while Brooke's brown butter cake was tasty and moist, the other cheftestant's chocolate concoctions were both misses, particularly Sheldon's raw fennel with white chocolate. It could have been a good idea - Tom seemed to think so initially - but the execution was flawed. 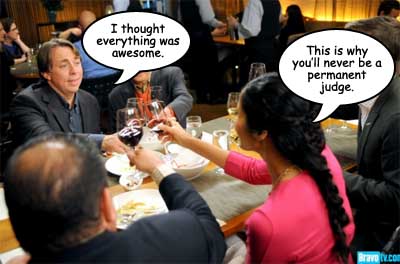 While Brooke worried that she would be out this week, it was clear that all three of her dishes were good enough to get her a pass to the final finale. So it was down to Kristen and Sheldon, both of whom played it pretty safe, according to Hugh.

Yan and Besh are dismissed and the others adjourn to Judges' Table. 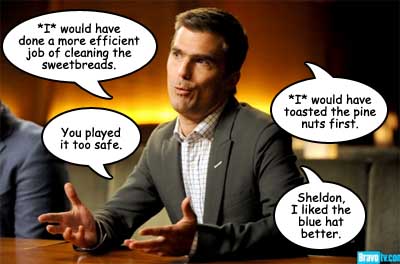 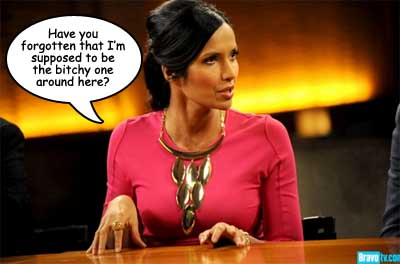 They don't like the "new" Sheldon, which was pretty apparent during the meal. So they send him back home to Hawai'i. This leaves Brooke and Kristen to battle it out in some hot girl-on-girl chef action, guaranteeing that Top Chef will FINALLY have another female winner, the first since Stephanie Izard in season 4.

Next week: the chefs battle in front of a live audience. I'm providing the laugh track.