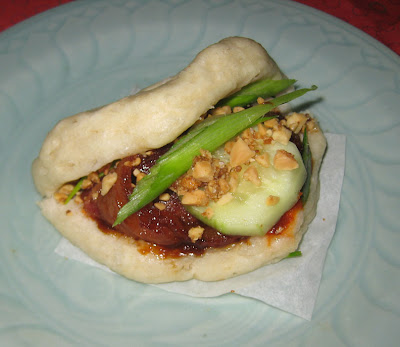 Both the pork belly and the buns are time-consuming to make at home. The belly needs braising and the yeast-raised buns require rising time. I'm not patient enough to do both at the same time, so a recipe using thick cut bacon in place of the belly, and commercial refrigerated biscuits instead of steamed buns seemed like a must-try. I gotta admit it even turned me on a little.

I was thinking that F&W's Grace Parisi was a genius as I googled for an Internet copy of the recipe to share here, but then I found that the biscuit-cum-bao idea wasn't exactly hers. Apparently, a cookbook author named Andrea Nguyen shared the technique in her 2006 book, Into the Vietnamese Kitchen, and she had learned it from someone else. No matter. The technique is still genius-y. Another clever tip from Parisi was to use a roasting pan, ramekins, and a cookie sheet, all wrapped tightly in foil, as a steamer for the buns. Much less-involved is a bamboo steamer, which I already had on hand.

So off to the supermarket to buy some bacon and a tube of buttermilk biscuits. The recipe suggested Pillsbury Grands, but we're not a fan of the odd flavoring that all Pillsbury biscuit-type thingies tend to have, so we bought store brand (Giant) instead.

Do refrigerated biscuits make adequate steamed buns? Yes, they do. While the flavor of the biscuit wasn't exactly the same, the texture was a good approximation. As far as the bacon is concerned - it's bacon. How can it be bad? That said, there's no way the thin-ness of even thick-cut bacon can equal a slab of juicy and fatty pork belly, but with the ginger and seasonings, it tasted fine. The original recipe called for mirin in the cooking liquid and hoisin on the finished sandwich. I didn't have mirin and felt the bacon was sweet enough without the addition of hoisin. YMMV. The recipe also called for bread-and-butter pickle slices for the sandwich, but thickly-sliced, lightly salted cucumber was even better, particularly since I decided to add a pinch of extra sweetness with some crushed peanuts, the way they serve 'em at Baohaus.

Put the bacon and ginger in a large saute pan and cook over medium heat until bacon is lightly browned on both sides. Pour off all the fat and add the chicken broth, vinegar, brown sugar, and soy. Cook over medium-low heat, turning bacon occasionally, until the meat is tender and the sauce is reduced to a syrupy glaze, about 10 minutes.

Fill a wok or 4-quart stock pot with about 2" of water and bring to a boil.

Cut eight 4" squares of parchment paper. If you don't have parchment, cabbage leaves will do.

Pop open the can of biscuits. Flatten each one slightly and fold in half. Put each folded biscuit on a piece of parchment or cabbage and add four to each of two steamer baskets. Place over pot or wok of boiling water and steam until buns are cooked through, between 10 - 15 minutes, depending on the size biscuits you use. (Pillsbury Grands-type biscuits come in at least 2 sizes.)

To serve, open each bun. Add a slice of bacon, top with a bit of Sriracha (if desired) and garnish with scallions, cucumbers, and peanuts. Close buns and eat right away.

Pulse peanuts in a food processor until finely chopped but not so long that it becomes peanut butter. Or do as I did - put them in a plastic zip-top baggie and pound them with a meat tenderizer.

Pour the crushed peanuts into a small bowl and add the salt. Stir in the agave syrup - this is more to stick the little bits of peanuts together (so they don't all fall out of the bun) than to add sweetness.