I seem to remember eating a lot of pizza in my childhood. Back then, my family got stuck in culinary ruts quite easily. My uncle Frank, who lived downstairs with my grandmother, used to dictate the big meal of the day on Saturdays, which was usually carry-out from a local joint. For the longest time it was chicken from Bair Brothers in the Broadway Market. After I complained about the 12th weekend in a row of Western fries, Frank switched his alliance to George's Beef 'n' Beer on Broadway and their pizza with raw onion, sausage, and mushrooms. After a couple of weeks, I developed a serious aversion - that still holds today - to "fresh dough" pizza and limp french fries.

When Uncle Frank wasn't calling the shots, we got pizza from Pappy's (my favorite, mostly because I loved birch beer) until they disappeared. Sometimes we'd go to Matthew's, which was as bad as George's to my palate and garnered almost as many "not again!" complaints. And then Dad got fixated on Squire's, in Dundalk. We ate there so often, when we moved to Guilford in the mid-80s, I was thrilled that we'd be too far away to ever eat there again.

As luck would have it, I married a man from Dundalk, who reintroduced me to Squire's pizza. And I realized that it was one of the more flavorful pies around. With it's relatively thin and crunchy crust, savory sauce, and generous toppings, it became a favorite. I really do love their pizza sauce but I can't put a finger on the specific seasonings they use. Whenever I eat it, however, I get this memory of my mom's late 60s/early 70s-era spaghetti sauce, in those days B.R. (Before Ragu), which she always made with Spatini. Requests for Squire's recipe have always been greeted with a laugh, so I think I might be on to something.

In any case, the pies are still delicious. We usually get the Everything (mushrooms, pepperoni, meat sauce, sausage, and green peppers) sans green peppers because, as Nigella Lawson put it so succinctly on a recent episode of Iron Chef America, "green peppers are an abomination." There are usually so many bits and pieces of meat on the pie, half of it falls off as each slice is lifted from the pan. 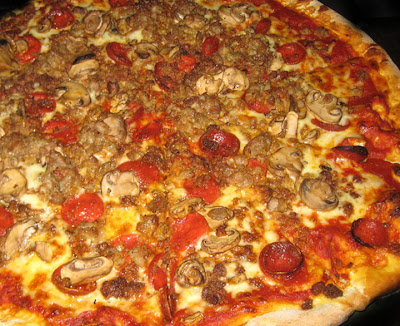 Recently we hit the place for carry-out and ordered a bunch of non-pizza items for once. The chef's salad was pretty standard but came with a nice sweet/tart balsamic house vinaigrette. 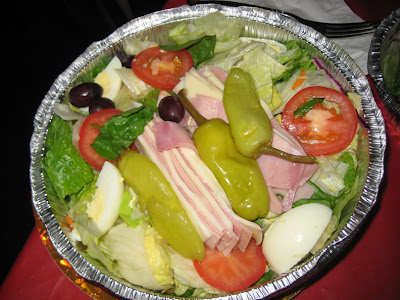 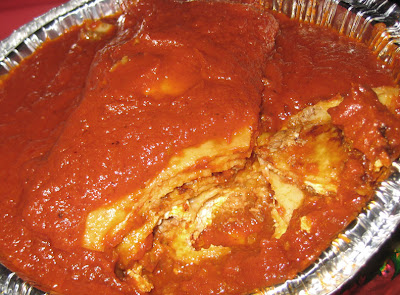 Mr Minx, who usually orders spaghetti with Squire's tender and delicious meatballs, decided to try the meat lasagna this time. It was served in a flood of sauce, and while not nearly as good as home made (or the lasagna at the Nautilus Diner), it was still very good. 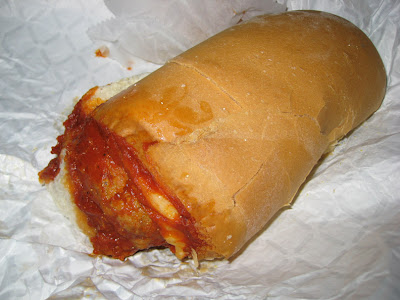 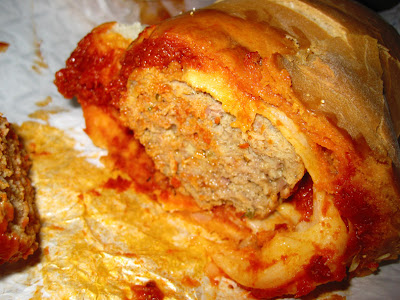 I'm a fan of Squire's meatballs as well, and my favorite way to eat them is "on heel," - three huge meatballs shoved into a hollowed-out half loaf of Italian bread. Served this way, without a split in the bread, the sandwich is fairly neat to eat; no meatballs or sauce can escape out the side onto your hand. And with sauce that good, it's best to eat it and not wear it.

While Dundalk has never been my favorite part of Baltimore, I admit I do look forward to trips to visit my mother-in-law a little more if a trip to Squire's is in the offing.