Last week - a two-hour episode. This week, 90-freaking-minutes. Is it too much to hope that they go to a normal hour format next week?

This week's Camera Challenge involves pizza, which means after 43 seasons, they're running out of ideas. Of course the pizzas created by each of the fourteen remaining Wanna-bes need to reflect their culinary point-of-view, so predictably Penny is doing something Middle Eastern and sexy, Katy is doing some crazy pizza that represented all 437 of her show concepts, and Susie is putting a Latino spin on her pie. 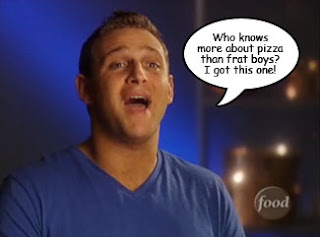 But there was also a happy twist... 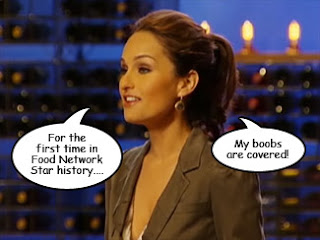 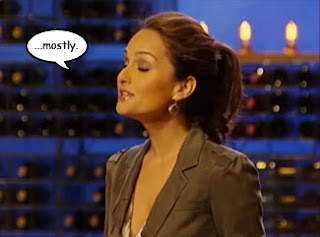 ...one Wanna-be would be eliminated after the Camera Challenge.

As the chefs scurry about to get their ingredients, Frat Boy announces that he "dropped a sausage on Mary Beth's head." 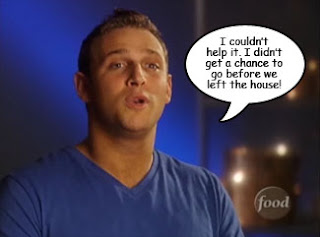 Vic, being Italian, thinks he has this challenge in the bag. 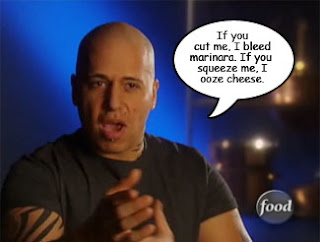 So how is this guy different from Guy Fieri? 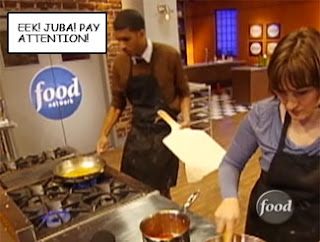 During the hubbub of cooking, Juba drops his crust on the floor and is forced to make a new one. Of course the second one doesn't have time to cook properly. Otherwise, there are few real mishaps in the kitchen. 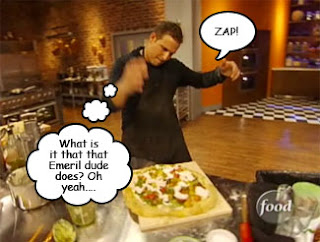 When time is up, the Wanna-bes hang out in the Green Room to wait for the Selection Committee to call them out one-by-one. Juba, predictably, is awful, as is his pizza. 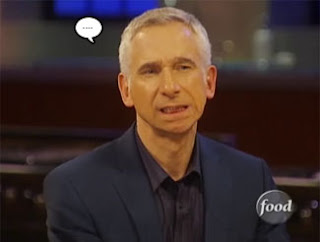 Curious George is awful, too, but at least his pizza tastes fine.

Penny changed up her act and is no longer bringing sexy back to the kitchen. Praise Allah! Instead, she's putting on the guise of a Middle Eastern Mom. The new persona, despite being almost as scary as the original Stilettos in the Kitchen witch, somehow convinces the judges to award her the win. It helped that her eggplant-topped pizza tasted good.

Guess who got sent home? 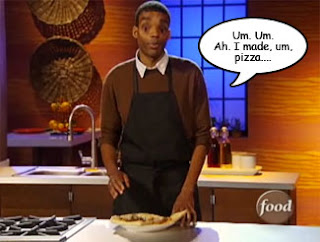 On to the Star Challenge.

The Wanna-bes have to take one of three restaurant dishes and make it accessible for the people who watch Food Network. As the winner of the Camera Challenge, Penny gets to assign her competition the dish that they will remake. And she's all about the strategery. Seeing Orchid as her stiffest competition, she puts her in the most difficult category - not only is the dish unfamiliar to Orchid, she's also working on a team with three obnoxious males. Penny picks the easiest team for herself - or so she thinks. It works out like this: 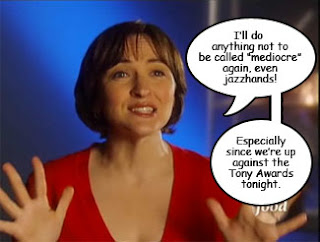 The Wanna-bes head to Whole Foods to shop. Most of them get one basket of ingredients - after all, this is about simplifying things. But Katy, wench of 1000 personas, also wants to use 1000 elements in her dish and ends up with three baskets. Oooh, it doesn't look good for her, but she keeps on smiling that rictus grin of hers.

Back at their venue, the Wanna-bes suit up in chefs' togs; Group Time Consuming is up first. They find that they have observers in the kitchen, namely Food Network personalities the Neelys, Anne Burrell, and Scott Conant, along with the usual suspects (Tushface, Bride of Fogelstein, Giada, Bobby) who are there to heckle the competitors as they cook. 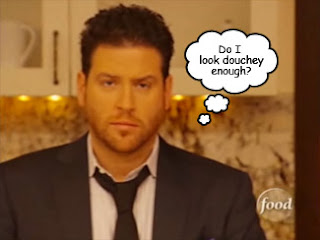 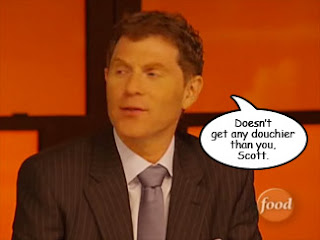 While Katy is preparing her dish of 1000 components, she sets her pan on fire. 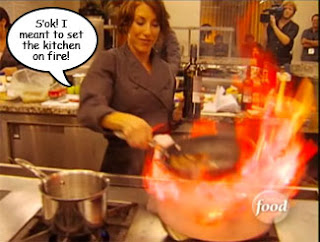 While Penny is being mean-spirited and judgmental, the Selection Committee, et. al., is just plain not impressed with Katy's need to do so many things at one time. Her dish is unnecessarily complicated and missed the whole point of the challenge. And she smiles too much. 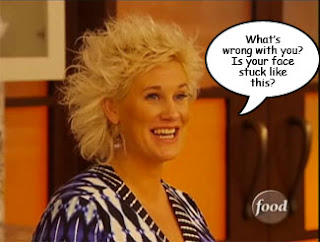 Penny, on the other hand, kinda copped-out by making a steak sandwich. But she gives another evil eye to the judges and they praise her. Mary Beth proved herself to be imaginative and scores points with the judges by adding bone marrow to her red wine sauce in order to replicate the long-cooked flavor of the original dish. Susie also impresses with her stew.

Group Experiencing Technical Difficulties is next. Jeff complains that the kitchen is the hottest he's ever been in, as sweat pours off his forehead, down his nose, and onto his summer rolls. 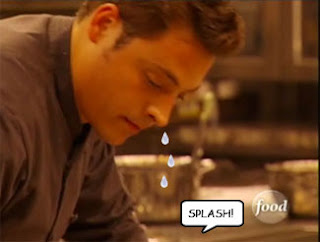 After Giada calls him out on it, he says something about not wearing a hat because his hair is the only thing he has going for him, which gets a chuckle from the judges. While he's entertaining, his food falls short. On the other end of the kitchen, Alicia is in a panic, being thrown off by the fact that people are watching while she's cooking. Her bacon-wrapped scallops end up being overcooked, which throws her into a tizzy and another crying jag backstage. Drama! 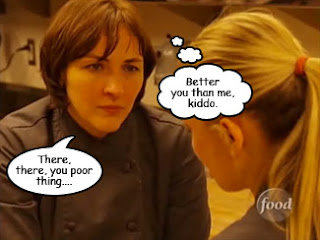 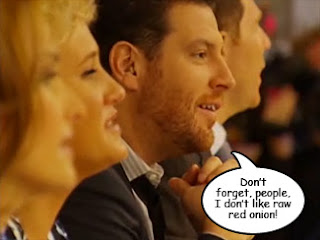 Finally, Group Expensive Ingredients was up. Orchid carefully positioned herself in a part of the kitchen far away from the dudes she is stuck working with. Frat Boy acts, well, like a Frat Boy, and sets his saute pan on fire just because he can. And then, to his chagrin, he finds that Pernod is the only hooch in the house and he has no freaking clue what it tastes like. The judges pick up on this and he is quizzed about the flavor of Pernod. He tries to bullshit his way around it by mentioning peppermint, and the assembled FN stars give each other knowing looks. 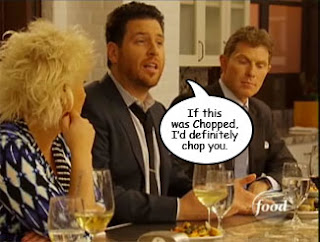 Curious George makes a lovely dish of fried calamari steak, but then bores the judges to death with his explanation of how he also incorporated clams as a "chewy element." Orchid, on the other hand, has a lovely personality but has given the judges a plate of hairballs, otherwise known as canned oysters.

After all of the cooking has been completed, the Wanna-bes assemble in front of the Selection Committee who choose a winner from each of the three groups. Mary Beth, who was both clever and engaging, wins for the Time Consuming gang, and hopefully banishes the word "mediocre" from the judges' vocabulary. Whitney, who didn't smile much but made great food, got the nod for the Technically Difficult group. And while there was no clear winner in the Expensive group, they give it to Curious George on the strength of his dish.

Everyone else is safe... 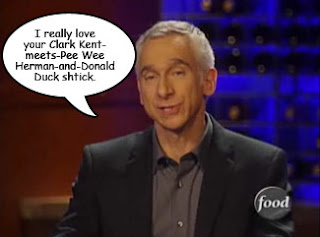 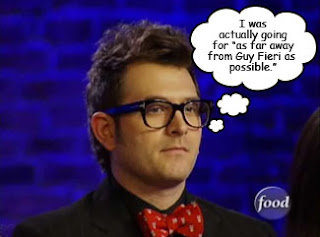 ...except for Alicia, Frat Boy, and Katy. It's pretty clear that while Alicia is prone to melt-downs, and Frat Boy is gonna be eliminated eventually, Katy with her scattered concept and fake smiley personality is going to have to go. Right. Now. 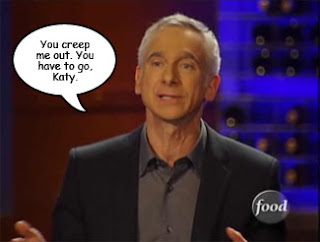