My second day in New York this month was full of the perfume-sniffing event called Sniffapalooza. (You can read more about the fragrance aspect of my trip here.) While sniffing is loads of fun, a gal's gotta eat, too.

Our Sniffapalooza luncheon was held at a restaurant called Opia, located in the Renaissance Hotel at East 57th Street near Lexington. There we were served a prix-fixe menu of salad with a mustard vinaigrette, chicken paillard (a.k.a. boneless, skinless chicken breast) with random fingerling potatoes and carrots, and a mini tarte tatin - for a whopping $40. I surely hope some of that money went to the Sniffa organizers, because in addition to the meal, we got a Sniffa-personalized vinyl lunch bag full of samples, and that had to cost them some $. The salad was ok, the tarte tatin was delicious, but the chicken breast was overcooked (do they come any other way?) and the only flavor it had came from time spent on the grill.

Every year I say this, but this time I mean it - no more Sniffa luncheons for me. They last too long and the food isn't worth the confinement at close quarters - or the price. There are plenty of other restaurants in the area, including POP Burger, where one can get a cheaper meal in a shorter period of time, allowing for a side trip to Saks or Barney's for additional sniffery. 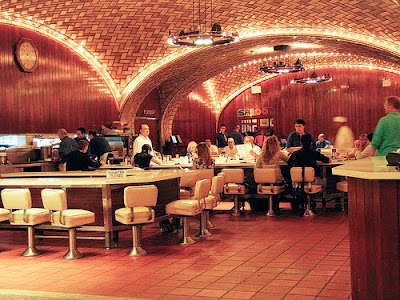 Later in the day, after a long and tiring olfactory experience, I decided I needed some dinner. At first I was going to wander around the neighborhood near my hotel, but then I noticed how deserted the streets were at 7:30 PM and changed my mind. Instead, I headed to Grand Central Station, down the block, and checked out the Grand Central Oyster Bar, where I sat at one of the counters. The menu was huge and rather intimidating, and I briefly considered playing it safe by ordering soup, salad, and some fried oysters. But after a consultation with the very busy but extremely friendly waitress, I decided to try the "seafood Marseillaise soup with saffron" and the "Foursome of Seafood Salad."

Marseillaise my ass - the soup was Maryland Crab, seasoned not with saffron but with Old Bay, and with small chunks of fish substituting for the customary blue crab. Not what I expected at all, but a fine rendition of a Maryland favorite. As for the "Foursome" (banka banka bank) it included a pile of Caesar salad topped with crabmeat, a slab of poached salmon topped with sauce vert, two huge steamed shrimp in a tangy dressing, and a hollowed-out bell pepper full of squid in a basil sauce. While I thought there was too much grated cheese on the Caesar (making it gritty-textured), I loved everything else. The salmon was perfectly cooked, and the squid was incredibly tender. And the portion was huge, so I sadly left some behind (no fridge in the hotel room).

Thus sated, I rolled back across the street to the Fitzpatrick Grand Central and watched some TV before bed. And had a few bites of one of the Momofuku Milk Bar cookies I had purchased the day before.

The first thing on the next morning's schedule was a "breakfast" at Bond No. 9, a perfumery in the East Village. I hate attempting to balance a mini bagel and fruit salad on a plate while drinking coffee and smelling perfume - it's awkward at best. Instead, I thought I'd have a real breakfast at the hotel dining room, a.k.a. the Wheeltapper Pub. I sat at a booth in the "Carriage," a long narrow room with delusions of being a railway car (according to the hotel's Web site). I ordered hot tea, 2 eggs over-hard (because I can't trust an order of over-easy to be snot-free), Irish bacon, and toast. The tea came in a trick carafe: when I poured with the lid closed, it dribbled into my cup; when I allowed some air in by opening the lid just a skotch, tea came flooding out. The eggs and bacon were perfectly fine, but the combination of heavy plate on slippery laminated-cork placemat made for dangerous dining. And the lighting was completely depressing. When the waiter asked if everything was ok, I said, "apart from the trick carafe, slippery placemat, and depressing lighting, everything is great!" he said, "not so much on the ambiance, huh?" In a few moments, he went somewhere and dimmed the lights, which helped a bit but prevented me from reading the book I had brought along. Sigh.

Maybe the place is better with a couple three Guinnesses, but I don't plan on finding out. Still, better than bagels and fruit salad.