We had several odds and ends of cheese in the fridge (Jarlsberg, chipotle cheddar, mozzarella, white cheddar), so I thought I should use it in some mac and cheese for Saturday's dinner. Although I wanted a baked mac, I just made my usual stovetop mac using Alton Brown's recipe because I was too lazy to make a white sauce (plus we didn't have enough milk).
Because the chunk of chipotle cheddar was sizable, I wanted to emphasize that Tex-Mex vibe. I sauteed half a chopped onion with one Mexican chorizo and added that to half of the prepared mac and cheese (the other half I tucked away in the fridge for future use).  I also added three scallions, chopped, a handful of chopped cilantro, and topped the dish with some crushed Garden of Eatin' Red Hot Blues spicy blue corn tortilla chips. 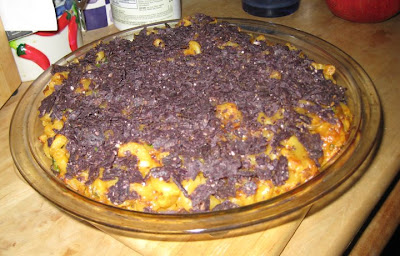 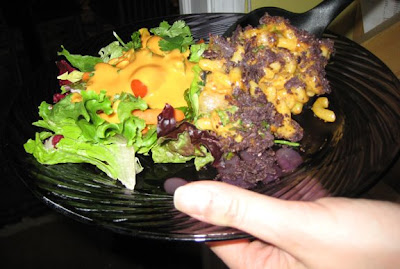 It's not as custardy as baked mac and cheese should be, but it had a texture very similar to my mom's (the gold standard), and she used a roux and fairly al dente macaroni.  Mr Minx and I thought it was delicious, and I might just add this tasty dish to my regular repertoire.
Posted by theminx