Because I enjoy recapping Project Runway, I thought I'd try my hand at doing the same for Bravo's Top Chef, which made its Season Four debut last night. Judging from the high quality of the dishes turned out in this episode, I think this will be a strong season. Not sure how high the drama quotient will be yet, although that's not as important a consideration to me when food is involved.

The show starts off with our cheftestants arriving in Chicago. They go to Pizzaria Uno for lunch and an attempt at getting to know each other. There are entirely too many of them at this point, so it will be a while before I get the names straight. Speaking of straight, it turns out that chefs Zoi (pronounced "zo-EE" not "zoy" btw) and Jennifer not only both hail from San Francisco, they're a couple. Awww! Was this Bravo's feeble way to add drama to the show? Are we going to see their relationship break down over the pressures of competing against each other? Tune in next week!

Lunch at Pizzaria Uno was a big hint as to the theme of the first Quickfire Challenge of the season. After heading to the Top Chef kitchen (courtesy of of the Glad family of products, the pantry supplied by Whole Foods, not to mention GE Monogram appliances) Padma reveals that their task is to create their own signature deep dish pizza in 90 minutes.

As the chefs scramble about, we get to know a few more of them. Mark is from New Zealand. He is in desperate need of defrizzing serum. 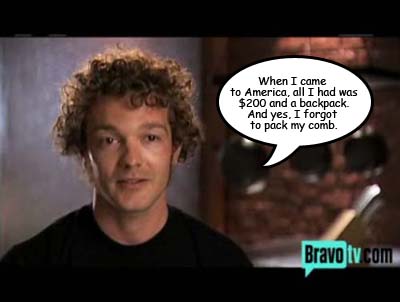 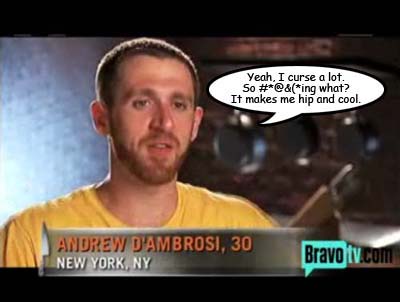 At the end of the 90 minutes, the chefs box up the pizzas and deliver them to a lovely mansion. Rocco DiSpirito opens the door and the cheftestants pretend to be excited. 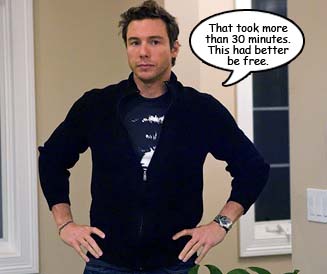 Padma and Rocco taste the 16 different slices of pizza and divide up the group into the eight best and the eight worst. Richard's and Mark's versions are singled out as favorites. 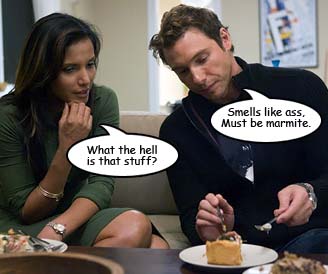 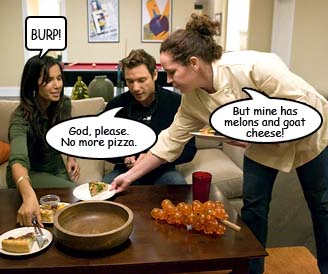 I must be getting used to Rocco's face, because he looks less weird and freakish to me. 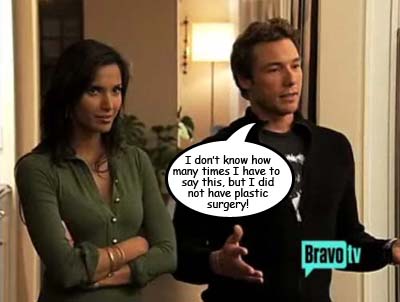 The contestants are told that the house they're in is where they will be staying for the duration of the competition. It's a pretty swank place, with a spacious kitchen and a pool table. And lots of bunk beds. I hope there's more than one bathroom. 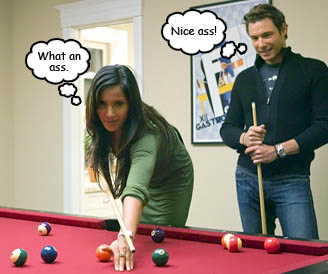 The next day, the chefs head back to the Top Chef kitchen for the Elimination challenge. 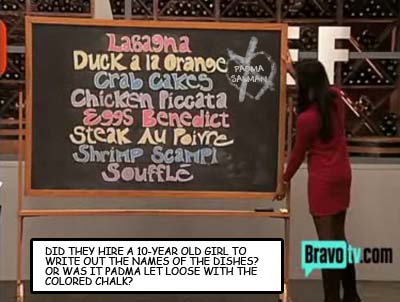 The eight yummy pizza chefs from the night before draw knives to see in which order they get to choose an opponent from the yucky pizza group. The partner then selects a classic dish from the list on the chalkboard. Each of the paired chefs must cook their version of the chosen dish and try to best the other.

Food shopping happens very conspicuously at Whole Foods. Cooking is a whirlwind. I love Top Chef because I can show off (mostly to myself) how much food knowledge I have squeezed in my tiny brain. As Ryan wrestles with the simple dish of chicken piccata, I shout at the screen, "dip chicken cutlets in egg and flour! The sauce is lemony! No - no breadcrumbs!" and "Souffles are all about the egg whites."

It's unfortunate for the chefs that none of them can hear me.

Then a very ominous-looking panel of judges walks into the kitchen - Rocco, Padma, Tom Colicchio, and Anthony Bourdain. 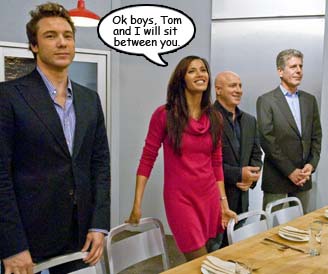 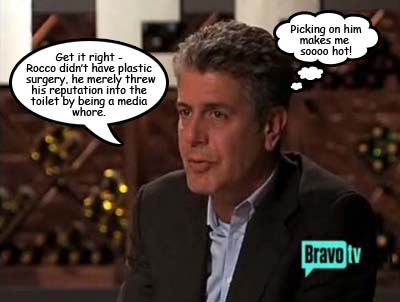 The chefs present their dishes in pairs, and for the most part, it's pretty easy to pick a winner from each. 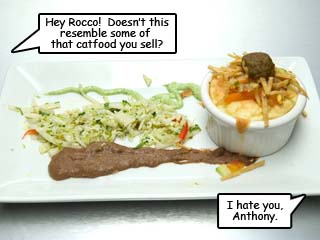 This was supposed to be a soufflé. 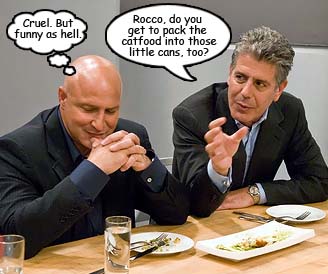 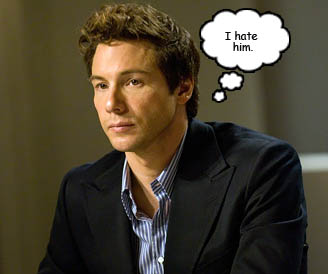 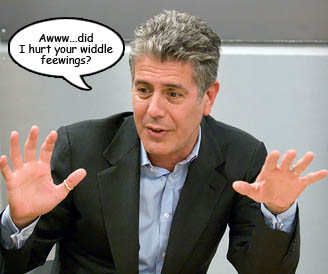 Ok, so none of that actually went down. Bourdain behaved himself, at least on camera, but you know he was just itching to cause some trouble with poor Rocco.

In the end, Stephanie's version of duck a l'orange wins. I think it looks pretty scrumptious and it might be a good way to use those duck breasts that are in my freezer...hmmm.... 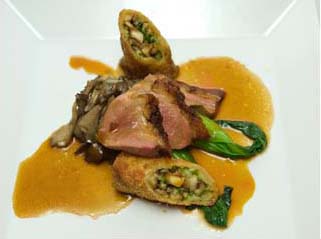 And Nimma, who was criticized in the pizza competition for having too little salt on her mushrooms, oversalts her scampi and completely blows her side dish. Padma shows her the door. 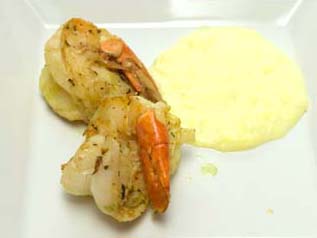 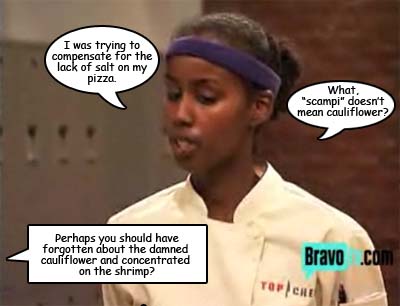 We didn't get to know Nimma, and that's probably ok. We won't miss her that way.
Posted by theminx

You know what's strange? Rocco's starting to grow on me.

I read something on Bourdain's blog about how Rocco totally saved Bourdain at a South Beach F&W Festival event, just by being self-deprecating and willing to be made fun of. It sort of warmed me to him, after years of cringing everytime I saw his face in a magazine...

Really hilarious post! Now that that snooze of a Project Runway season is over, I'm really psyched to get back into Top Chef. Rowdy, foul-mouthed cooks are more fun than catty, crying gay men any day!

Rocco TOTALLY has had work done. His face used to be all "droopy dog" and now its "high and tight".

Your photoshopping skills shine through - as always!

You had Brad and I laughing. Will Bourdain go off on Rocco like Rachel Ray? I can't stand Rocco - watching his previous restaurant show he was so whiny... still can't stand listening to him. Bring on some Tyler Florence or Bobby Flay - I could listen to them!

p.s.
Thanks for using the label "Top Chef", makes it so much easier to find the posts!