Believe it or not, I was inspired by Paula Deen, of all people, to make a pumpkin gingerbread trifle for Christmas dinner. At first I thought I'd be all gourmet about it and buy some of the delicious gingerbread available at Whole Foods at this time of year. The pumpkin custard would of course be Creme Anglaise, from scratch, with added pumpkin. But the more I thought about, the more I realized that nobody would know that I didn't make the custard from scratch, and that a trip to Whole Foods for one item was a waste of gas. Boxed mixes to the rescue!

The only gourmet thing about this recipe was the caramelized pears between the cake and pumpkin layers. And the freshly whipped cream. Oh, and the aged rum used to soak the cake layers. I think it was dynamite. Looked nice too. 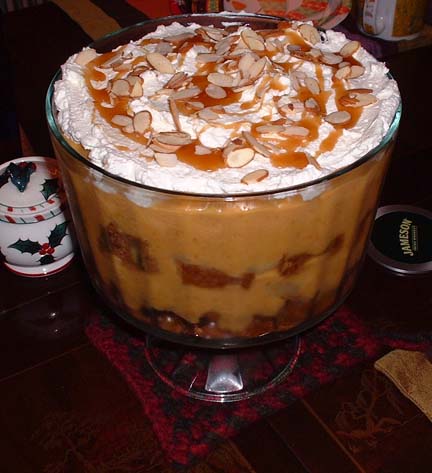 Place the vanilla pudding mix and milk in the bowl of a mixer and blend well. Add the can of pumpkin puree and the spices to taste. If you want, you can also add a tablespoon of brown sugar, but the dish seems to get sweeter the longer it sits, so it's not really necessary unless you have quite the sweet tooth. Refrigerate the pudding for an hour or two until it's set.

To assemble the trifle: place half the cake cubes into the bottom of a trifle dish, making sure to leave no gaps (tear cake into smaller pieces if necessary). Sprinkle with half the rum. Place a layer of the pears on top of the cake, then spoon on half of the pumpkin filling. Repeat the layers, using the remainder of the cake, pears, and pumpkin. Top with freshly whipped cream, sliced almonds, and drizzle with some of the leftover caramel sauce.

Place the water in a 12-inch nonstick skillet and pour the sugar into the center of the pan, taking care not to let the crystals adhere to the sides of the pan. Bring to a boil over high heat, stirring occasionally, until the sugar is fully dissolved and the mixture is bubbling wildly. Add the pears to the skillet, cut-side down, cover, reduce the heat to medium-high, and cook until the pears are nearly tender.

Uncover, reduce the heat to medium, and cook until the sauce is golden brown and the cut sides of the pears are partly caramelized, 3 to 5 minutes. Shake the skillet in a circular motion so that the pears don't stick and the caramel flows around them. Be careful - molten sugar is extremely hot! Pour the heavy cream around the pears and cook, shaking the pan back and forth, until the sauce is a smooth, deep caramel color and the cut sides of the pears are beautifully golden, 3 to 5 minutes.

Remove pears to a bowl and allow to cool. Pour the remaining caramel sauce into a separate container and reserve. There will be sauce left over after making the trifle - it's delicious over pound cake or vanilla ice cream, so don't waste it! 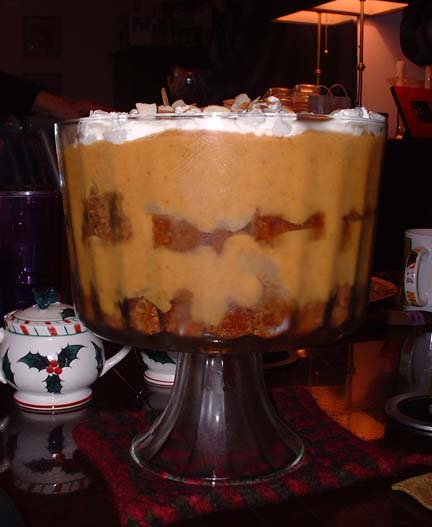 Like the festive red and green trivet? I knitted it myself. :)
Posted by theminx