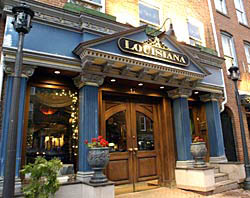 No, we didn't go to Louisiana, the state, but Louisiana, the restaurant. Neal and I have eaten there on several occasions and have favorite menu items. We hadn't been there in a couple of years and thought it might be a nice place to go for Valentine's Day.

It's hard enough to park in Fells Point on a given night, but impossible on a holiday, especially with snow on the ground. Thank heavens for valet parking, even if it did cost $5, paid in advance to a man who conveniently forgot at the end of the evening and tried to charge us again when he returned our car. Hello! You can give me your tip back now, sir.

Louisiana is an oddly-shaped restaurant. It appears deceptively wide from the front, but one must squeeze past the angled hostess desk and the patrons at the bar to get to the dining rooms. We were led past the empty original dining room into a new space beyond. There was at least a 15 degree temperature change between the inner dining room and the back room, and when I mentioned the chill to the hostess, she said, "oh well, I suppose it will warm up eventually!" She could have at least lied and said, "I'll go turn up the heat," to appease me. Instead, she merely pissed me off.

The new rooms still smelled of paint and stain and indeed were not quite finished, as the ceiling above us boasted raw wood and poorly painted areas. We were seated in the farthest back corner, behind a grand piano. Coupled with the frigid air it was Siberia, indeed.

At seating, the hostess presented us with a printed paper prix fixe menu--$75 for four courses. Patrons should be warned about prix fixe menus when they call for reservations, in my opinion. As I glanced through the selections, I was pleased to note that two of my favorites were available: the crab bisque and the shrimp and grits. But I was dismayed to find that no matter how I added up the courses in my head, there was no way that the food would cost $75 on a regular non-holiday evening. We did not receive a wine list, so I comforted myself by thinking that there would be a wine pairing for each course.

There was not. We did get a complimentary glass of champagne, as it was also the restaurant's sixth anniversary. The bubbly was sweet and thick, a bit like a muscat, with nice honeyed tones and some yeastiness. A nice change from the thin, vinegary offering that "complimentary" champagne is so often. Anyway, Neal and I decided that we didn't need additional wine and made the champagne last through the meal. I wanted to guzzle it at first, because it did momentarily warm me a bit.

The bisque--in which a crab or three has been allowed to paddle through a vat of heavy cream--topped with snowy lumps of crab meat, was barely warm, but still as delicious as ever. Neal's salad had a nice basil flavor, possibly from pesto in the vinaigrette.

Louisiana's shrimp and grits is one of my all-time favorite restaurant dishes, consisting of plump grilled shrimp coated with mild and flavorful blackening seasoning, arranged on a pile of nicely grainy grits and surrounded by a moat of corn emulsion. Am I wrong, or did a serving usually have three shrimp? Four even? On this night, there were only two, but they were delicious. The corn emulsion wasn't quite as...corny...as usual, but still quite delectable. And the grits were lumpy and cheesy and mmmmmm good.

On to the entrees. I didn't really notice that the scallops also had blackening seasoning on them because I was blinded by the word "lobster" in the description. Four plump scallops were arranged around an unruly pile of hash, the hash comprising tiny brunoise of potato with bell peppers and other vegetables and small chunks of claw and knuckle meat. The sauce around the dish was a bit too much like the corn emulsion and the bisque - a whole lot of heavy cream with delicate flavors. Ordinarily, I would get the soup and shrimp dishes and eschew an entree completely, but this night I had no choice. In retrospect, I should have ordered the filet, as I could have very easily doggie bagged it for use in a future supper. As it was, I finished the four scallops and the lobster chunks and left quite a bit of the saucy hash behind.

Neal said his grouper, topped with more of that rich cream sauce and a scattering of crawfish tails, was fine. I thought it was hideously overcooked. He says grouper is like swordfish and is supposed to be firm; I don't think fish should require a knife to cut. But I've never ordered grouper before and it's quite possible (although I doubt it) that I am wrong. The accompanying potato croquette was as big as a baseball and fluffy and tender inside. It reminded me of a coddie, in a way.

Dessert, mercifully, was small. We had no choice on this course and received one plate with a triangle of chocolate cake topped with chocolate mousse and chocolate ganache alongside a creampuff filled with pink whipped cream and topped with finely diced fruit such as mango and kiwi and the sweetest pomegranate seeds I've ever tasted. Weak coffee accompanied dessert.

The meal was a lot spottier than it should have been for the unwarranted expense, and the service also had its ups and downs. As the evening progressed and the restaurant was filled, our waitress was increasingly harried. The piano player arrived and drowned out our conversation. Our busboy removed ALL of our silverware and our bread plates after the second course, but refilled our water glasses seemingly after every sip. And it never did get warmer. But the flavors were true and familiar, albeit too unctuous, and we will, no doubt, patronize Louisiana again.
Posted by theminx