First, I would like to commend the hearty folks of New Orleans for going on with their Mardi Gras celebration today. I know it's still pretty sad down there, with thousands still displaced and little relief in sight, but it's important to keep up spirits. Laissez les bons temps roulez!

Second, I was reading Marianne's blog this morning and her post on Open-Faced Tuna Burgers with Wasabi Mayonnaise 1) made me drool; 2) reminded me of a grilled tuna sandwich I had some years ago. Tuna is a tricky fish to cook, as they get dry and inedible with too much cooking. Even a few minutes can be too much. Don't try cooking tuna steaks on a George Foreman grill. Ever. They become chewy, sinewy-textured slabs in mere seconds, and the fish smell never seems to come out of the grill. Sigh. I'll bet Marianne's tuna burgers are scrumptious. 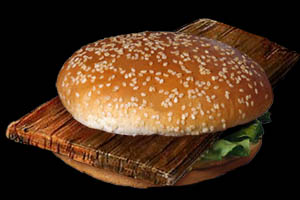 So to my sandwich story. I was having lunch with two friends at Loco Hombre, a Tex-Mex restaurant near Baltimore's Loyola College. I had had plenty of good meals there before--when I stuck to more traditional items like chiles rellenos and burritos--so never thought a simple sandwich would be such a disaster. A tuna steak on a roll with some sort of sauce (I've forgotten at this point) sounded like a good idea at the time, but I would soon find that I was quite wrong about that. The slab of tuna was cooked well beyond done to a state just shy of petrified. The accompanying sauce, served on the side in one of those tiny folded paper cups that some fast food restaurants use for dispensing ketchup, measured barely a teaspoon, and did nothing to alleviate the moisture issue. I'm not one to send food back to the kitchen; my Dad did it all the time, to my great embarrassment, and I understand how it can possibly put the kitchen further in the weeds than it already is. So I flagged down our waitress and requested some mayo for the sandwich, hoping that the additional external moisture would help somewhat. The waitress came back from the kitchen, empty-handed.

"The chef says the sandwich does not come with mayo."
"I understand that, but it's dry and I would like some mayo." I tried to be nice.

The waitress trooped back to the kitchen and once again returned without my condiment.

"The chef is adamant that the sandwich does not come with mayo."
"I don't care what the chef says, this thing is overcooked and so dry I think I found some sand in it. Either he gives me mayo, or he can eat it himself." I wanted to say "or he can shove it up his ass," but decided to be...well, not exactly nice, but not crude either.

"Let me get you something else then. I'll take the sandwich back."

I ordered a salad topped with rock shrimp. My two companions had already finished eating their meals, but I was hungry, so we waited and I ate. On our way out, the manager took me aside and apologized for the temperamental chef. And that was it. The sandwich was taken off my bill, but the salad wasn't comped. I think I was supposed to accept that the chef was a bit of a loon, and that was ok. But it wasn't ok; the place wasn't busy and his prima-donna attitude about something so insignificant as mayo was ridiculous. It's not as if I asked him to substitute a chicken breast for the tuna and change the roll to an everything bagel, toasted, and hey, could he put some cheese on that too?

We've never been back. I'm sure they're glad I'm not a professional restaurant critic.
Posted by theminx

Just saw this from your link on EL's blog...and I can sympathize. Not specifically with that sandwich, but I've also had not-so-great experiences at Loco Hombre. I haven't been back in a while, but on my most recent visits, I felt like the whole restaurant had gotten a little too big for its britches.