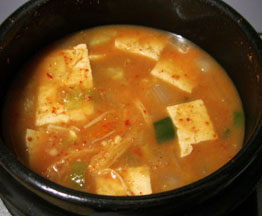 When I was a teenager, my father suggested that he, my brother, and I wander into a Korean restaurant in Towson to check it out. Dad liked to scope out restaurant menus, even if he didn't actually plan on dining in a place. I can't remember the original name, but it's now called Purim Oak (I always thought the "purim" part made it sound like a place that would have Jewish-Korean fusion cuisine.) I can't recall if Dad had eaten Korean food before, but neither David nor I had. We loved Chinese; how different could it be? Very. We ordered either kalbi or bulgogi, and I remember hating it. It was sweet and spicy and garlicky, and those flavors just didn't work for my then-unsophisticated palate.

I spent the next dozen or so years thinking that I despised Korean food.

I'm lucky that I'm married to a man with an adventurous palate. He was willing to try Korean. I thought enough years had passed since my unpleasant experience, so one warm weekend evening we ventured to Purim Oak. We lucked out - it was buffet night, so we could try numerous dishes at the same time. I had no idea what anything was, although I recognized the kimchi and vowed to keep it at arm's length. (The mere thought of the fermented cabbage takes me back to my "big sister" in high school, who apparently ate the stuff for breakfast every day. Phew.) After trying a little of this and a little of that, plus a generous portion of sushi (that helped me get over my aversion to raw fish somewhat), I discovered that I was enjoying myself.

We've paid many visits to that buffet since then, and have ordered off the menu as well. One of my favorite dishes is dolsot bibimbop; I love the crunchy browned rice that forms at the bottom of the hot stone bowl and would be quite content with an entire meal of that. On our last trip, Neal decided he would order the bibimbop so I went for something completely different. One of the buffet items was usually a soup with crumbled tofu and bits of ground pork in a spicy red broth, and I always made sure to have at least one helping of it every time. Looking over the menu, I had a hard time deciding which dish this was, so consulted the waitress who suggested doen jang chigue, a stew of tofu and pork in a spicy broth flavored with soy bean paste. The tofu came in slabs, not crumbled, and the pork was in pieces, but the flavor was the same. And the picture above is exactly what it looked like.

There was a pleasant heat to the dish, but it wasn't too spicy. The waitress came to check on me repeatedly; I assume she was expecting my head to explode. "Not too spicy?" she asked at one point. "No, it's just a little spicy," I said, holding my thumb and index finger about a quarter inch apart to demonstrate just how little. She looked dubious. Maybe only wimps eat at Purim Oak, but I don't find much there that's really spicy. None of the panchan pickles, despite the obvious red pepper content, are not. The gochujang doesn't seem hot either. :::shrug::: As long as it tastes good and I can still taste it, the heat matters not.

Purim Oak is the only Korean restaurant I've ever been to. I assume there are others around, but we're creatures of habit. Especially since Moxley's is around the corner, for dessert!

What other Korean dishes are recommended for me to try?

Image borrowed from Wikipedia and apparently placed there by ZenKimchi.
Posted by theminx