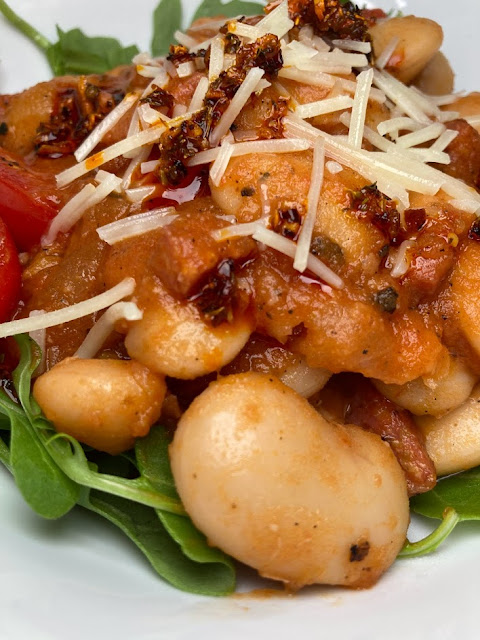 I was musing about what to do with two partial meat sticks--sopressata and salami--left over from Thanksgiving and decided I could cut them up and simmer the bits in a sauce. And then I remembered the pepperoni sauce that former DC restaurant emperor Mike Isabella created on Top Chef All Stars back in 2012. I tried it then, and like Isabella, I served it with chicken. This time, I didn't have any chicken on hand. What I did have was a plethora of beans from Rancho Gordo, including some big-ass Royal Coronas. The website describes these beans as "enormous, thick-skinned runner beans with a surprisingly creamy interior. One of our all-time best sellers, it's a versatile giant that works in all kinds of cuisines. A true pantry staple."
I figured they'd be a fine meat substitute in a brothy tomato sauce studded with cured sausage.
I made some changes to the original recipe. I used crushed tomatoes rather than whole, omitted the bay leaf and olive oil, and didn't puree the sauce. I also used half salami, half sweet sopressata, and rather than slice the meats thinly, I cut them into 1/4 inch slices, stacked several of them, then cut them into strips and then dices. The first time I made the sauce, I used pepperoni, which I added after cooking the onions in olive oil. The result was an oily mess that needed a lot of skimming. This time, I cooked the onion and the meat together. The fat that oozed from the sausage was the perfect amount in which to cook the onion, and there was no oil slick on top. I guess pepperoni is greasier?
I wanted a thicker and more homogenized sauce, but before I added it to the beans, it was more of a tomato liquid with bits of tomato and meat. A spoonful of tomato paste and a cup of starchy bean broth was just the thing to bring it all together. The sauce also needed a touch more acid, so I chopped up some grape tomatoes and stirred them in at the last minute.
Some arugula gave the dish color and a little extra pep. I also couldn't resist adding a spoonful of The Flavor Society pizza chili crisp, though Mr Minx didn't think the dish needed anything else.
I was pretty happy with the beans. They are very meaty, and though the skins are a tad firm even after several hours of soaking and cooking, the insides are lovely and creamy. Will definitely be purchasing them again in the future. 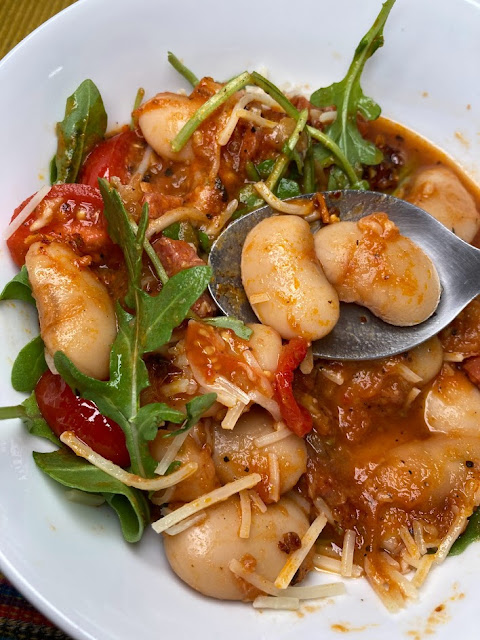 Pepperoni Beans
For the beans:
1 lb Rancho Gordo royal corona beans
2 stalks celery (leave whole)
2 large carrots, peeled and cut into large chunks
2 teaspoons salt
For the sauce:
2 teaspoon fennel seeds
1 pound Italian hard salami-type sausage, like pepperoni or sopressata, cut into 1/4" pieces
1 medium or 1/2 large onion, diced
5 medium cloves garlic, crushed
1/2 teaspoon crushed red pepper flakes
1 15-oz ounce can imported crushed Italian plum tomatoes
1 15-oz can of water
To finish the dish:
1 tablespoon tomato paste
1 cup reserved bean liquid
1 teaspoon of Italian seasoning
Salt and pepper to taste
1 cup raw grape tomatoes, cut in half (optional)
Parmesan cheese
Something green, like baby arugula or spinach
To make the beans:
Check beans for debris, and rinse thoroughly. Place in a large pot and fill with water to cover by about 2 inches. Let soak at least 2 and up to 8 hours. Drain the beans and either refrigerate, covered, until the next day, or proceed with recipe.
Put fresh water in the bean pot to about 2 inches above the level of the soaked beans. Add the celery, carrots, and salt and bring to a boil. Turn heat down to a simmer and cook for two hours, or until the beans are tender. The skins will remain somewhat firm and will not look cooked, so you should cut a bean in half and taste it to check the texture.
Once done to your liking, remove the beans from the heat. Fish out and discard (or eat) the carrot and celery debris. Strain the bean broth into a lidded container and set aside. Leave the beans in their pot.
To make the sauce:
Put the fennel seeds in a skillet and turn heat to medium-high. Shaking the pan and/or stirring the seeds frequently, cook until seeds smell toasty and start to brown, 2-3 minutes. Immediately remove from heat and pour seeds into a small bowl.
In a 12" skillet, cook the meat and onion together over medium heat, stirring regularly, until the onion starts to get brown and the meat begins to render its fat. Add the garlic and cook for a minute or so. Stir in the toasted fennel seeds and red pepper flakes. Cook for about a minute, stirring. Then dump in the can of crushed tomatoes and another can of water. Bring the mixture to a boil, then lower the heat so the sauce is gently simmering. Cook for 1 hour. If an excessive amount of oil pools on top, skim it off and discard (or use it to make a vinaigrette for a salad).
To finish:
Pour the sauce over the drained beans. Stir the tomato paste into the cup of reserved bean broth and add that to the pot of beans. Stir to combine, then turn the heat on to about medium. Simmer for about 30 minutes. Taste for seasoning. Stir in the raw grape tomatoes.
Place some arugula in the bottom of a bowl, spoon over some beans and sauce, and sprinkle with cheese.
Makes about 2 quarts.