I did and didn't eat as much on Day Two as I did on Day One. I ate fewer meals, but the sandwich I had for lunch was honestly enough food for the entire day. Read on.
My regular NY breakfast habit is a stroll down to Dominique Ansel Workshop in Flatiron. I've never been to the original bakery on Spring Street so have never eaten a Cronut. But I have eaten gingerbread croissants, pear tarts, canele, and kouign amann at his Workshop. This time I tried a coffee creme brulee pull-apart bun, made with the same laminated dough as most of his pastries, filled with a blob of coffee cream and topped with a wee creme brulee. Sweet, crispy, creamy deliciousness. I love that they serve La Colombe coffee, a brand out of Philly, and had one with some oat milk, which I sipped as I sat at an outdoor table and watched a crew of people unload what looked like pieces of a set from an enormous truck. 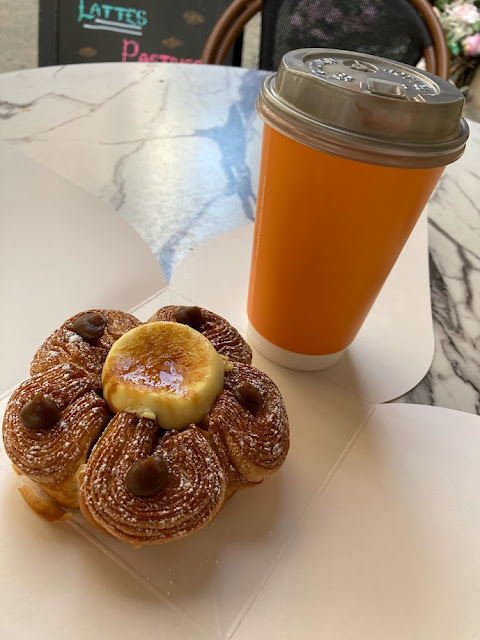 Daisy and I had both recently read about All'antico Vinaio, a Florentine import that opened last November on 8th Ave near Times Square. Though I had wanted to eat mostly Asian cuisines on this visit, after I looked at their menu, I was game for an Italian sandwich. La Paradiso, in particular, caught my eye--mortadella, pistachios, a pesto-like pistachio cream, and stracchiatella (fresh mozzarella soaked in cream) layered between slices of schiacciata, a bread that seemed the love child of focaccia and ciabatta. I thought we could share a sandwich, since these babies appeared to be around 8 inches square and 2 inches thick, but Daisy seemed shocked at the suggestion. We each ordered a sandwich and had them cut in half so we could share. Her choice was La Schiacciata Boss, with Tuscan ham, Pecorino, and truffle cream. Both sandwiches were stellar, with great bread, just crusty enough on the outside, and tasty fillings.


After that massive lunch, I just wanted a nap; instead we hopped on a bus for a trip to sniff fragrances downtown. We spent quite a bit of time at Mizensir, a narrow boutique filled with the creations of master perfumer Alberto Morillas. He is the creator of familiar fragrances like CK One, Acqua di Gio, and Marc Jacobs Daisy, as well as Must de Cartier, Penhaligon's Iris Prima, and Thierry Mugler Cologne. My rather vast collection of scents includes those last three, and may well include a Mizensir fragrance in the future. 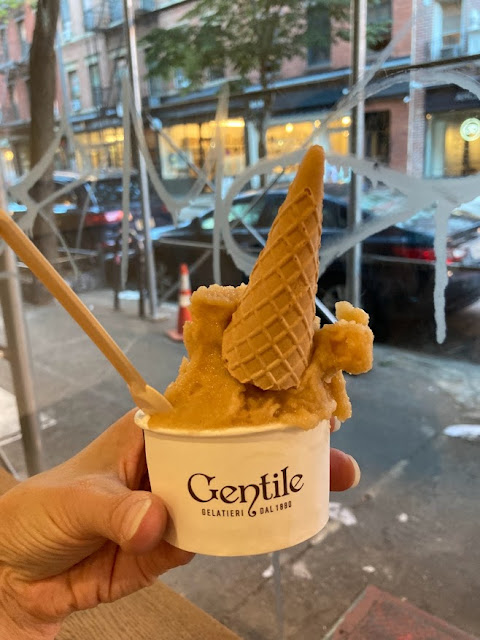 At some point, Daisy suggested we stop for tacos, and I looked at her like she had three heads. I was still working off that colossal bologna sandwich! I did find enough room for a tiny bit of gelato from Gentile. I noticed that they had sorbetto flavored with chinotto, a variety of bitter citrus popular in Italy. Recently I sampled fragrances from Abaton, which specializes in scents made with the fruit, and was curious to taste it. To balance the icy sorbet, I also got some plain fior de latte gelato. 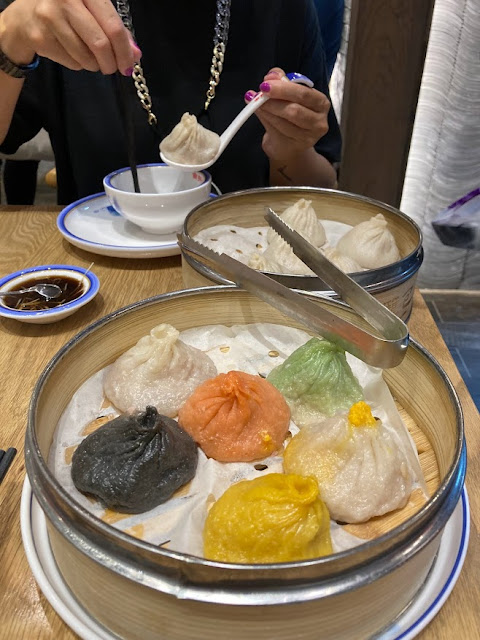 Later that evening, we stopped into the new Manhattan outpost of Nan Xiang, a Flushing, Queens favorite for xiao long bao, aka soup dumplings. Daisy chose the popular pork version of the dumplings, and I went for the Lucky Six combination platter that included pork, chicken, scallop and pork, pork and crab, pork and truffle, and gourd/shrimp/pork. While the oversized dumplings were tasty, the wrappers were somewhat uneven and doughy in places. Still, I enjoyed them, though I really didn't need any more food at that point.
It's amazing I got any sleep at all on this trip, with all the food I ate so late in the day. Perhaps my body was simply exhausted from all the digesting it had to do? Or maybe the 44,000 steps I walked in three days had something to do with it.
If you missed Day One, you can find it here.
Read about my sole meal on Day Three here.