I normally go to New York 2-3 times a year. A few years ago, I had the great fortune to make a friend with whom I share several things in common; number one on that list is food. When I visit the city, we get together for at least one dinner...and one supper. Yes, they are both on the same night, Hobbit-style.

Though there are places I might like to try, I always bow to her dining expertise. She had spoken highly of Via Carota, so we decided to meet there at 8pm one very rainy Sunday in December. I had Mr Minx with me, and he was looking forward to a dining adventure. Unfortunately, Via Carota takes no reservations and was packed. We were told to expect a wait that would last until 9:30. Weary and wet, I texted Daisy to tell her the bad news. She didn't believe the wait would be that long, but suggested a different restaurant near her present locale, a modern Sichuan place called Hao Noodle & Tea. We're always up for good Chinese food and agreed to meet her there.

The rain and cold had made us cranky, my feet were soaked through my shoes, I had to pee, and I didn't want to figure out how to turn ourselves around and find this place. Daisy stressed that it was only a few blocks away from where we stood, but we could call an Uber if we didn't want to walk. My Uber app didn't want to cooperate, so I called a Lyft instead. I should have known better. It's a rare occasion when Lyft doesn't do a bait and switch. They'll post one price when I summon the car, and then charge twice as much at the end of the ride. So while taking a Lyft to go the equivalent of 4 blocks was an outrageous idea to begin with, it was maddening to have them overcharge me yet again. Fuck them.

Until I got a cocktail, I was still a bit grumpy so let Daisy take over ordering for us. She had been there before, and everything she recommends is worth eating at least once and usually twice.

Food came out as it was ready, so cold dishes came out first: Lu Beef; Spinach in Ginger Sauce; and Le Shan Sliced Chicken in Szechuan Peppercorn and Chili Oil. Also known as bobo, bon bon, or saliva chicken (because it makes one's mouth water), the latter dish was incredibly tasty combination of cold steamed chicken, chili oil, black vinegar, sesame, and peanuts. Long after the chicken was gone, I was slurping up spoonfuls of the chili oil and peanuts.

The beef had been stewed in a spiced soy sauce and was extremely tender. The spinach was cooked until it was no longer astringent and dressed in a flavorful ginger and garlic sauce. 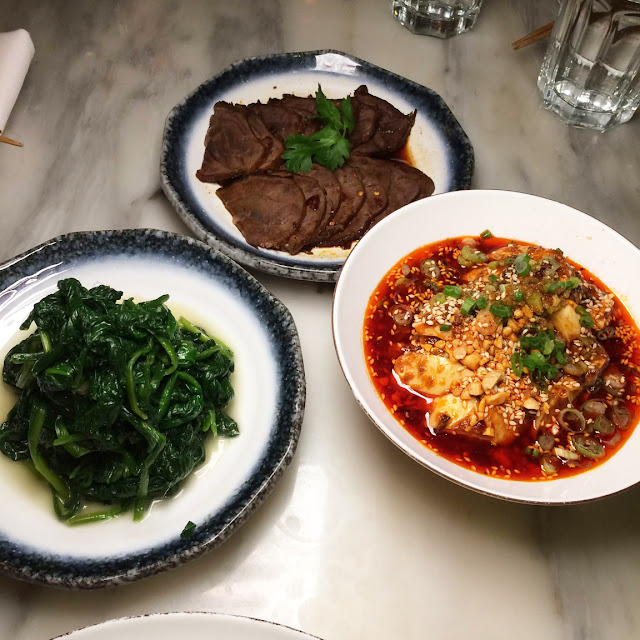 As the restaurant specialized in noodles we ordered two dishes from that category, much to the delight of Mr Minx. The Hand-Pulled Noodles Mixed with Braised Fresh Lamb was rich, yet somehow lighter than the pulled noodles with lamb I have eaten elsewhere. It also contained braised carrots, which I thought was unusual. 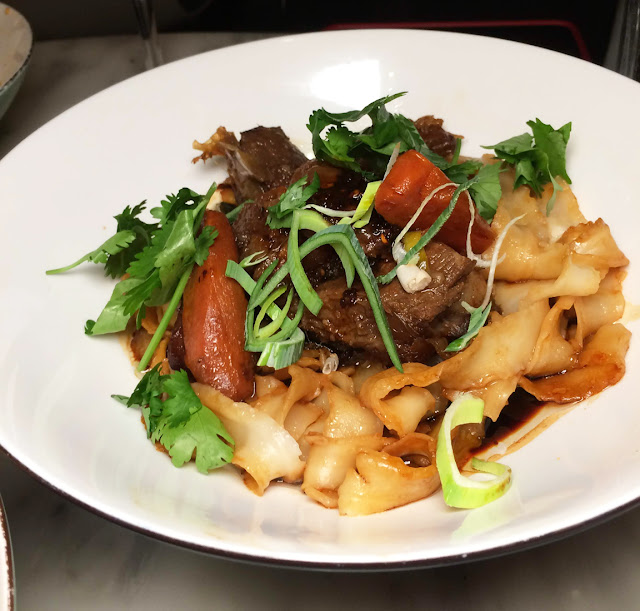 Dan-Dan Noodles involve a spaghetti-like noodle in a dry sauce of ground pork, preserved mustard greens, chili oil, and Sichuan peppercorns, topped with peanuts. I felt the seasoning was well-balanced--spicy but not too, a little sweet, a little numbing--making this best version of the dish I've tried yet. 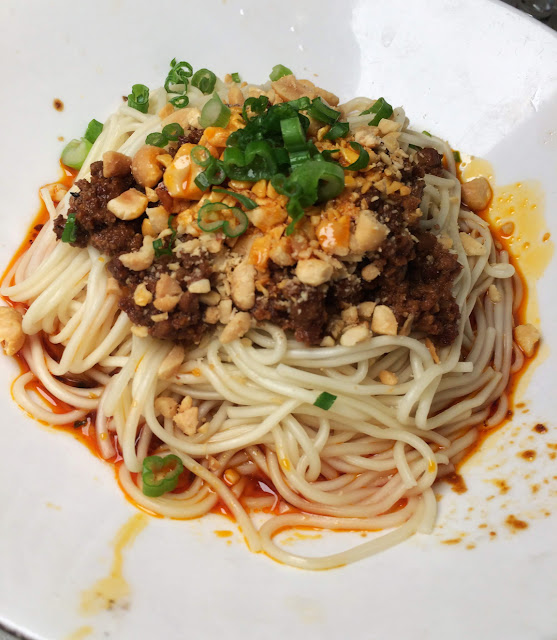 There were still more peanuts on the Crispy Shrimp Saute, along with enormous dried chiles that had been cut into chunks. Nestled within the spicy-looking pile were lightly battered shrimp that were juicy and perfectly crunchy. Along with the familiar flavors of ginger and garlic was rosemary, which combined with the fried peanuts made this dish absolutely addictive. 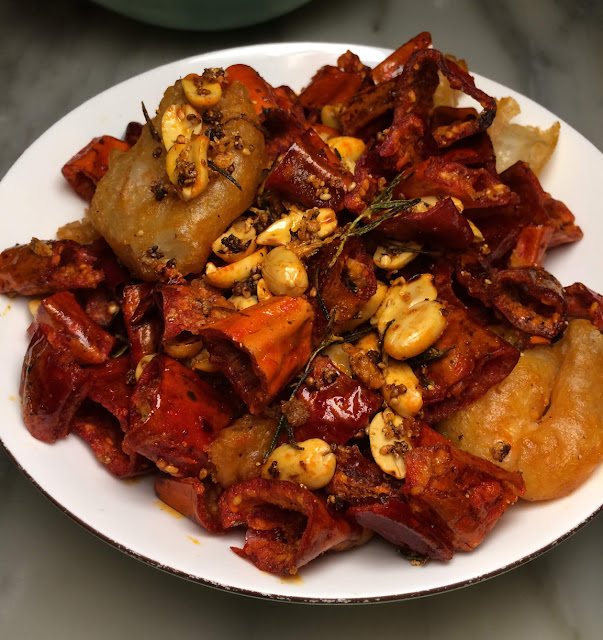 Thought I didn't get to eat at Via Carota--at least not this time--I was pretty happy with our dinner at Hao Noodle that night. First dinner. We had dessert and pizza afterward. More on that in next week's post.