Mr Minx and I are serious eaters. We enjoy a wide variety of foods from all over the world. Asian food is my thing especially. Northern Baltimore County, where we live, isn't exactly a hotbed of good food, and really great Asian food is hard to find. So when we go to New York, we eat as much of it as we can get.

I like to stay in or near Koreatown, in Midtown Manhattan. 32nd Street between 5th Avenue and Broadway in particular is packed with Korean eateries, though there are some outliers on 31st and 33rd and across 5th. One can get bibimbap or barbecue 24/7, and fancy pastries and bubble tea most of the day. On our most recent trip to New York, we ate at two Koreatown restaurants, but also ventured elsewhere in the city for ice cream and pizza.

Our first stop of the trip was for a lunchtime feast of dumplings and noodles at Mandoo Bar. The soft and slippery udon with seafood was mild and soothing; the colorful steamed mandoo were variously filled with vegetables, pork, and seafood. All benefited from the mix-your-own-sauce collection of salty and spicy condiments found on every table. Personally, I prefer the fried mandoo, because I like a little crunch on the somewhat thick wrappers, but the steamed version was satisfying, too. 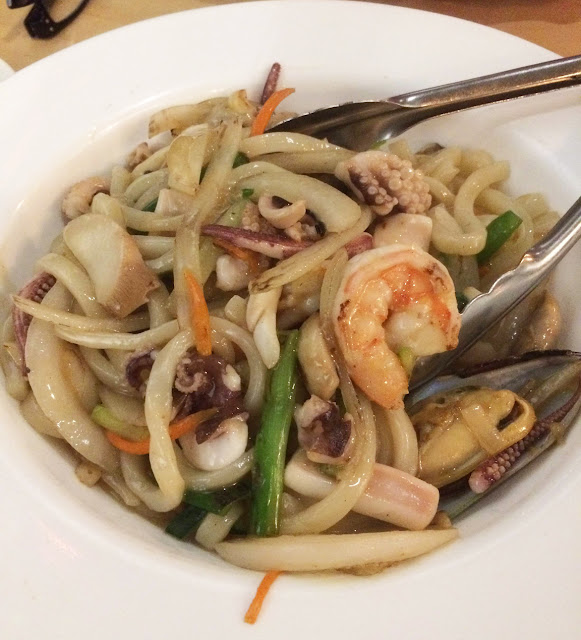 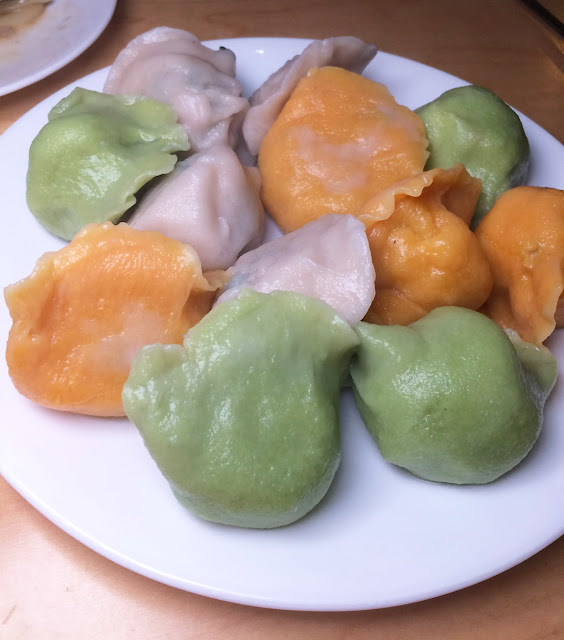 Later that evening, we visited Hao Noodle & Tea, which was written up here last week. Our lovely food tour guide, Daisy, remembered that Morgenstern's ice cream had recently opened a new flagship shop nearby, so we stopped in to sample a few of their 88 occasionally very unusual flavors. 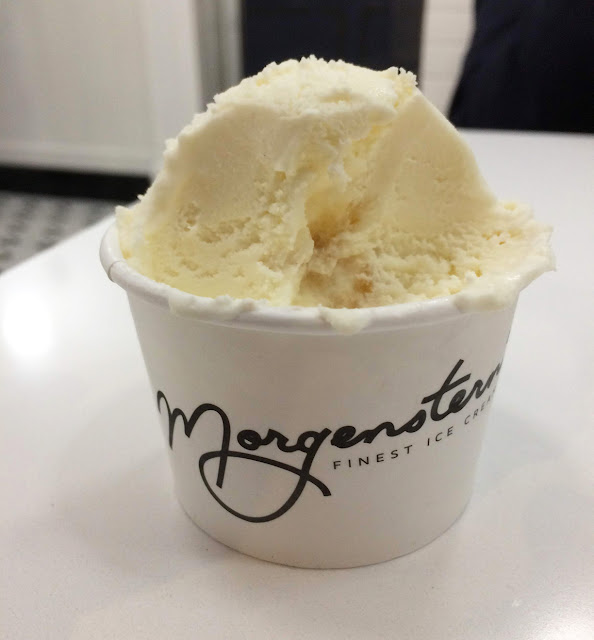 When presented with that many choices, I have trouble making up my mind. I did manage to settle for cardamom lemon jam. The ice cream was strongly cardamom flavored with small pockets of a somewhat bitter lemon marmalade that contrasted nicely with the sweet spice and milky ice cream. Sadly, I didn't take note of what Mr Minx ordered, but he seemed to enjoy his flavors which likely involved chocolate. Daisy had a date-flavored concoction that was neither ice cream nor sorbet, with an odd grainy texture, that was saved by a dose of a very good hot fudge sauce.

After Morgenstern's, we trudged through the rain to Joe's Pizza, a slice joint on Carmine near Bleecker. Mr Minx, a proponent of NY-style pizza, really enjoyed the perfection of Joe's thin crust that audibly cracked when being folded. It's truly one of the best slices in town, relatively cheap and satisfying, too.

The next morning, after lattes at Starbucks (I know, but it was Sunday, they were open, and they are if nothing else, consistent), we walked the ten or so blocks to Bryant Park to check out the Bank of America Winter Village. The rain had stopped, but the clouds lingered. Still, it was a lovely winter day. We window shopped up and down the maze of tiny boutiques until we made a decision about food. Mr Bing was our first choice. 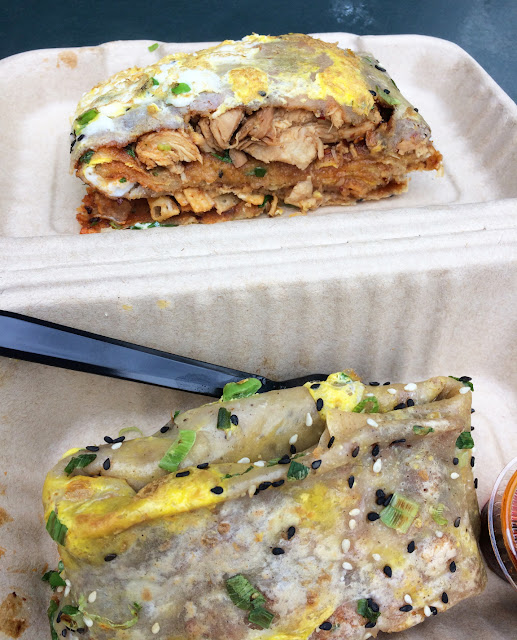 A few years ago, I saw Mr Bing at Urbanspace Vanderbilt. The food court was crowded and most stalls had lines; I found myself overwhelmed by foodie anxiety. Rather than choose something new to me, like bing, I quickly grabbed two tacos at one of the less-busy stalls, scarfed them and escaped the crowds. I resented my decision.

Jianbing is a traditional street food that originated in the north of China. Generally eaten for breakfast, this crepe-like pancake is coated with egg on both sides, smeared with various pastes and sauces, and folded. It can be filled with meat and veg, like our General Tso's bing. It's big enough to share, and fucking delicious. I won't pass up this treat next time. 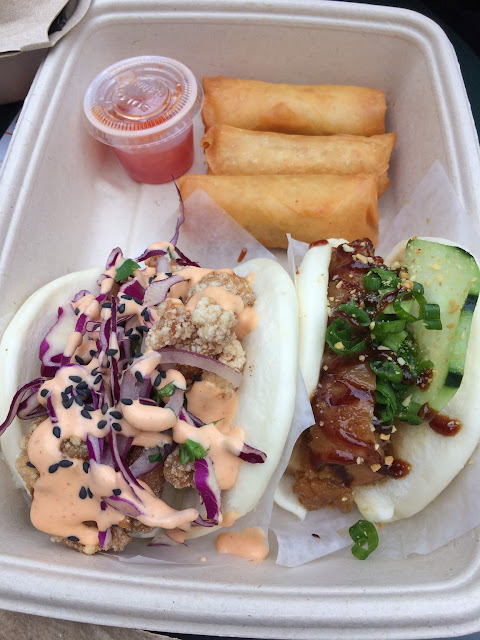 Mian Kitchen was nearby, and we grabbed a couple of bao (fried chicken and pork belly) with a side of spring rolls. I enjoyed the spring rolls, which were piping hot and crispy, but was a little disappointed in the bao. The chicken was on the dry side, and neither were as flavorful as others I've eaten in town. 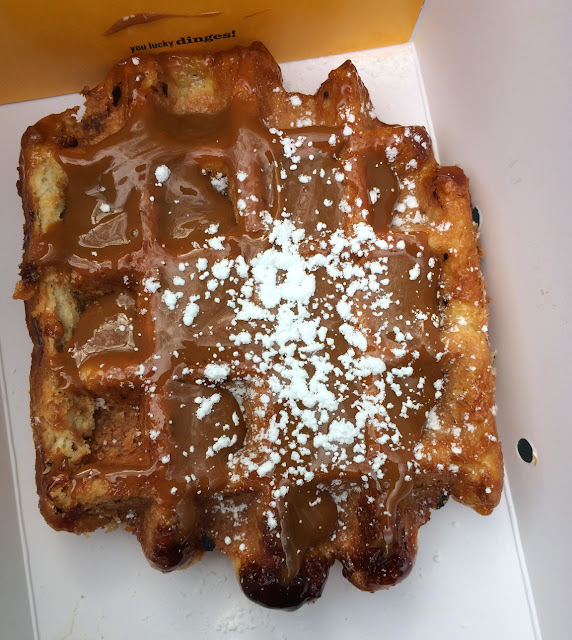 We also tried one of the famed liege waffles from the Waffles & Dinges outpost at Bryant Park. It was good, but I've had better. 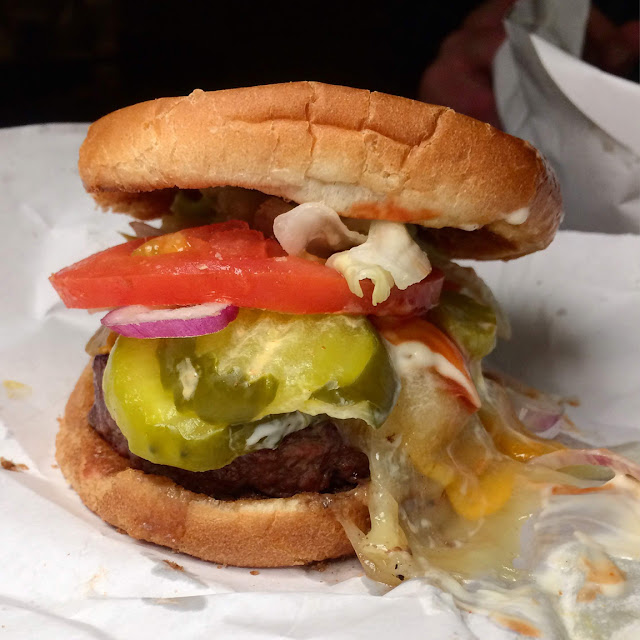 Our plans for the evening involved visiting the tree at Rockefeller Center and checking out department store holiday windows. Barney's was a real bust; they didn't bother decorating at all. Bergdorf's windows were real winners, especially those dressed up with fake confectionery like cakes and gingerbread houses. From BGs we segued to the Parker New York Hotel (formerly the Parker Meridien) to hit up the fabled Burger Joint, a faux "dive" restaurant tucked away behind a curtain next to the hotel's front desk. The ambiance (posters, tons of graffiti on the walls and gouged into wooden tabletops) is very CBGB, but the food is classic Americana--burgers, fries, milkshakes, plus beer and wine.

The burgers were simple and very good, earning every "best burger in NY" accolade received in those glory days before the advent of the now-ubiquitous Shake Shack. 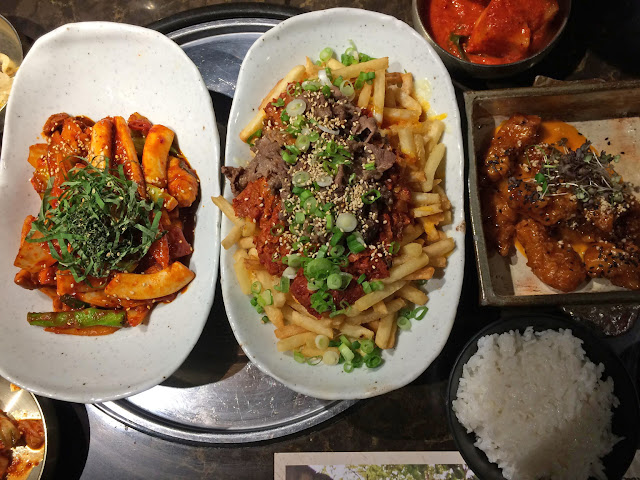 Much later in the evening, we enjoyed our second dinner at Samwon Garden, in Koreatown. Though it was nearly 10pm on a Sunday, most Korean restaurants in the neighborhood were packed, some with lines. Samwon Garden has multiple levels, so we were able to snag a table and order a few of the more interesting non-bbq items on the menu. The Honguh Kangjung, or deep fried skate wings with housemade Buffalo sauce were crunchy and overcooked and doused in a sauce more sweet than spicy (though it was spicy). Osam Bulgogi was another spicy sweet dish, this time with chewy chunks of squid and morsels of pork belly. The show stopper was a dish listed as a "side" - an enormous plate of fries with kimchi, bulgogi, and cheese curds, rather like a Korean poutine. I'm not crazy about fries in general, but I probably ate more than my fair share of this dish. 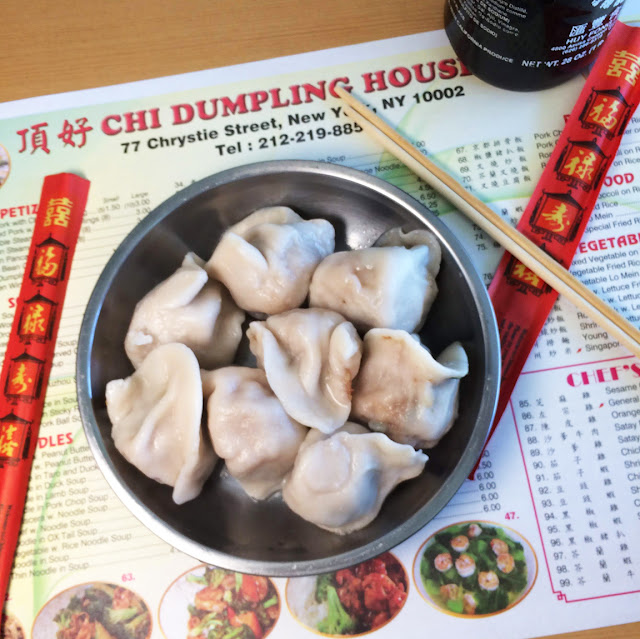 The next morning, we wandered around Chinatown in the chill wind, stopping for a porky plate of steamed dumplings at Chi Dumplings before ice cream at Chinatown Ice Cream Factory. I am endlessly amused that the "regular flavors" at this tiny shop include durian and taro, but the "exotic" flavors include chocolate and vanilla. 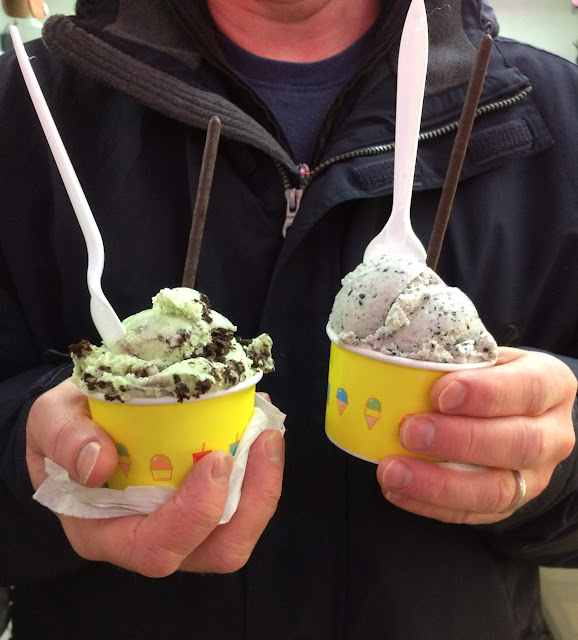 After ice cream came....pizza! I haven't been to that many pizza joints in NYC, but I did realize that one of my favorites, Pomodoro, was not too far away from where we had wandered. We had a quick vodka slice before heading to the Strand to browse through books. 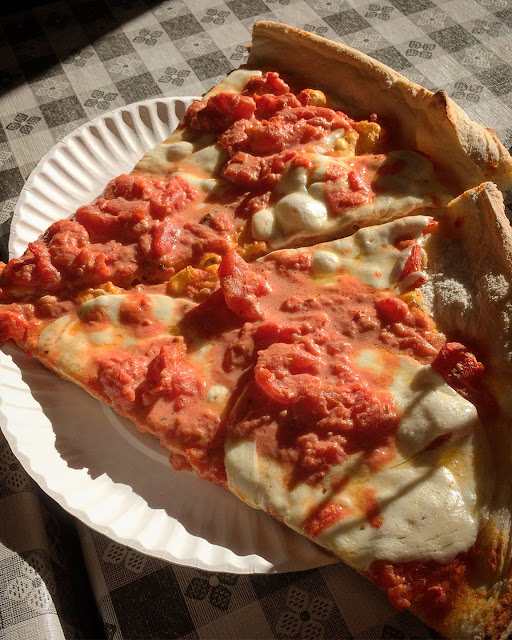 After the Strand, we found ourselves wanting three things: 1) a place to sit; 2) to pee; 3) something warm. We spotted Max Brenner and found everything we ever wanted.

And churros with milk chocolate, caramel, and raspberry dips. Lattes on the side. So good and so welcome. 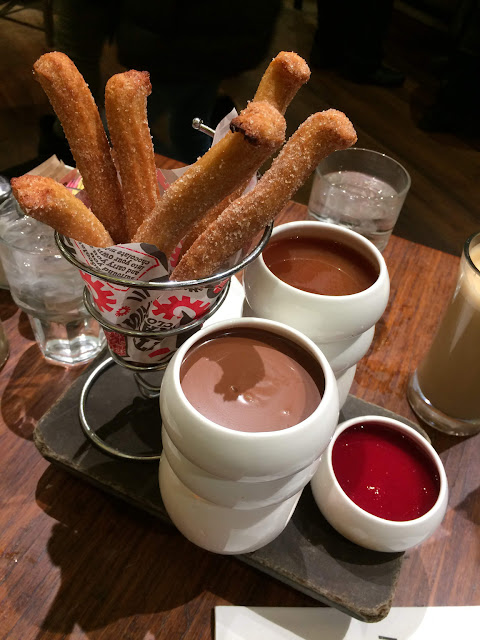 We left the city later that afternoon, full of happy food memories and already planning our next visit.