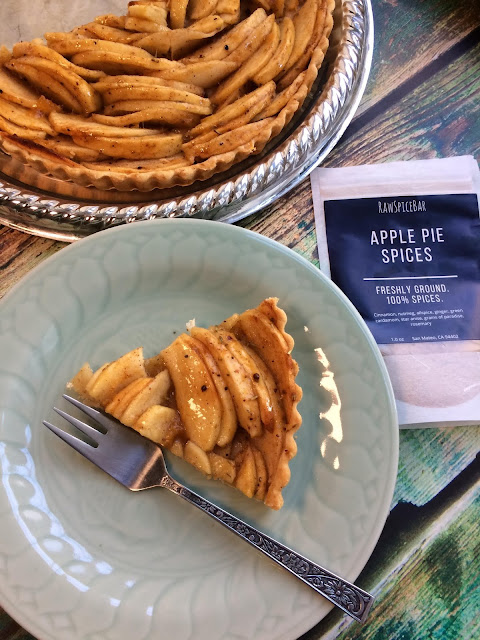 Though I live in the hometown of one of the biggest spice producers in the world, I find myself buying spices online far more often than I buy them in the supermarket. It's not that I don't trust the supermarket brands--I have never had an issue with any of them--it's that I really have no idea how long those spices have been hanging around the store. Especially more exotic items, like star anise or garam masala. How often does the average Giant/Safeway/ShopRite/Wegman's shopper buy something like that, and how often does the store replenish its stock?

There are several really good spice shops online, and I've tried them all. Each has products not available at the others. Some shops have really wide ranges of seasonings, while other shops carry what might be considered more specialty items. RawSpiceBar is in the latter category. While they do sell things that just about everyone has in their spice rack--granulated garlic, cumin, ginger, peppercorns--they also have the more esoteric grains of paradise (a member of the ginger family that's like a citrusy black pepper), sansho peppers (a Japanese cousin of Sichuan peppercorns), and asafoetida (a stinky resin used as a substitute for garlic and onions in some Indian dishes). RawSpiceBar specializes in spice blends, and as with the individual spices, they have both the familiar (poultry seasoning, herbes de Provence, taco seasoning) and the exotic (Ethiopian berbere, Turkish baharat, Indian chaat masala). Rather than use larger jars, RawSpiceBar sells their freshly toasted and ground spices in 1-ounce containers (about 2 tablespoons). With their subscription service, customers can choose to have their supply replenished in 1, 3, or 6 month intervals, so they never really run out, yet the spices are fresh every time.

When RawSpiceBar approached me with samples in exchange for writing about them, I couldn't pass up the opportunity to try another source for seasonings. I was especially interested in the more oddball spice blends, but was happy to take whatever they sent. To be honest, I was a little disappointed to receive a package of apple pie spices. I mean, how interesting is cinnamon, nutmeg, and allspice? Not very. But RawSpiceBar's version of this blend also contains green cardamom, ginger, star anise, grains of paradise, and rosemary. It's a blend that definitely kicks the milquetoast ass of supermarket apple pie spices. It's bold. It's spicy. And it goes fabulously with apple, as I found when I used it in a simple apple tart. But it also works with pumpkin. I made a quick pumpkin butter with leftover canned pumpkin, brown sugar, and a big pinch of RawSpiceBar apple pie spices and pretty much ate the butter straight from the jar with a big spoon.

Thanks to RawSpiceBar for introducing themselves to my pantry. I have a couple more samples that I will be playing with in the future, and then I'm going to order myself some fancy stuff like French vadouvan, Persian advieh, and Japanese curry powder. Yum.

Peel the apples and cut them into quarters. Slice off the core bit and cut each quarter into 4-5 slices. Put in a large bowl and toss with lemon juice, spices, and sugar.

Place the crust into a 10" or 11" tart pan with removable bottom, gently pushing the dough to fill the corrugated sides. Trim excess pastry flush with the top of the pan. Arrange the apple slices in concentric circles within the pastry, making sure to fill in all the gaps with other apple slices. It doesn't have to look neat or perfect; it will still be beautiful.

Bake for 40-50 minutes, until the apples have started to brown and the crust is a nice golden brown. Remove from the oven to a cooling rack and allow the tart to cool for at least 30 minutes.

Warm a few tablespoons of apricot jam in the microwave until it's more liquidy. Brush a thin coating of it over the cooled tart.