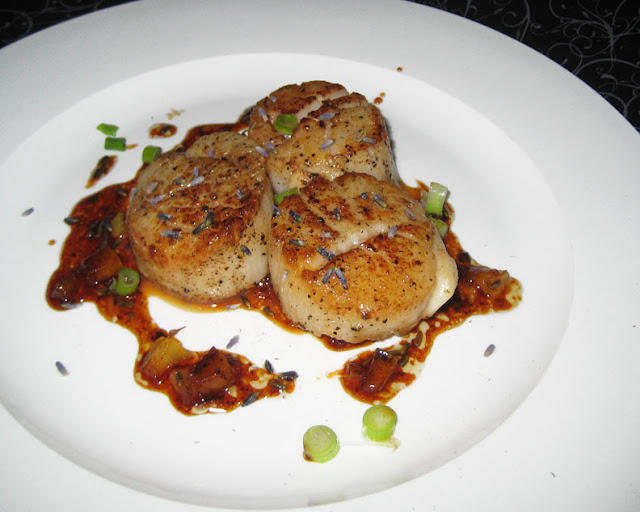 Remember when I complained last month that scallops are the restaurant world's biggest rip-off? Here's some proof. I paid $15.95 per pound for U-10 drypack scallops at the local Giant. U-10 means there are fewer than ten scallops per pound - these three babies weighed .37 lb. ("Drypack" means they were packed and shipped on ice without the use of preservatives. They sear quite nicely and don't leach a lot of moisture into the pan.)

I seared the scallops in a bit of olive oil, removed them from the pan, and turned off the heat. To the still hot pan, I added a tablespoon of butter, a tablespoon of honey, about a teaspoon of dried, food-grade, lavender buds, and a teaspoon of chopped preserved lemon. The honey caramelized almost instantly, creating a rich, lightly sweet sauce for the scallops, which were also garnished with a sprinkle of green onion and a few more lavender buds.

Had I ordered this in a restaurant, it would have cost $35. Cost me around $6 to make at home. And they were damn fine.