I started following @BaltimoreHomeCook on Instagram last year because I enjoy her photos of homemade pasta. Not just linguine and fettuccine, but fancy stuff made with colored doughs in interesting shapes. I admire her experimentation in the kitchen and wish we had enough space for that sort of thing. Our counter is not much bigger than a desk calendar and it already has several bottles of olive oil and a KitchenAid heavy duty stand mixer in permanent residence. Though I have always known that we could make pasta dough in the food processor and hand-form cavatelli or orecchette at the dining room table, we never got around to it.

I met @BaltimoreHomeCook--Laurie--in person and immediately she volunteered to lend us her KitchenAid pasta attachments. The next day, as I accepted the heavy bag holding the roller and cutting blades, I realized we had no more excuses. We'd be making fresh pasta ASAP, as she had also given us a small bag of 00 pasta flour with which to play. Oh boy. This was getting real.

I didn't want to lean on Laurie for everything--I hate being a pain in the ass, or needy--so I looked up pasta recipes on teh innernets. I found one for dough made in the food processor involving 2.5 cups of 00 flour, 4 eggs, and 2 teaspoons of olive oil that seemed easy enough. The directions indicated that half a cup of flour should be held back and added if the mixture seemed too wet. After pulsing the remaining ingredients, the dough felt good to me, so we put the other half cup of flour back into its bag. 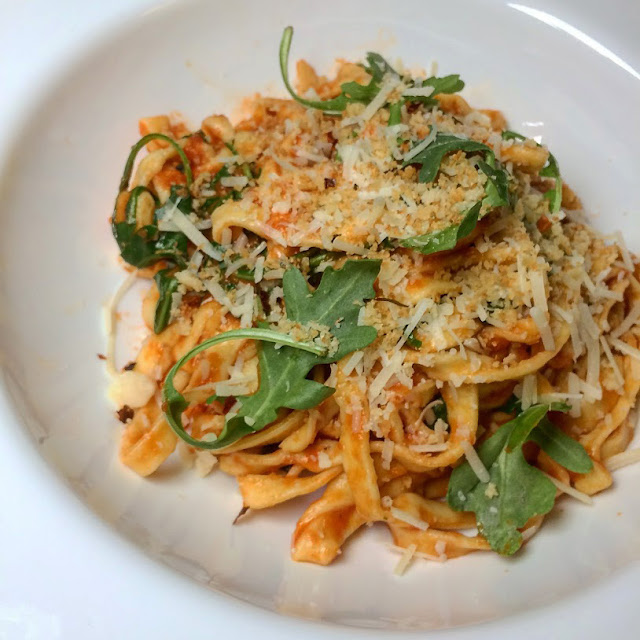 After the pasta dough rested in the fridge for a while, we began the rolling process. I had found a video on YouTube instructing that a blob of dough should be run through the #1 setting several times, folding once before each pass through the roller, and then once through each successively numbered setting all the way to #8. Seemed easy, though looks are usually deceptive.

We ended up putting the pasta through the rollers three times. I broke down the initial 1-pound ball of dough into about 8 smaller sections. As we passed each through the roller, we noticed that it started wrinkling badly at setting #4, becoming a total mess at #5. It happened with each piece of dough, so we tried again, this time stopping at setting #4. I had set out a sheet pan with a piece of parchment paper on which to arrange the sheets, but I hadn't realized that the dough would stick to itself and the other pieces without flouring the sheets. (Duh!) We re-rolled each of the 8 pieces of dough for a third time, this time placing them on a light dusting of cornmeal, which stopped the sticking. More sticking ensued, however, when we cut the sheets into fettuccine, and more cornmeal was employed to keep the strands separate. The whole process was a bit of a hot mess.

We cooked the pasta and tossed it with a simple tomato sauce with arugula, cheese, and breadcrumbs. Because we stopped at the #4 setting, the pasta was too thick and chewy, resembling my Polish grandmother's kluski far more than tender Italian flat pasta. We'd have to try again the following weekend.

I posted the photo above on Instagram, and Laurie complimented me on a successful first try. I told her about our problems and she quickly offered solutions. Our dough was too wet, causing it to wrinkle during the rolling process. She offered her recipe, which was a bit different than the one we had used: 2 cups of flour, 3 eggs, no oil. If made in the foodpro, the mixture should be pulsed to the texture of couscous. If the dough still seemed too wet, we should fold some flour into it while rolling. Also, we should let the rolled dough dry a bit before cutting; the texture should be somewhat leathery. 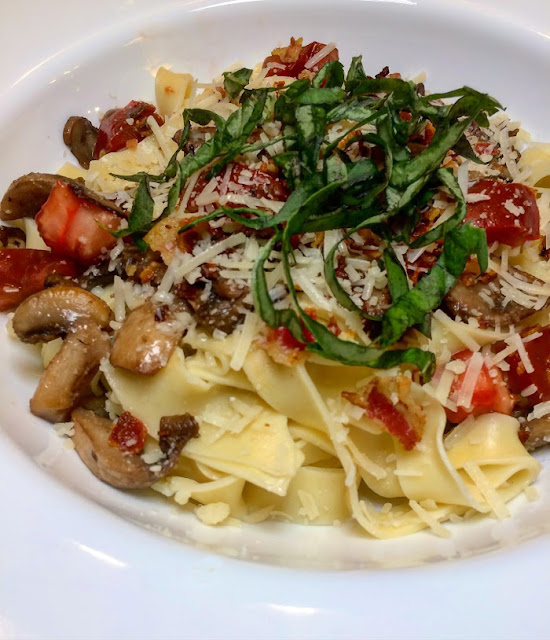 The following weekend, we tried again. We used 2 cups of 00 flour and 3 eggs, which we pulsed to a couscous texture (cooked couscous, I should add). It was a little stiffer and required a bit more kneading, but in a few minutes Mr Minx had worked it into pliability. We let the dough rest in the fridge for about 45 minutes before we rolled it out. It still wrinkled a tad at #5, but we soon realized that the dough needed to be held a bit more tautly at the top as it was being pulled down through the roller. Mr Minx was better at it than I was, so he manipulated the dough while I was in charge of changing the levels on the roller attachment. In no time, we had nine beautiful sheets of very thin dough that were laid atop tea towels on baking sheets.

I had a hair appointment in Hampden, so we covered the dough with parchment and left the house. I figured we'd be back in a bit over an hour, as my hair is very short and takes little time to cut. I didn't take in consideration that there are several levels of "leatheriness" and perhaps Laurie meant the pasta should dry only slightly, to the texture of a supple glove leather. As it turned out, a late arrival before me kept me waiting 30 minutes before my turn in the barber chair. When we arrived home, our beautiful pasta had become more like stiff saddle leather. Not knowing the difference at that point, we unsuccessfully attempted to feed the sheets of dough through the pasta cutting blades, which only crumbled them into uneven bits. Not wanting to waste our efforts, I stacked the stiff sheets and sliced them into pappardelle with a sharp knife. To be honest, wide flat pasta is my favorite anyway.

This thinner pasta cooked much quickly than the thicker stuff we had made the week before, and, despite our issues, was lovely. Not in looks perhaps, because the noodles were of varying widths, but the texture was amazingly silky, with the barest al dente bite. This time, we served it with pancetta and mushrooms, chopped raw tomato, fresh basil, and grated Parm.

The third time's the charm, as they say, so we figured trying it once more would result in perfection. I followed Laurie's recipe again, but the dough seemed stiffer and drier this time. I didn't want to add water in case I accidentally overdid it, so kneaded the dough a little longer before tucking it into the fridge for half an hour. 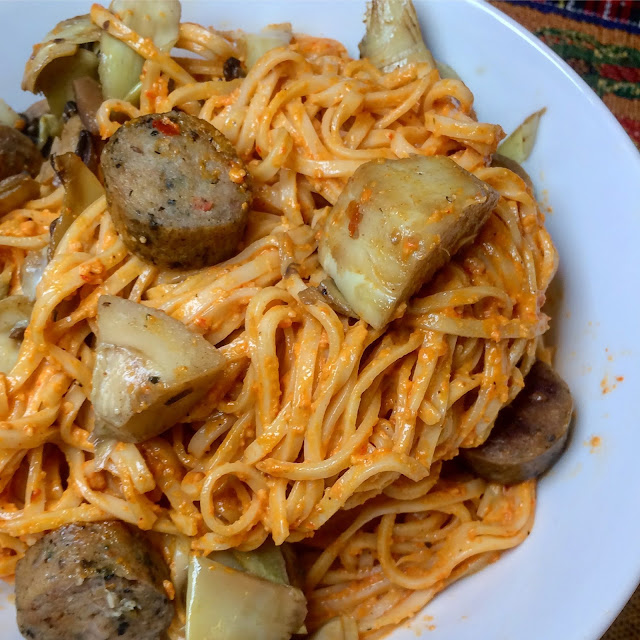 It rolled out beautifully, but dried too quickly. We had to cut the first sheet of dough immediately after rolling the final sheet. It was almost too dry, but not as brittle as the last time. The final product, however, was lovely, with a silky texture and a gentle bite. Tossed with red pepper walnut pesto, artichoke hearts, and Italian chicken sausage, it was fabulous.

Our next pasta adventure will be with semolina dough, which requires water instead of eggs. We've already purchased the semolina flour so we won't have excuses not to try something new. But I have to admit, even though fresh pasta is amazing, it is a real pain in the ass to make. Kudos to Laurie and to everyone else who does that stuff on a regular basis. And thanks to the manufacturers of dry pasta, because we'll never stop using it.