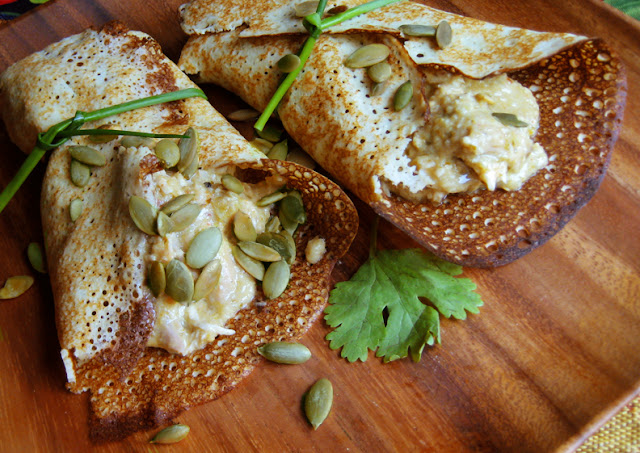 Last month, we purchased a 5-lb bag of masa flour and used a whole two cups of it for this recipe. There was (and is) still plenty left, and I was looking for things to do with it besides making corn tortillas (which I have not yet done as I do not own a tortilla press). While noodling around online, I found a recipe for corn crepes. I love crepes, and they are pretty easy to make, so the next step was to figure out how to fill them.

I consulted a copy of Rick Bayless' Authentic Mexican for ideas (not that I planned to be authentic in the least) and settled on a green chile sauce with chicken. Only I didn't have any fresh chiles and didn't feel like slogging through the humidity to the grocery store to pick some up. I did have cilantro, and canned tomatillos, and why can't a chipotle en adobo stand in for its unsmoked cousin? I also found a can of mild green chiles in the cupboard, and threw those in too.

Since I was making crepes, which seem somewhat fancy, I figured I might as well make the presentation as elegant as possible, hence the chive garter. Fancy or no, they tasted muy bueno.

Add chicken to prepared enchilada sauce and cook over low heat until warmed through.

If crepes have been refrigerated, allow them to sit at room temperature for an hour or so. Place a few tablespoons of the chicken mixture in the middle of a crepe. Fold up the bottom, then fold the sides over diagonally, so the crepe is fan-shaped and the chicken mixture can be seen through the wide end. Slip a chive under the middle of the crepe and tie it in a knot to hold the crepe closed. Trim the chives to a reasonable length.

Pour all the ingredients into a blender and blend until well combined.

Place a bit of butter in a non-stick skillet and heat to medium-high. Ladle in some batter, swirling the pan to spread into a thin layer. Cook until the top looks dry and the edges are brown. Flip and cook the other side for about 45 seconds. One side will be much darker than the other. Repeat for the rest of the batter, omitting the buttering of the pan (the batter has plenty of butter in it). Keep crepes separated with sheets of waxed paper. Cover finished crepes with plastic wrap and refrigerate until ready to use, up to overnight.

Makes about 10 8" crepes, depending on how many you mess up. (The first two are almost always casualties until you get the hang of it.)

Drain tomatillos and place them in the jar of a blender along with the chiles, onion, cilantro, garlic, and chipotle. Blend to a puree.

Heat the cooking oil in a sauce pot until a drop of puree sizzles madly. Pour in the tomatillo mixture and cook, stirring occasionally, until the mixture darkens and begins to reduce, about 5 minutes. Turn the heat down to medium and add the cup of chicken stock. Simmer for about 15 minutes. Stir in sour cream.