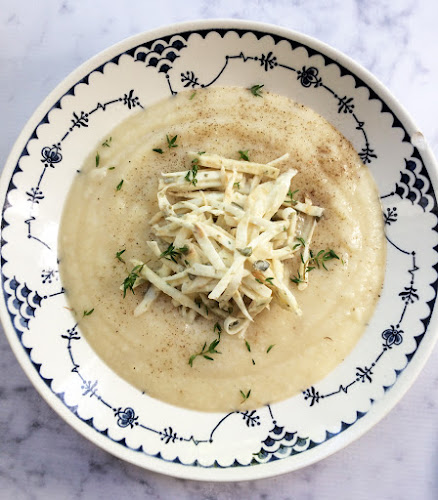 In the summer, I love making cold soups - just toss a bunch of stuff in a blender, add stock if it's not already liquidy, and refrigerate. So easy. Gazpacho is my fave; it takes no time at all if I'm really lazy because I'll used canned tomatoes and jarred roasted red peppers. But woman does not live by gazpacho alone. Sometimes the farmers' market (or grocery store) has other interesting veg on offer, like celery root.

I love celery root, or celeriac, both raw and cooked. I use it raw in a salad like celeri remoulade, and I always roast it as part of a Thanksgiving side dish. For this dish, I used it two ways, both raw and cooked--very Fine Young Cannibals of me. (Despite the cannibal reference, it's completely vegetarian and can be made vegan as well.) I thought my concoction was reminiscent of vichyssoise, the classic French chilled potato soup, but with the twist of celery root. Also, regular onion was used in place of the traditional leeks, but you could certainly substitute 2-3 leeks if you prefer.

I can't not make a bit of celeri remoulade if I have a celery root. The flavor is hard to describe, but I'm crazy about it. Celery root tastes somewhat like celery, very aromatic, but has a texture closer to a carrot or parsnip. Sliced thinly and combined with a mustardy remoulade sauce with lots of tangy capers, it's great as a substitute for cole slaw with dishes like bbq or crab cakes. And it added much-needed texture to the pureed soup. Even if you don't like celery (it's not my fave) you might enjoy celery root, so I say it's definitely worth trying if you see it somewhere.

Peel the celery root. Thinly slice about 1/4 of the root and cut the slices into matchsticks and set aside. Cut the remaining root into 1" chunks.

Put the chunks of celery root, along with the potato and onion, in a large saucepan. Add the stock and milk and the bay leaf and bring mixture to a boil. Once it boils, turn the heat to a simmer. Watch the pot so it does not boil over and cook the potatoes and celery root until tender. Remove from the heat and allow to cool for about 15 minutes.

Remove the bay leaf from the pot and add about half of the potato/celery root/milk mixture to the jar of a blender (do not fill all the way). Remove the stopper from the blender lid and place a folded tea towel on top. Hold the towel down tightly over the opening and start the blender on the lowest speed. If the mixture is too hot, it will shoot out the top of the blender, so it's very important to keep a tight grip on the towel. If the mixture is adequately cool, it will blend without exploding. Still, it doesn't hurt to keep your hand on top. Puree the mixture, adding more milk if it's too thick, into a soup-like consistency. You don't want it too runny, nor do you want something resembling mashed potatoes. Pour the puree into a container with a lid and add the remaining potato/celery/milk mixture to the blender. Repeat the steps to puree. Add the new batch of puree to the container with the first batch and stir. Taste for seasoning and add salt and pepper to taste. Refrigerate until cold, at least 2 hours.

While the soup is cooking, put the capers on a cutting board and smash them into a chunky puree with the side of a knife. Make a dressing with the mayo, vinegar, a small dollop of Dijon, and a squeeze of lemon juice. Add the capers. Taste for seasoning and add salt if you need it, but the ingredients are probably salty enough. The dressing should be lightly tangy and taste of capers. Toss with the matchstick cut celery root and refrigerate  until ready to use.

To serve, ladle the soup into serving bowls. Top with a handful of the celery salad, and garnish with the thyme leaves and fresh pepper.