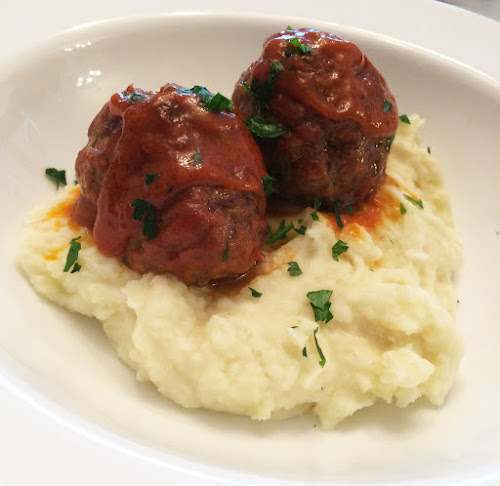 The Minx has been a long time fan of Deb Perelman's Smitten Kitchen blog and recently purchased her cookbook aptly titled, The Smitten Kitchen Cookbook. She had bookmarked several recipes she wanted to play around with and one meatball recipe (or meatloaves as they are referred to in the book) sounded particularly interesting to me. Since I had a day during the week when I couldn't think of anything to make for dinner, Minxy suggested that I attempt this recipe. After all, she had already procured all the necessary ingredients on our last trip to the grocery store. I agreed and, in a break from my usual routine of using a recipe as merely a guide and coming up with my own riff on it, I was determined to cook the dish exactly as it was written in the cookbook.

Well, "best laid plans" and all that! It turned out, we didn't have precisely all the ingredients we needed. The glaze called for four tablespoons of tomato paste and the meatballs needed one tablespoon. I only had three tablespoons in the fridge and no spare can in the pantry. so I substituted two tablespoons of tomato paste and two tablespoons of ketchup in the glaze. Since ketchup already brings sugar and vinegar to the party, I reduced the honey and cider vinegar by half. Oh, actually, the honey in the pantry had solidified, so I replaced honey with agave syrup. The finished product turned out just fine.

Having successfully riffed my way around the glaze, I was totally prepared to make the meatballs exactly as described in the book. Trouble was, because of a peculiar layout choice in the book, three of the meatball ingredients were printed on the following page in a corner by the mashed potato recipe. I didn't notice them until after I had already assembled the balls. Since two of the ingredients were milk and eggs, I thought for sure the meatballs would be dry. Thankfully, they too turned out great.

All I had left to do was make the mashed potatoes. Whoops, I couldn't find buttermilk at the store, so that was out. Also, I thought Ms. Perelman's technique was overly fussy, so I just made mashed potatoes they way I normally do, but keeping the brown butter element since it sounded too delicious to pass up. The mash also turned out just fine, and the brown butter provided an added nuttiness that was quite wonderful.

So here it is: my intended-to-be-faithful-but-actually-not-so-faithful take on the Smitten Kitchen's Meatloaves and Brown Butter Mashed Potatoes.

To make glaze: Mix all the ingredients together in a saucepan. Whisk constantly while bringing to a simmer over medium heat.The glaze should come together in a couple minutes. Put it aside for later.

To make meatballs: Preheat oven to 350 degrees F. Whiz the bread in the food processor until it becomes crumbs and set aside. Roughly chop the onion, garlic, celery, and carrot before adding to the food processor. Pulse it until the vegetables become a finely chopped pulp.

Pour a little olive oil into a skillet and heat for a minute over high heat. Lower the heat to medium and add the vegetable mix. Add salt and pepper and cook, stirring frequently. When the mixture starts to brown, take off the heat and add to a large bowl with the breadcrumbs.

Add the remaining ingredients to the veg and breadcrumbs and mix the ingredients together with your hands. Once everything is incorporated, form twelve similar-sized meatballs. Arrange them in a baking dish, making sure they are evenly separated. Coat each meatball with a thin layer of the glaze. Place in the oven and bake until thoroughly cooked, about 20 minutes (160 to 165 internal temperature).

To brown butter: Melt the butter in a pot over medium-low heat. Stir regularly and keep a close eye on it. Once the milk solids have cooked away and the butter is a clear golden color, the butter will start to brown and take on a nutty aroma. As soon as it starts to brown, take it off the heat so it will not burn. Put aside for later.

To make the mashed potatoes: Peel and dice the potatoes. Place in a medium saucepan and cover the potatoes with cold water. Bring to a boil over high heat. Once boiling, reduce the heat so that it maintains a steady boil without boiling over. Cook the potatoes until they feel tender with a fork, about 15 minutes.

Drain the water. Mash the potatoes with a potato masher. Add the browned butter and milk and incorporate with the potatoes until smooth. Salt and pepper to taste.

To serve: Place a layer of the mashed potatoes on the plate and set two meatballs on top. Drizzle the meatballs with some of the leftover glaze.