The old Hess shoe store on Belvedere Avenue near York Road has been at least four restaurants over the past dozen or so years: Taste, Crush, Shoo Fly, and now Starlite Diner. Crush was my favorite of the bunch and I was very sorry to see it go; I particularly liked Demi, the small plates restaurant on the lower level. Taste was a bit all over the place--sometimes the food was good, and other times not so good. Shoo Fly was Spike Gjerde's attempt at a diner that had his local-only farm-to-table gimmick. The food was diner-ish, but prices were high and sometimes patrons want a damn lemon wheel for their cocktail. Shoo Fly didn't attract the hoi palloi, something at which Starlite Diner seems to be more successful. On the Saturday evening we were there, the place was fairly busy. Not hopping, as it was only 5pm, but more people came in as the night went on.

The decor is bright and funky, like a restaurant from the Jetsons rather than the streamlined chrome-tastic look sported by most other local diners. Starlite offers breakfast all day, such things as huevos rancheros and Oreo pancakes, plus a lunch and dinner menu full of trendy items like brussels sprouts and sliders with a couple of brief nods to diner food in the form of meatloaf and a roasted turkey sandwich.

Our party of four tried three apps, three items from the dinner menu, and one breakfast item. 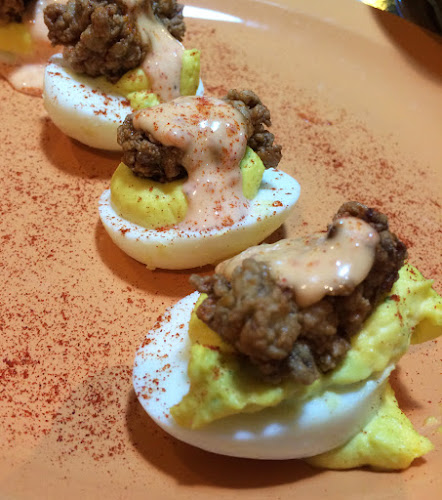 Devils on Horseback is a fine retro appetizer. Ordinarily they're a play on Angels on Horseback, or oysters wrapped in bacon, substituting a dried fruit--like dates--for the oysters. At Starlite, they're a bit confused: deviled eggs topped with a fried oyster and a dollop of pimento aioli. They were...ok. The egg filling was a bit stiff for my taste, and the oysters overcooked. Potentially very good, however, and maybe they are on other nights. 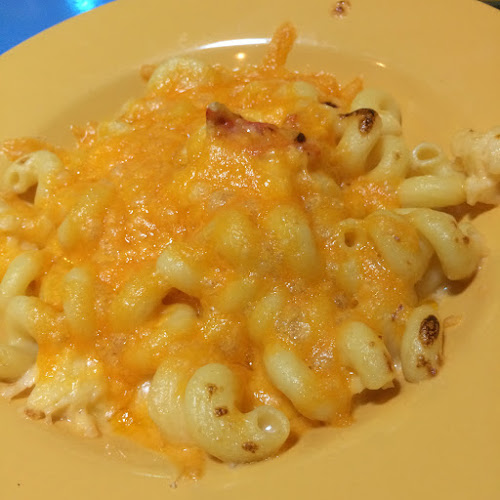 This is the lobster mac and cheese. The lobster mac at Crush was probably the best version of that luxurious now-classic that I've ever tasted. Starlite's lobster mac was....meh. I liked the use of cavatappi, but prefer a saucier mac, and I really don't like my mac blanketed in stiff melted cheese. The screaming yellow cheese on the bright yellow plate was not appealing. A garnish of finely chopped parsley or green onion would go a long way to make the dish more attractive. 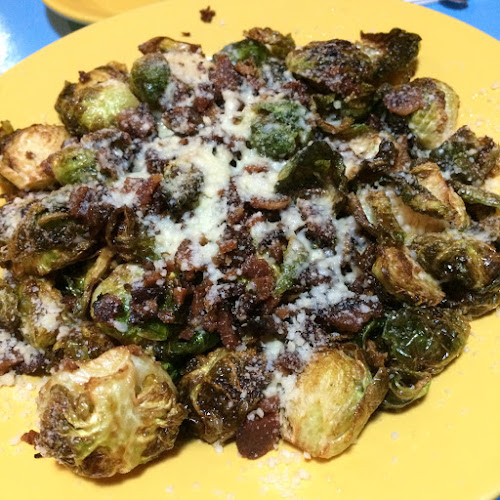 The fried brussels sprouts with bacon bits and a shower of finely grated Parmesan cheese was more successful. I can't rave over them, but I can't complain at all, either. 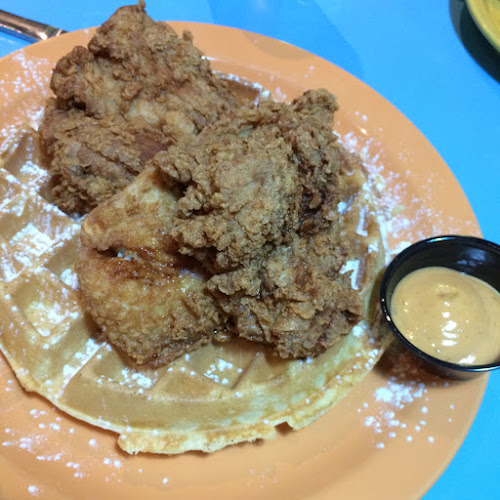 The breakfast item we tried was suitable for dinner - chicken and waffles. Three pieces of boneless fried chicken, both white and dark meat, were served over a fluffy Belgian-style waffle and came with a side of chipotle aioli. I felt the chicken was a bit bland, but it was nicely crispy. My biggest complaint (and you knew there'd be something) was the syrup. While Mrs Butterworth's/Log Cabin was fine in my youth (because I didn't know that their fenugreek flavoring really doesn't taste like maple at all) I wanted the real deal. I suppose I am spoiled. 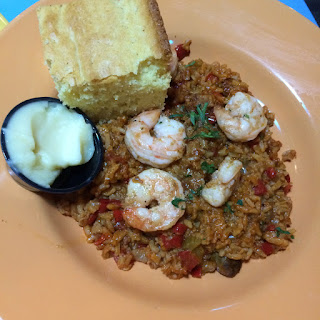 Mr Minx ordered the shrimp and sausage jambalaya, which came with a chunk of cornbread and a shit-ton of butter (presumably for the cornbread). I detected cumin, which made the dish seem more like Mexican rice than jambalaya. But I suppose we're not in New Orleans. <sigh> 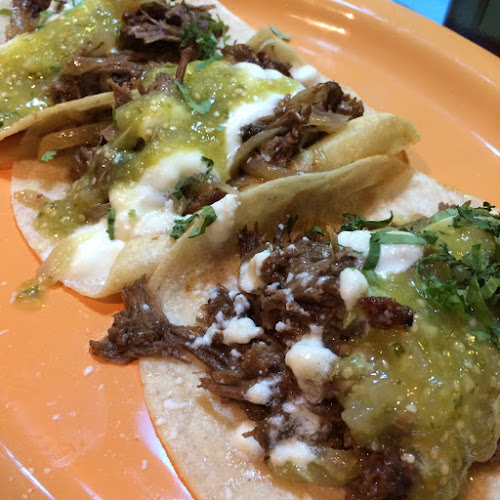 I had the short rib tacos. They were chock-full of tender shredded meat, tomatillo salsa, and queso fresco. They tasted pretty good, but were messy to eat. Perhaps doubling the corn tortillas so they don't fall apart would help. (It would.) The tacos came with a side salad, which I loved--a simple mix of baby greens with a bit of feta and a light toss in the slightly sweet house vinaigrette. 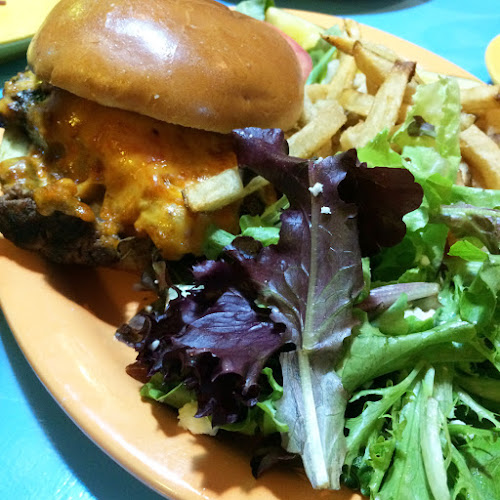 More of that salad and a side of crispy fries came with the pimento cheeseburger. I thought this was the best dish of the night. The 8oz Angus patty was nicely pink on the inside, with a terrific charbroiled flavor. It was topped with a house-made pimento cheese of cheddar flavored with bacon, onion, and chipotle peppers.

We had ordered a lot of food, so we declined dessert from the display of cheesecakes and whatnot from the case near the front door.

The prices are right at Starlite Diner, at least for the food. The most expensive items on the menu both involve steak; a 12oz strip with frites is $24, and a 10oz strip with eggs, home fries, and a salad is $20. There's also a lobster club for $18. The rest of the menu averages $10-$12, depending on whether it's a breakfast or dinner item. The $3 Natty Boh draft seemed a steal, especially when compared to the cocktails. We tried the Vega ($11) and the Bellatrix ($9). While both were made with quality spirits, the alcohol was quite diluted by other ingredients and neither drink packed any sort of punch.

Service is....ok. It's not bad, but it's not good, either. The person who led us to our seats gave us regular menus, but not the drink menu. Our waiter filled water glasses then left. After a somewhat long wait, he returned to take our drink order, but as we had not received those most important menus, we spent more time waiting while he returned with them, and then again for him to come back to take our order. Later, our entrees arrived while we were still eating our appetizers. This was a problem noted in Suzanne Loudermilk's Sun review in early November and was still an issue in early December.

While I think Starlite will be more successful than its predecessors in that particular location, it didn't quite satisfy any of our dining needs. It should, however, be popular with young families (there's a kids' menu, and the decor is fun) and folks in search of a good burger (who aren't into Clark Burger for whatever reason).