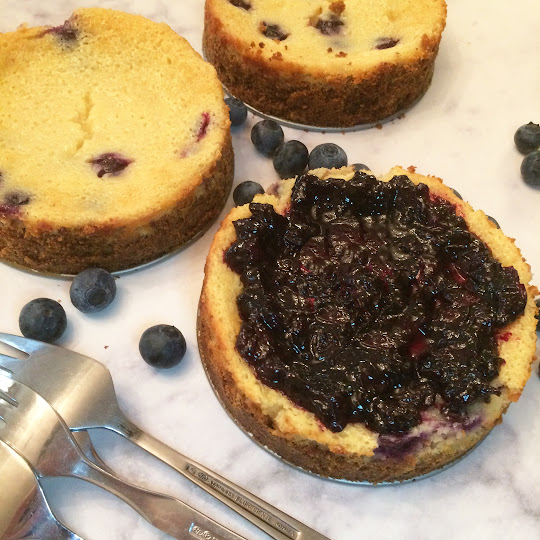 I have experienced quite a bit of disappointment recently. Our latest book, Maryland's Chesapeake, which took nearly a year to research and write, hasn't yet found an audience. The recent election has me facing the five stages of grief; I fear I will be stuck in the fourth stage - depression - for most of the next few years. Friends and family have let me down. Christmas is right around the corner, and as a childless adult, I wonder why I bother celebrating it at all.

Despite all the shit, life goes on. It must. I cannot allow myself to wallow. After all, there is cheesecake to eat!

The cheesecake in question is itself the result of another recent disappointment. I had tried to recreate Starbucks' Cranberry Bliss Bars at home. They seemed like underbaked blondies with cream cheese frosting and dried cranberries - how difficult could they be? As with many things in life, more difficult than anticipated.

I did consult some other "copycat" recipes on the Internet before proceeding. While some were merely cut-and-paste copies of the same recipe offered without credit to the original author, others had little differences, like adding ginger to the frosting. I decided to go ahead with my own relatively plain concoction, adding dried, juice-sweetened, organic cranberries (which are not the bright red of Starbucks' berries) and white chocolate chips to a straightforward blondie batter (essentially Toll House cookies, without the semi-sweet chips). After 20 minutes in the oven, I realized that underbaked blondies will just be gooey blobs of dough. Baked for the proper amount of time, they'll be too chewy, and crusty on the edges to boot. In any case, I pressed on, making a cream cheese frosting while the bars were baking. It's a simple enough process - just beat a couple cups of powdered sugar into cream cheese and butter and add a touch of vanilla. Voila! - frosting.

Once the bars were cooked and cooled, I topped them with some of the frosting and a sprinkle of cranberries. And then I did a taste test.

They were diabetes in bar form.

The cookies were too sweet, the white chocolate chips were completely unnecessary, and the frosting make them even sweeter. They were a disaster. Disgusted, I scraped the frosting off the bars and into a container with the extra frosting (there was quite a bit left over) and put it in the fridge. The scraped bars were still too sweet, but we managed to finish them off. But lesson learned: never again will I put white chocolate chips into an already sugar-laden bar cookie (unless I am making these).

I wasn't in the mood/didn't have time to make a cake for the cream cheese frosting, which languished in the fridge for an entire week, unloved and getting in the way. However, I did realize that it was just a couple ingredients away from a cheesecake batter. So the following weekend I pulled it out of the fridge, whisked in eggs, more vanilla, a bit of lemon, and some milk. We had blueberries, so I tossed in a handful of those as well. While it was in the oven, I made a little blueberry sauce for the top.

Damn if they weren't just fine. More custardy than cheesy, which is the way I prefer my cheesecake, they were surprisingly not too sweet, considering the source material.

I guess you want a recipe. It's kinda hard to give one, but cheesecake is one of those baked goods that isn't an absolute science, so just make it work, like I did.

Blueberry Cheesecake
I used three 4-inch springform pans and the maximum amount of crust materials. If you want thinner cheesecakes, or just like round numbers, use four pans.

Combine the crumbs and butter in a bowl until crumbs are well-coated. Press firmly into three or four 4-inch mini springform pans so they cover the bottom and go up the sides a bit. Bake for 10 minutes. Remove to a cooling rack.

Put the frosting in a large bowl. Whisk in the eggs, vanilla, lemon, a pinch of salt, and enough milk to make a pancake-batter consistency. Toss in a handful of blueberries, if you're so inclined, but they're not absolutely necessary. Spoon batter into pre-baked crusts and bake until puffed and set (they may jiggle a wee bit in the centers, but shouldn't be wet), 30-35 minutes.

Cool cheesecakes on a rack. After about 15 minutes, use a sharp knife to loosen them from the sides of the pan, then gently remove the pan sides.

While cheesecakes are cooling, make the topping. Add a couple handfuls of blueberries to a saucepan with about 1/4 cup of granulated sugar. Add a pinch of salt and some lemon and/or cinnamon, if desired. Cook over medium heat until thickened, 15-20 minutes. Allow to cool before spooning over cooled cheesecakes.