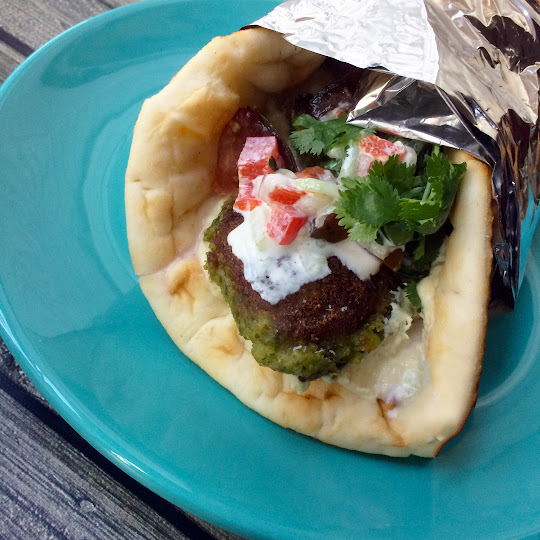 I love falafel, I really do. But.... I hate to say that I am "allergic" to pulses like chickpeas/garbanzo beans and lentils, but they do make me very sick, so I guess that counts. And chickpeas are so in right now. Some bars serve them crisped and spiced in place of peanuts, and they are all over the place in Middle Eastern food. Thank goodness really yummy hummus can be made from pretty much any kind of bean (believe me, I've made most of them), because otherwise I'd be missing out on a really fab and simple dish. Falafel is another thing entirely. It's really difficult to make good, fluffy, falafel with beans. Traditional recipes call for soaked--but still raw--chickpeas. I'm not sure that beans like black beans or cannellini beans can be used raw like that. At least, I've never found a recipe that calls for soaked raw beans. Every non-garbanzo falafel recipe I've seen calls for cooked or canned, and I'm not about to torture my digestive system by experimenting with a recipe using raw beans. I may as well just eat garbanzos.

So what to do when I want to eat falafel? Use canned beans. (sigh)

Mr Minx bought some fresh green beans and I thought perhaps they could add the necessary texture and green flavor to non-garbanzo falafel. They're fine to eat raw, so I whizzed them up in the food pro, added a can of white beans, cumin, lots of herbs. They made a pretty green dough that tasted great, and pan frying little patties of the mixture made something that tasted fairly akin to falafel. They were a little softer, yes, but that was to be expected. In a pita with cucumber sauce, they were terrific. I am not a fan of pocket pitas - the ones in the grocery store always seem stale, and the pockets seldom cooperate and rip in inconvenient places. So I used puffy Greek-style pitas. You may use whatever you want. Slider buns would work fine, too. Or make them hamburger-sized and eat them like veggie burgers. 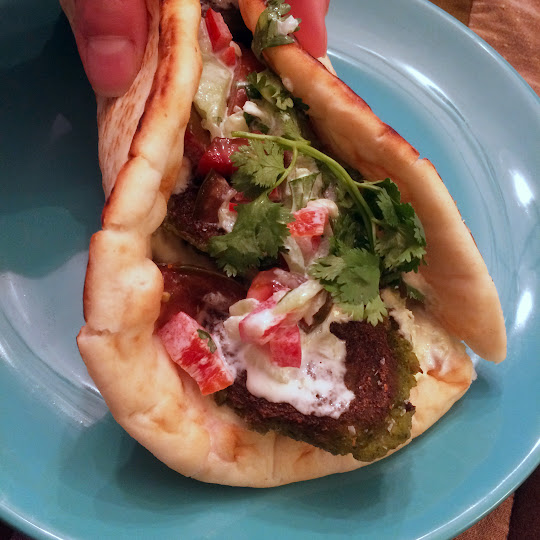 To serve:
Pocket or Greek pitas
Chopped tomato
Hummus, if you like (I used edamame hummus)
Cilantro

To make falafel: Place the green beans in the bowl of a food processor and process until finely chopped but with some texture remaining. Remove and set aside. Add the cannellinis, scallions, herbs, garlic, salt, and cumin to the food processor and pulse until well combined but not pureed. The mixture will be quite wet. Add the baking powder and the flour and pulse until combined. Add the panko a bit at a time and pulse, until the mixture seems dough-like. Fold in the green beans. Scrape into a bowl and refrigerate, covered, for several hours.

Form dough into small patties. (The dough will be somewhat sticky; don't worry if they're not perfect). Heat several tablespoons of oil in a large skillet. Add patties a few at a time and cook on both sides until golden brown. Drain on paper towel-lined plates. Add a bit of salt while they are still warm.

To make the sauce: Peel the cucumber. Shred it with a mandoline or box grater. Put the shredded cuke on a tea towel and squeeze the moisture out over the sink. Place cucumber in a medium bowl and add the yogurt and the red pepper and stir well to combine. Stir in the salt and cumin. Cover bowl and refrigerate until ready to use.

To serve: Pile a few falafel patties on a pita. Top with tomatoes, cucumber sauce, hummus, and cilantro. Serves 4-6.