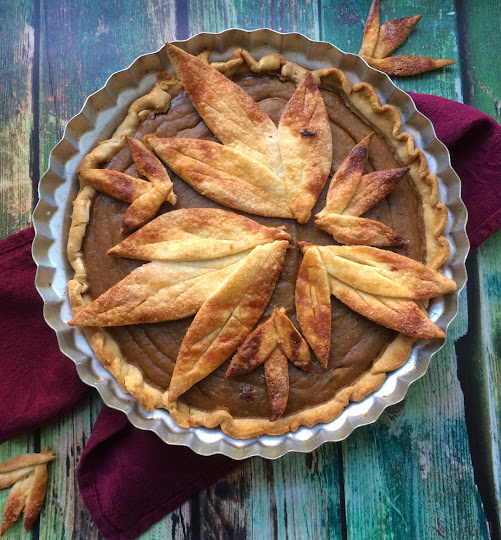 I was recently reminded why we buy our holiday pies, rather than bake them at home.

Recently, I purchased a copy of The Splendid Table's How to Eat Weekends: New Recipes, Stories, and Opinions from Public Radio's Award-Winning Food Show. Amazon was offering the Kindle version for $1.99, and I couldn't pass it up. Perusing it, I noticed a recipe for "pumpkin" pie made with butternut squash. As it happened, I had at home two medium-sized winter squash looking for an application, and this recipe seemed like a perfect fit. I also had a box of pie crusts in the fridge, because I'm too lazy we don't have enough counter space to deal with rolling out a crust.

The problem with those refrigerated pie crusts is that they're not quite big enough for my pie pan. They just barely reach the top, and shrink miserably when I blind bake them. Oh well. I use them anyway because of the counter situation. Also because until very recently, we didn't own a rolling pin. (After 16 years of happy rolling pin-free domesticity, Mr Minx decided that we needed one. And so we now have one. Maybe some day we shall use it.)

Anyway...back to the recipe. And why we don't make pumpkin pies from scratch.

Canned pumpkin (or butternut squash, as it were, masquerading as pumpkin) is really such a time-saver. An ultimate convenience food. Pre-cooked and pre-pureed, it just needs to be plopped into whatever pie, soup, quickbread or other dish requires its earthy presence. Making squash puree at home, however, takes a bit more effort and lots more time. The squash needs to be halved (which requires a large, sharp knife. If you don't have a chef's knife (we have several, thankfully, and a Chinese cleaver, just in case), be prepared to struggle a bit. Once split, a squash needs to be de-seeded, oiled, and baked at high temperature for 45 minutes to an hour to soften the flesh to a scoopable texture. The baked squash then needs time to cool a bit; this is important, otherwise fingers are burnt. The scooped-out flesh then needs to be pureed, which means dragging out the food processor or blender, whichever is the least amount of trouble (or in our case, already lives on the counter). Then the food processor (or blender) needs to be cleaned and returned to its cupboard, not to mention the baking sheet and whatever utensils were used to remove the squash's caramelized flesh from its now-sagging carapace. At this point, two or more hours later, the squash is ready to pie-ify.

I was so glad to have the pie crusts on hand. That was at least one thing that was simple and quick in this whole pie-making project. Except I decided make more work for myself by using one of the two crusts included in the box as decoration. I cut vaguely leaf-shaped pieces and placed them on a separate baking sheet, brushed them with a bit of egg yolk (almost-clever tip: there's usually enough yolk left clinging to the bowl in which they were beaten to glaze a few bits and bobs of pastry) and a sprinkle of granulated sugar, and baked them alongside the pie once the oven temperature was lowered. 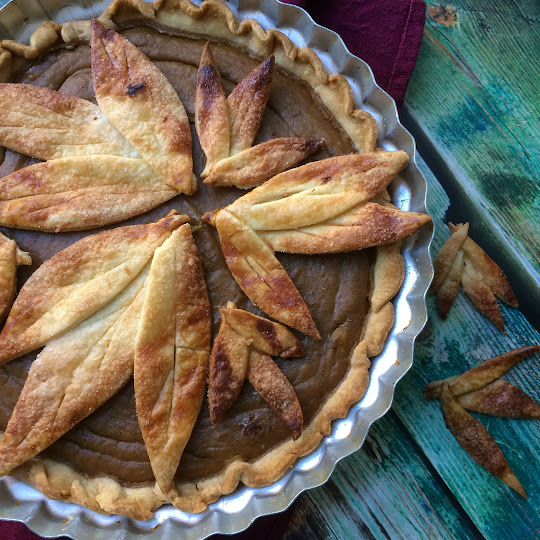 I used a delicata squash and a Thelma Sanders acorn squash, both of which had fairly pale flesh. The combination of sweet spices + pale yellow squash makes for a somewhat grayish-brown filling (which looks much better when covered up with fancy pastry shapes). It still tastes good, however, much like the more orange butternut squash called for in the original recipe. (Raw butternut squash is a real bitch to cut in half though - you are forewarned.)

If you're up for the task of making a pumpkin pie for Thanksgiving next week, here's the recipe, with my alterations. Or you could just go to your favorite bakery and purchase one, like I plan to do.

Preheat oven to 400°F and place a rack in the center of the oven. Butter a 10" metal pie pan. Fit one of the crusts into the pan and if there's enough dough there, crimp the edge. Then line with a piece of foil and pie weights (raw rice, beans, or these ceramic thingamabobs) and bake 10 minutes. Carefully remove the foil liner, with a fork pierce the crust in several places, and bake an additional 5 minutes or until dry looking. Remove from the oven and cool completely. Keep at room temperature up to 24 hours.

Roast the squash flesh-side down on an oiled cookie sheet in a 400° oven. Bake one hour, or until a knife slips easily into the thickest part of the squash. They should be extremely tender. Cool, then scoop out the squash and puree it completely. You should end up with 3-1/2 to 3-3/4 cups puree.

To make the pie, have the oven at 400°F. In a large bowl, beat together the squash, sugar, salt, spices, vanilla, yogurt, and milk until smooth. Taste for sweetness and spiciness, adding more sugar and/or spices if needed. Beat the eggs in a separate bowl, then add to the squash mixture.

Pour the filling into the baked pie shell. If your shell shrunk, as did mine, only fill it to the top of the shell, not to the top of the pan (duh!). (There will be extra filling - pour it into as many small ramekins as it requires and bake them alongside the pie for about 30 minutes.) Set the pie on a cookie sheet to catch any spills. Bake 15 minutes at 400°, then reduce heat to 325°. Bake another 45 minutes to 1 hour. The pie is done when a knife inserted an inch or more in from the edge comes out nearly clean (the center will still be soft).

If you're feeling crafty, cut shapes out of the second pie crust (most refrigerated crusts come with two per box), brush with the bit of egg yolk clinging to the bowl in which you beat it, and sprinkle with sugar. (If there's no egg yolk left, use milk instead. No use wasting a whole egg for a few bits of crust.) Put in the oven once the temperature is turned down to 325° and bake for 20 minutes or so, until golden brown and slightly puffed. Remove from oven and cool on a rack.

Cool the pie on a rack. Top with any crafty pastry shapes. Chill if you are holding it more than a couple of hours. Serve the pie at room temperature, topped with whipped cream or ice cream.