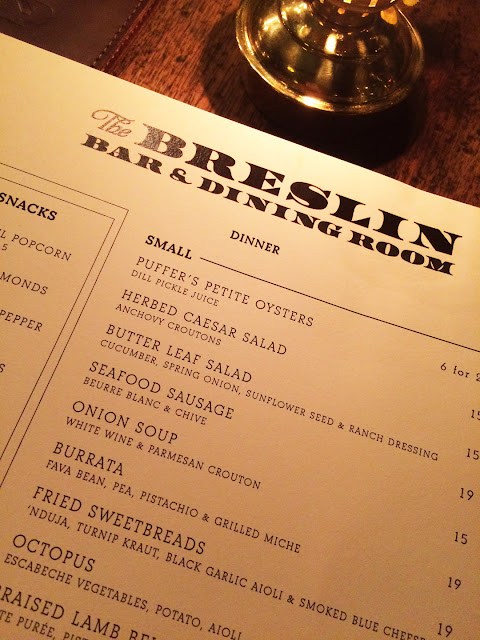 There are some restaurants where everything on the menu looks so appetizing, it's nearly impossible to make a decision. The Breslin is one of them.

When I was in NY for the Summer Fancy Food Show, I did a lot of my eating inside the Javits Center--some cheese here, a little prosciutto there, maybe a bite of energy bar or kale something or gluten-free whatever, and then a bit more cheese, washed down with organic coffee or fancy tea or a shot of mezcal (or three). But even with all that snacking it's possible to be hungry for a sit-down meal. Even after snacking AND having a plate of pasta and a beer at the opening night cocktail party, there's still room for more, particularly if it's fried.

The Breslin, April Bloomfield's Michelin-starred British gastropub in Midtown's Ace Hotel, seems to specialize in fried food. There is a lot of it on the menu, and we ordered most of it, plus oysters on the half shell and a salad. You know, to be healthy. 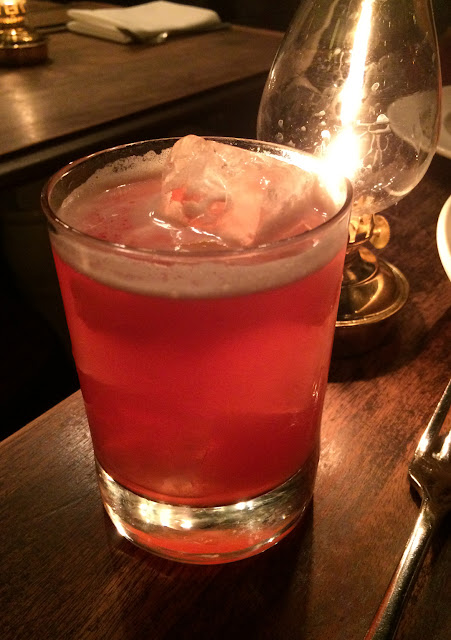 But first - a cocktail. This one was called Life on Mars? and contained Virgil Kane rye, hibiscus, Cardamaro (a cardoon-infused amaro) and pressed lemon. It was bright, both sweet and tangy, with a lovely lemon aroma. 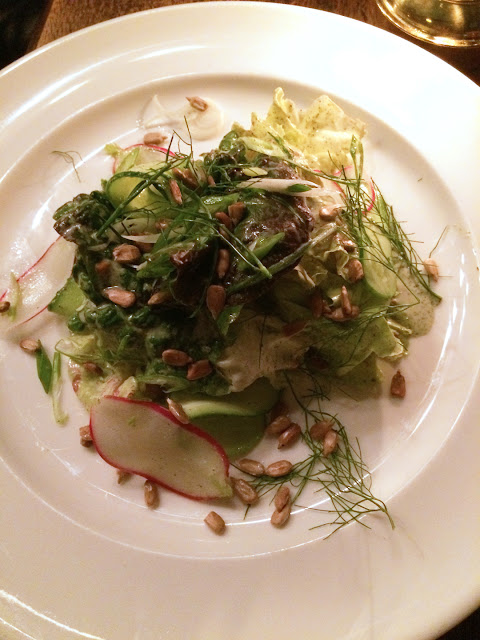 The salad was a simple affair of butter lettuce, cucumber, radish, scallions, crunchy sunflower seeds, and creamy ranch dressing. It wasn't our token vegetable though; we also ordered radishes. They were cooked, possibly lightly deep fried, juicy and tender, with a darkly piquant sauce. 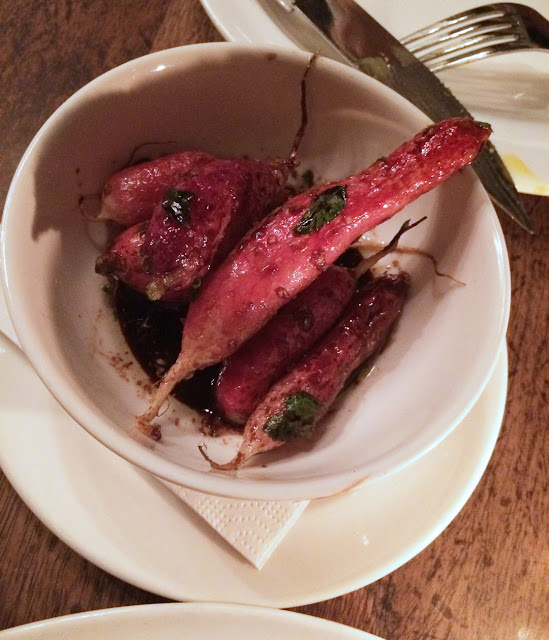 We also enjoyed the beef and Stilton pie. It was a tiny little thing, bursting with shredded meat and the mellow funk of that famed British blue cheese. I wished it was bigger. 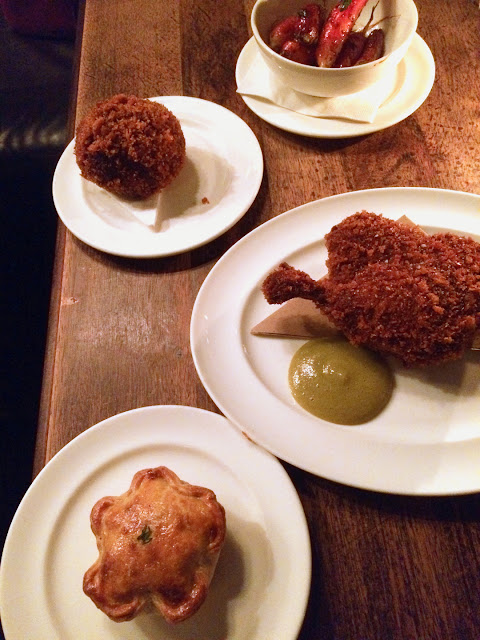 We also shared the Scotch egg. I'm not the biggest Scotch egg fan in the world, because I have a thing about plain pork sausage. We ate a lot of "breakfast" sausage growing up and I never did like the flavor. That's usually the kind of sausage used as a wrapper on a Scotch egg, and of course this one was no different. What was different was the nicely crispy crust on the outside and the perfectly gooey soft-boiled egg on the inside. Cooking an egg like that, peeling it without making a mess, then wrapping it in sausage and deep frying it is a bit of culinary engineering that I can admire. 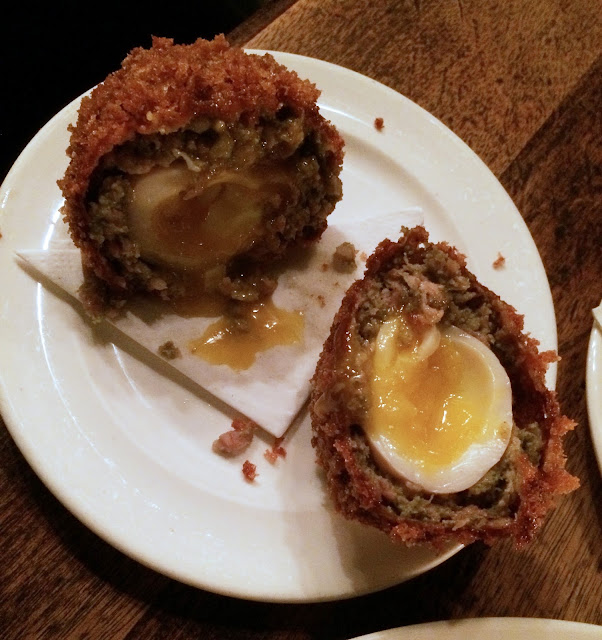 Similarly crispy was the fried duck leg. Meltingly tender on the inside, the meaty confitted leg had just the right amount of luscious fat. Unlike the beef and stilton pie, the duck leg was plenty enough to share without feeling deprived. 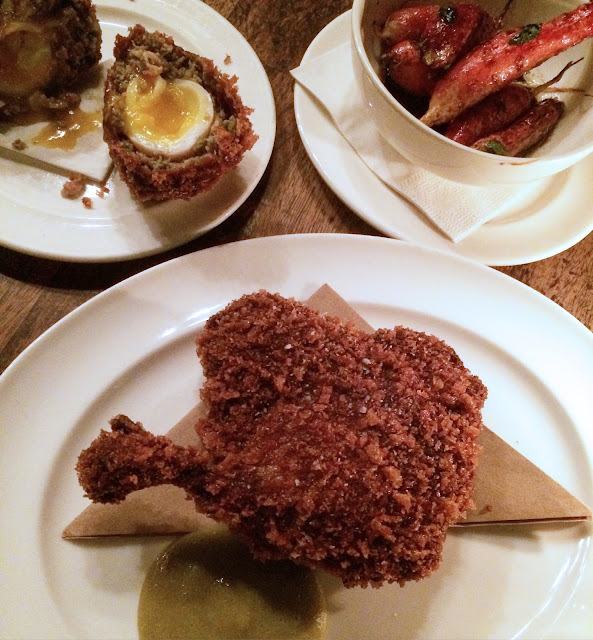 While the savory part of the meal was quite delicious and satisfying, the dessert felt like a cheat. As in we were cheated. The menu description simply said "carrot cake/compressed pineapple/coconut ice cream." The words "carrot cake" conjure up a thick slice of moist brown cake studded with shreds of carrot, nuts, and maybe even a little pineapple, topped with cream cheese frosting. I suppose what we received somewhat evoked the real thing, but was in reality a fussy little arrangement of bits and bobs. Two tiny, crouton-sized, pieces of actual cake, a thumb-sized quenelle of ice cream, some powdered coconut milk, toasted coconut, and a few chunks of pineapple. For $12.

I have nothing against fancy plated desserts, but they really need to be exquisite to earn the hefty price tag they usually wear. The cake was ordinary, the ice cream wasn't particularly flavorful, and coconut milk powder can be purchased in any Asian supermarket, so I hope nobody wasted time and effort producing it in the restaurant kitchen. Considering that The Breslin is very much like an English pub, the arty-farty desserts are not in keeping with the whole theme of the place. Disappointing. 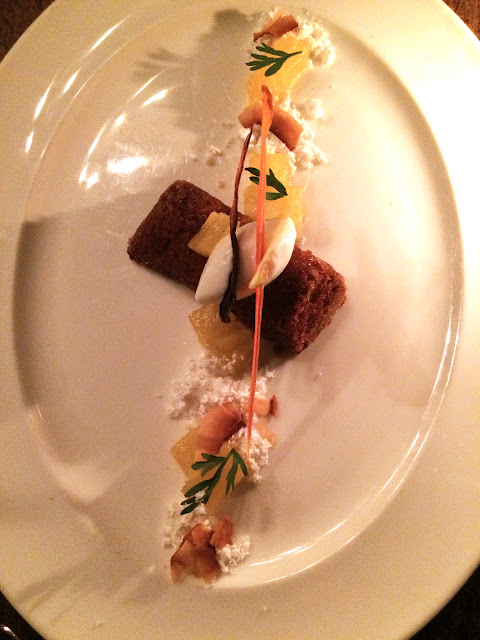 Dessert aside, I enjoyed our meal at The Breslin enough to go back for breakfast the next day.  There were pastries to choose from, lighter dishes like yogurt and granola, and heartier, eggier, options like a full English breakfast. 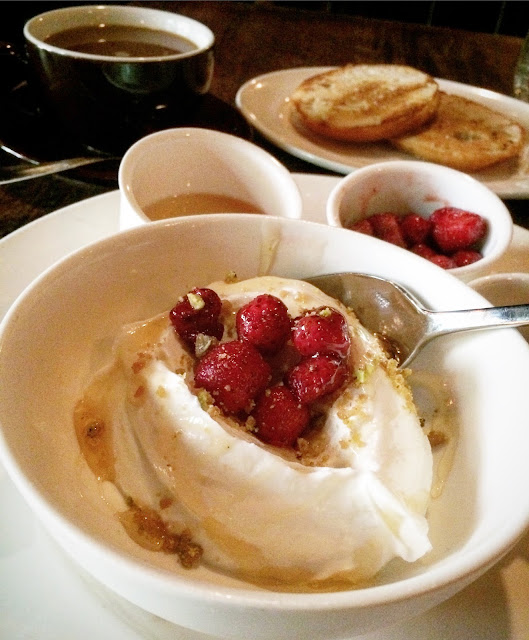 I went for creamy and rich Greek yogurt with tiny, sweet, strawberries, local honey, and pistachio praline, and a house-made buttered English muffin and a cup of Stumptown coffee. It was a satisfying start to the day.