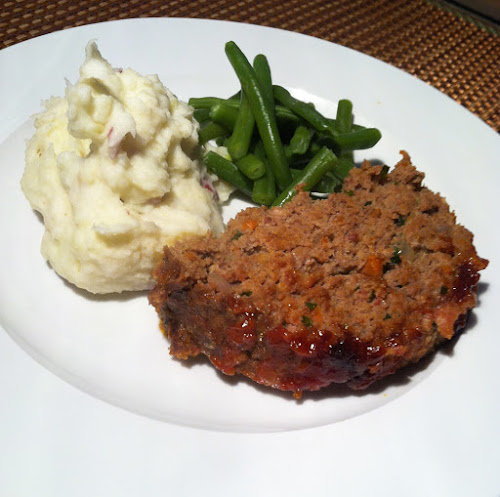 The Classic Catering People, based in Owings Mills, Maryland, have been in business for a lot of years. They are the Ravens official training facility caterer, and they own Miss Shirley's. And they have a lot of recipes in their files, some of which they shared with us.

We had to test 'em out first, of course. Snowpocalypse/Snowmageddon/Snowzilla 2016 Edition seemed a good time to try the meatloaf recipe, supplied by chef John Walsh. With chorizo sausage in addition to the usual pork and beef, the dish was spectacular, tender and moist with lots of meaty flavor, a nice hit of herbaceousness, and a mild sweetness. Mr Minx said it was better than his (and his is fan-freaking-tastic). I'm not willing to go that far, but I will say that I would definitely make this recipe again.

As with most recipes, they're a guideline, not a law. Me being me, I made some adjustments, based on personal taste and on what I had in my pantry. (The recipe below includes the proportions exactly as given to me by TCCP.) I felt 1/2 cup soy and 2 teaspoons salt would be too much, so I cut the amounts of both ingredients by half. We don't have pre-ground pepper and rather than take 15 minutes turning the peppermill to produce 1 1/2 teaspoons (especially with sore arms from spending at least six hours of shoveling snow), I just put in a couple of cranks. Also, I'm not a huge thyme fan, so used only about 1 1/2 tablespoons rather than 1/4 cup (and that still seemed a bit much to my palate. YMMV). Finally, rather than open a whole package of bacon just for four slices, I smeared on a couple tablespoons of bacon jam before adding the bay leaves. Of course, if you don't have bacon jam on hand, you'll just have to use bacon strips.

Preheat oven to 350°F with rack in middle.

Form mixture into an oval loaf in a 13- by 9-inch shallow baking dish. Lay bay leaves on top and shingle bacon strips over loaf. Mix 1/4 cup ketchup and brown sugar together and coat the top of the meatloaf.