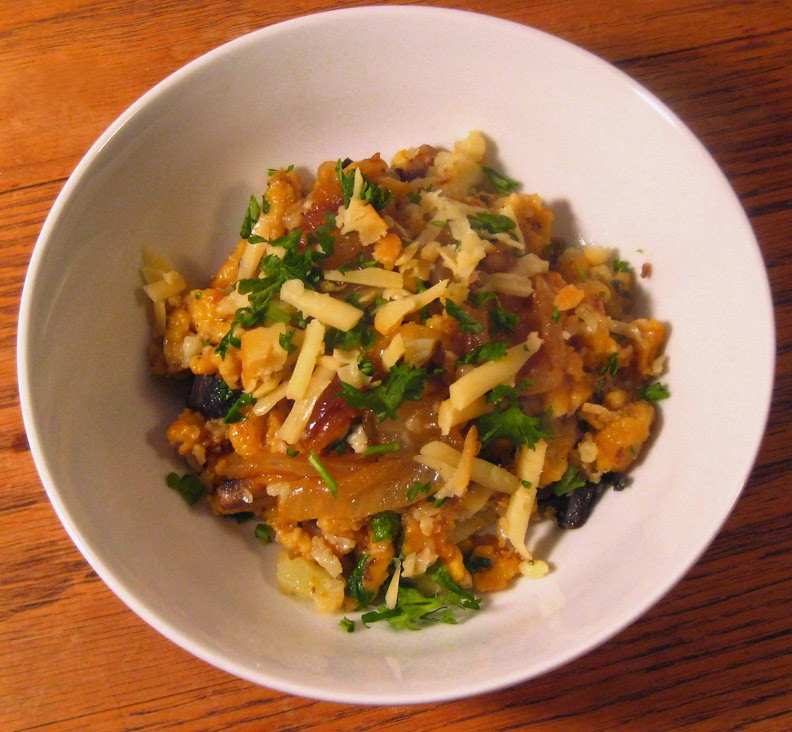 I recently bought a potato ricer that was highly rated by America's Test Kitchen. It came with two plates with differently sized holes; the larger one seemed perfect for spaetzle. I had never made them before, so why not try? The first time we went to Birroteca, almost exactly two years ago, we tried a dish of Parmesan spaetzle with snails. It was unusual and delicious and the memory of it stuck with me. We had a can of snails in the cupboard, so that was that.

We also had a plethora of veg hanging around from a recent CSA delivery: fennel, cauliflower, sugar snap peas, a lone sweet potato, cherry tomatoes. I couldn't quite imagine a spaetzle dish that used all of those veg AND snails, but I thought maybe I could mash the potato and add it to the batter. The cauliflower was the most neutral of the ingredients left, so I figured I could work that in somehow, too.

I looked up spaetzle recipes on the 'net. It seemed simple enough: eggs, flour, milk. One of my favorite bloggers, Deb Perelman of Smitten Kitchen, determined that an egg-rich batter made the lightest noodles. I hoped that adding a cup of mashed sweet potato would contribute enough moisture that I wouldn't have to add as many eggs to my batter as she did (seven!). I put in three eggs as a compromise, as many recipes I found called for just two.

Now that I had the dish figured out (after a run to the store for parsley and smoked Gouda), I was ready to commence cooking. Little did I know that I'd be using three pots, a colander, a potato masher, a baking pan, and multiple bowls for this project. I think I washed more dishes (without a dish washer) than I cooked actual food! The batter is sticky and made a mess, and the spaetzle never dried out completely so they had to spend quite a bit of time in the saute pan to get even a little crusty, but in the end, it was all worth it. So worth it. The noodles were tender, the cauliflower added a bit of crisp texture, and all of the flavors went together wonderfully.

Mr Minx said it was restaurant quality. I thought so to. Would definitely do it again, especially now that I have a batch of already cooked spaetzle in the freezer.

To make the spaetzle: Combine the sweet potato, eggs, milk, and salt in a large bowl. Stir in the flour. Cover bowl with plastic and refrigerate for one hour or overnight.

Bring a large pot of salted water to a boil. Fill a large bowl with ice and water and set near the stove.

Place the large hole blade into your potato ricer. Fill ricer half full with batter and squeeze gently into the boiling water, shaking the noodles loose as you squeeze. Use a spoon to cut the noodles that refuse to break off on their own, then stir the pot vigorously to keep noodles separate. I got three squeezes of noodles out of one half-full ricer, but your mileage may vary, depending on the size of your ricer. Boil for 2-3 minutes, then use a slotted spoon to remove noodles to the ice bath. Repeat with remaining batter until it's all gone.

Remove spaetzle from ice bath and place in a colander over a bowl to catch any drainage. Drizzle on a bit of olive oil. Store in the fridge in a tightly covered container until ready to use. This recipe makes quite a bit of spaetzle, so you may want to freeze some. I put about half of it in a zip top bag and spread it out flat so the noodles weren't clumped together and put it in the freezer that way. If you are lucky enough to have a big empty freezer, spread the noodles onto a parchment-lined cookie sheet and freeze them individually. When frozen, dump them into a zip top bag and put back in the freezer. This way they stay separate and won't turn into a big lump.

To finish the dish: While the spaetzle batter is resting in the fridge, you can do some of the prep. Cook the onion over medium heat in a mixture of olive oil and butter with a pinch of salt until very soft, brown, and caramelized, about 30 minutes.

Heat a bit of olive oil in a large skillet. When it is screaming hot, add the cauliflower and cover the pan. Cook, stirring occasionally, until the cauliflower is tender and browned in areas, about 10 minutes. Remove cauliflower to a bowl and set aside.

Drain the escargots and place in a bowl. Cover with cold water and let them soak for 10 minutes or so. Drain again and cut the escargots into thirds or quarters, depending on size (the ones I had were mammoth). Put a bit of olive oil in a skillet and cook the mushrooms until they give up their juices. Add the escargots and a pat of butter. Turn the heat to low and add the garlic. Cook about 5 minutes until everything is warm and garlic is no longer raw. Remove from heat and set aside.

Once your spaetzle has been cooked and drained thoroughly, heat up a large skillet. Add a bit of olive oil and about half the spaetzle (the rest you can freeze or refrigerate to eat later). Cook, stirring occasionally, until the spaetzle is lightly browned in spots and vaguely crispy, about 15-20 minutes. (If you managed to get them really dry, it might take less time.) Stir in the cooked cauliflower, the cooked mushrooms and escargots, and about half the parsley. Once everything is warmed through, spoon into serving bowls. Garnish with a big spoonful of caramelized onions, the remaining parsley and shredded Gouda. 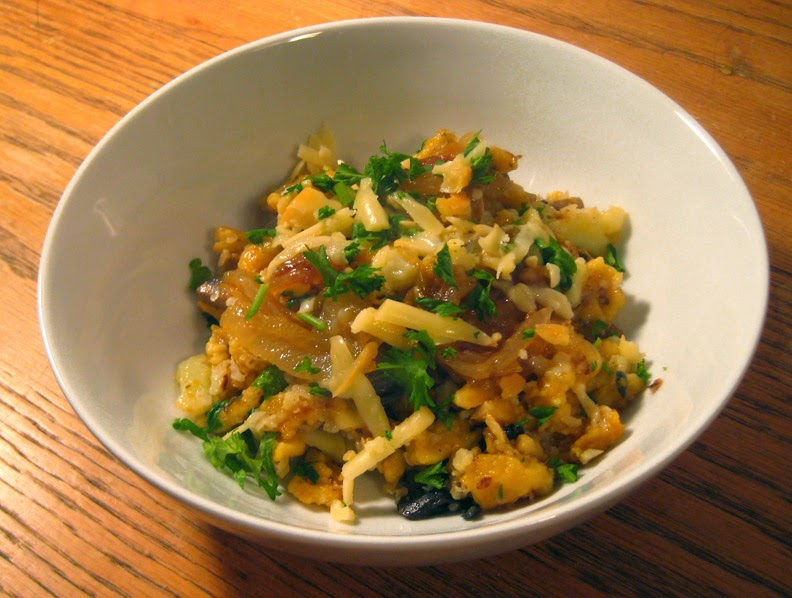